After an entire day in airports and on planes, from New York to California to New Zealand, the temptation to stay in my comfortable king-size bed in my darkened hotel room and hibernate for a day was eroding my will to go out and explore. But Auckland has too much to experience to sleep it all away. So, after a restorative power nap, I began poking around the largest city in the country. Read about the top five things to see and do in Auckland, New Zealand >

I was returning to Auckland via ferry from breakfast and a low-key morning in Devonport. Ahead of me, the skyline of New Zealand’s largest city marched along the harborfront, dominated by modern office and residential towers. With the exception of the Sky Tower and the cheerful Ferry Terminal, this fairly generic skyline could be interchanged most anywhere — Vancouver, for example, or Miami or Honolulu. Once I looked beyond that, however, I found that the city has an impressive list of heritage buildings, more than 200 structures with significant and valued historical and cultural heritage. Read more about the top five buildings in Auckland >

Halloween does not necessarily hold a monopoly on eerie ghost stories; something creepy can happen any day of the year. For me, it was early evening on an ordinary day in November, when I was wandering around the oldest cemetery in Auckland, New Zealand — a fairly neglected and lonesome graveyard that hasn’t seen a new burial in about a century and is littered with decaying tombstones. Throw in a man who appears out of nowhere and disappears just as suddenly, and I was ready to outdo Stephen King. Read more > 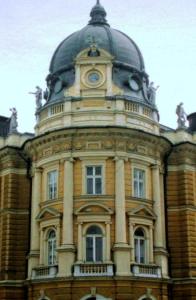 In the present era of instantaneous communication and e-everything, post offices around the world are in serious decline. But it wasn’t all that long ago when post offices were the lifeline of nations, delivering long-anticipated letters, critical documents, history-making news, and packages of all shapes and sizes. Their vital importance was reflected in the grandeur of the buildings that housed them . Although some of them no longer serve their original purpose, these are my five favorite post offices in the world. Read more >