Roaming around Alabama, I was impressed by the sheer number of the state’s historic districts. Each one was a little different from the others, but their commonalities — beautiful structures of local and national importance, many registered as U.S. landmarks, many in lovely settings — stitched them together into one wonderful display of architectural styles and significance. Exploring these districts is one of the top five things to do in Alabama, and you’ll soon be hard-pressed to pick the ones that dazzle you the most. These are my favorites. 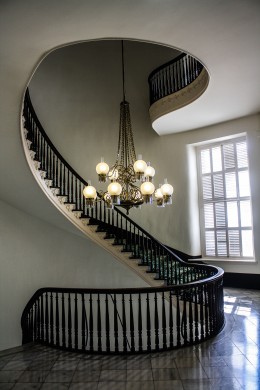 From Court Square Fountain, dripping with water dyed pink for a cancer awareness event, I had a fine view up wide Dexter Avenue to the Alabama State Capitol, six blocks away, its white façade gleaming brightly on a perfectly sunny day. I strolled around the grounds surrounding the capitol first, contemplating the controversial Confederate Memorial Monument, honoring more than 122,000 Confederate veterans of the Civil War, and the decidedly less controversial Moon Tree, a loblolly pine grown from seeds that journeyed to the moon on the Apollo 14 mission in 1971. Then I took a better look at the building itself — one of the most architecturally understated but historically critical capitol buildings in the United States. Completed in 1851 (with later additions), the Greek Revival beauty was declared a National Historic Landmark in 1960. This building, one of the top five buildings in Montgomery, served as the first capitol of the Confederate States of America before Richmond, Virginia, replaced it. It was also this building in which delegates from the Southern states voted to secede from the Union; Jefferson Davis was sworn in as the first, and only, president of the Confederacy; and the permanent Constitution of the Confederacy was adopted. A century later, the third Selma-to-Montgomery march terminated here in 1965. I climbed the marble staircase that leads up to the shallow portico with half a dozen columns, black and white clock, and smooth dome with windowed lantern. The fairly simple interior is notable for two items in particular: the eight murals painted on the dome interior that depict the state’s historic events, starting with the meeting between de Soto and Tuskaloosa in 1540 and ending with the state’s prosperity in the late 1800s and early 1900s, and the remarkable cantilevered helix-like staircases — designed and built by a former slave only a few years after he received his freedom. 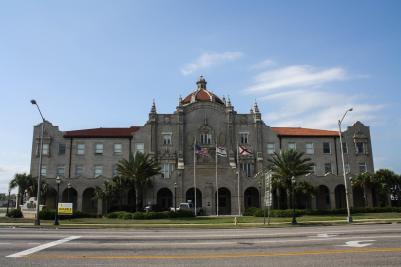 About a mile north of historic Bienville Square, where I had enjoyed a bag of chocolate-covered peanuts and Cajun peanuts from a local shop, I came across the striking Gulf, Mobile and Ohio Passenger Terminal. One of the city’s grandest structures, and one of Alabama’s two largest train stations, this historic terminal dates back to 1907, when its construction was completed for a total cost of $575,000. Designed for the Mobile and Ohio Railroad by architect P. Thornton Marye, whose works include other rail terminals as well as theaters and churches, in an attempt to help the city draw trade away from New Orleans, this wonderful Mission Revival–style terminal drips of Spanish influence. An arcade runs along the entire width of the front of the cream-colored building. The central façade looks like a modified version of a palace you’d spy in Madrid, with pinnacles and busy window frameworks, and a dome with a lantern tops the red-tile roof. The Mobile and Ohio merged with the Gulf, Mobile and Northern Railroad in 1940, and the new company continued service here until the late 1950s. It remained the offices of the railroad until being completely vacated in 1986. Despite being placed on the National Register of Historic Places in 1975, it suffered nearly three decades of neglect. Named a “Place in Peril” by the Alabama Trust for Historic Preservation in 1996, it wasn’t until 2001 that the City of Mobile and a private company invested more than $18 million for the building’s revitalization, a plan that was derailed when Hurricane Katrina caused extensive water damage in 2005. Today, however, the GM&O Terminal survives as a fine example of adaptive reuse, currently serving as the home of the South Alabama Regional Planning Commission, and is well worth the walk from downtown Mobile to appreciate its beauty. 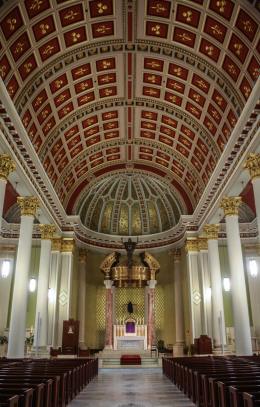 Since 1850, the Cathedral Basilica of the Immaculate Conception has been serving Roman Catholics in Mobile, although in a very incomplete building, not like the wonderful structure I was gawking at from the grassy Cathedral Square before it. Designed in 1833 by a seminarian-turned-architect, the cathedral broke ground in 1835, but financial shortfalls and delays in progress postponed its opening until 1850, with an incomplete form. Not until 1884 did the cathedral receive its finishing touches. Painted a deep salmon and surrounded by a lovely cast-iron fence, the cathedral features an unembellished portico with dentils supported by eight Doric columns. On either side of it, twin domed bell towers are topped with gold crosses, reaching up to 103 feet, and are anchored by two large stained-glass windows, one portraying the baptism of Jesus, the other depicting St. Cecilia, patron saint of musicians (located, appropriately, in the stairway up to the choir loft). Inside, the columns are upgraded to Corinthian, and the salmon color continues, on the barrel ceilings of both the side aisles and the nave (with alternating panels of gold shamrocks and fleur-de-lis—acknowledging the distinct contributions of the Irish and the French, but both equally representing the Trinity). The dozen beautiful stained-glass windows were made in Munich, Germany, and were added to the cathedral between 1890 and 1910, each depicting a key moment in the life of Mary. I walked down the white marble floor of the main aisle, noting the coats-of-arms of the Mobile bishops and archbishops embedded within, to the bronze baldachin above the altar, supported by four marble columns, that stands under the golden dome. A lime-green mural of Mary and the Tree of Jesse rises above the very modern organ. Listed on the National Register of Historic Places as a contributing property to both the Church Street East Historic District and the Lower Dauphin Street Historic District, the cathedral has seen its share of damage and destruction, such as a nearby explosion that blew out the windows on one side during the Civil War, a pilot trainee who clipped one of the towers during World War II, and a fire in 1954 that caused extensive damage to the interior from the flames, the smoke, and the water from the firefighters’ hoses. In 1962, however, the cathedral received better news, when Pope John XXIII elevated it to a minor basilica — an honor that can be bestowed only by the pope, on churches of historical and spiritual importance. 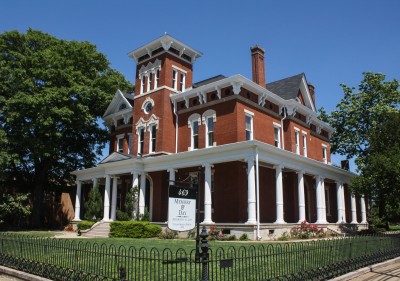 Stately, elegant, and refined, this perfect Southern home was constructed in 1888 for Civil War veteran and real estate businessman Archibald Pitt Tyson, whose daughter occupied the premises following her marriage to lawyer and member of the Alabama State House of Representatives Olin Connor Maner. Added to the National Register of Historic Places in 1979, this very handsome home was built in the Italian Villa style just as that architectural trend was beginning to wane. Located in one of Montgomery’s historic districts, the brick house boasts a number of notable features, including a wonderful central Tuscan tower, wraparound porch supported by semi-fluted Ionic columns, circle top windows, brackets at the roofline in between circular windows, and five slender chimneys. The Tyson-Maner House is now occupied by offices for a law firm, which has done an extremely fine job of preserving its beauty. 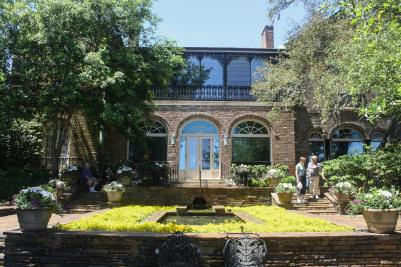 I traveled to the small city of Theodore, a short drive from Mobile astride Fowl River, to see the renowned 65-acre gardens at the Bellingrath estate, but the mansion itself proved to be just as remarkable — an unexpected delight in this city with a population that has never exceeded 7,000. Despite its size, Walter Bellingrath, Mobile’s first Coca-Cola bottler, and his wife, Bessie, chose Theodore as the site of their new home. Designed by a local architect and completed in 1936, the 15-room, 10,500-square-foot house has always been a tasteful combination of old and new. The exterior, for instance, features flagstone terraces, balconies, and a Mediterranean central courtyard with a pool and tiled fountain. Monogrammed drain heads add personal touches to a mundane practicality. Handmade bricks from the 1852 birthplace of multi-millionaire socialite and suffragist Alva Vanderbilt were repurposed here, and cast-iron columns and ironwork obtained from a recently demolished hotel were salvaged to create galleries, balconies, and railings. The interior, however, achieved the epitome of modernity for its time — except for electricity, which hadn’t extended to this part of the county yet. I took the mansion tour, with my guide pointing out the perfectly preserved private and public rooms and their meticulously appointed furnishings, and the kitchen, with its original tile, marble, and appliances, and a deep collection of silver, china, and crystal in the butler’s pantry. Opened to the public in 1956, this Southern estate was added to the National Register of Historic Places in 1982, all in keeping with the Bellingraths’ wishes to share their home and gardens with all visitors.