Let’s face it: Death by crucifixion is pretty nasty. First, you endure the pain of having nails driven into the feet and, depending on your executioner’s methods, the hands, wrists, or lower forearms. Second, you’re left to hang there, exposed to the elements, including animals. Third, you’re denied any nutrition. Fourth, your shoulders begin to separate from their sockets. And last, after a long, slow, excruciating dying process, you eventually succumb to anything from heart failure to dehydration to a pulmonary embolism. Even Jesus Himself wasn’t too fond of it, beseeching, “Father, if You are willing, remove this cup from Me.” For 2,000 years, this scene on which the entire Christian faith rests has been represented in art in all kinds of media. These are my favorites.

The highlight of Zagreb’s under-visited Croatian Museum of Naïve Art (only about 15,000 patrons per year, even though it’s one of the best museums in Croatia) is also the most astounding Crucifixion I’ve ever come upon. Ivan Večenaj’s 1966 painting Evangelists on Calvary is a gruesome and utterly riveting masterpiece. Saturated with vivid colors, this arresting painting focuses on a gray-skinned Jesus, His body drained of blood that pours freely from His wounds and the thorny crown. His arms appear extra-long, perhaps from having actually stretched while He hung from His wooden torture device. What makes this masterpiece even more gripping is everything that’s occurring around Him: the Four Evangelists who appear on either side in their symbolic form, the tortured bodies of the two thieves who were crucified beside Christ, the minatory storm clouds, and the angry blood-red sky. This is not a peaceful or mournful or contemplative scene; it’s lonesome, brutal, and tempestuous. And it’s something you’ll never forget.

Večenaj doesn’t hold a monopoly on unique Crucifixions. The wonderfully untraditional representation created by Salvador Dalí in his Christ of Saint John of the Cross is a one-of-a-kind tour de force, too. Completed in 1951, the painting’s name derives from the basis of Dalí’s work, a drawing by the 16th-century Spanish friar St. John of the Cross. Housed by itself in an intimate room in Glasgow’s fantastic Kelvingrove Art Gallery and Museum, Dalí’s work broke with conventional portrayals of the Crucifixion by employing an unorthodox angle: from above. This unique angle of view emphasizes the pain of such an execution, which Dalí further stresses by not revealing Jesus’ face — a choice he made because he was convinced showing any agony on His face would compromise the purity of the scene. For the same reasons, Dalí opted not to include the crown of thorns, nails, or any blood. Rather, we see Jesus looking down on a body of water, with fishermen and their boat, as He remains suspended from a cross floating above it. The top of His head punctuates the bottom point of a triangle (representing the Holy Trinity) formed by the top bar of the cross and Jesus’ arms. Dalí was extraordinarily committed to getting this right: He hired a Hollywood stuntman and suspended him from a gantry to see how a body would appear from the angle he was envisioning. Dalí’s devotion to his craft paid off: This extraordinary work of art was named Scotland’s favorite painting in 2006. 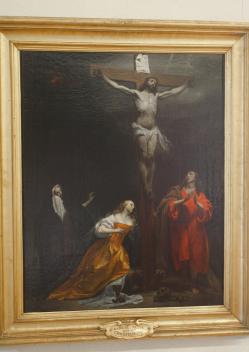 Like my two favorite crucifixes, this one also has something quite different about it. Painted by the Dutch artist Gabriel Metsu in 1664 and housed in Rome’s Capitoline Museums, Crucifixion, a brilliant artwork of high theatricality, contains not one, but several unique elements. Metsu puts a new twist on the four figures that almost always appear in a crucifixion scene, giving the two supporting players the lead roles by his bold color choices. My eye went first to Mary Magdalene, clad in a brilliant orange dress and sporting scarlet lips. Modeled after Metsu’s wife, she’s placed in a central position, clutching her breast in a display of ecstatic agony. Next to her, St. John in his striking red robe holds his hands not clasped in deep prayer or sorrow, but with fingertips barely touching. He’s active, taking a step forward and looking upward at his dead savior. I followed his gaze and only then does Jesus garner some attention. His pale body, blood still dripping from His hands, stands out against a dramatically darkened sky with a brush of an eclipsed sun. Nailed into the wood above His head is not the usual INRI (the Latin abbreviation for “Jesus of Nazareth, King of the Jews”) inscription but rather a dog-eared paper with “Jesus of Nazareth, King of the Jews” spelled out in Hebrew, Greek, and Latin. And where is Mary, Jesus’ mother, in all of this? She’s off to the side, dressed in dark cloaks that make her almost inseparable from the background save for her skin and the white kerchief she holds to wipe away tears.

Constructed in the 1100s in one of the oldest parts of Venice, this church was dedicated to St. Nicholas of Myra. In recognition of the poor working classes in the parish, it adopted the name “dei Mendicoli,” which means “of the beggars,” and the unadorned façade indicates that there wasn’t much wealth here. The simple 15th-century porch (one of only two church porches remaining in Venice) and the small canalside campo beside it echo the dearth of rich parishoners. The inside, however, despite its lack of works by superstar artists, is glorious. And surveying it all is the crucifix above — far above — you that commands attention. Atop the three-arched screen between the nave and the apse, Jesus looks down on everyone walking down the central aisle toward the altar, reinforcing the meaning of the Communion wafer they might be about to receive. If this crucifix looks familiar, you probably noticed it in the overrated 1973 thriller Don’t Look Now, starring Donald Sutherland, whose character conducts his restoration work in this church. Perhaps inspired by Sutherland’s role, the British Venice in Peril Fund underwrote extensive renovations to San Nicolò, which were completed in 1977, leaving as its legacy this restored and wonderful church. 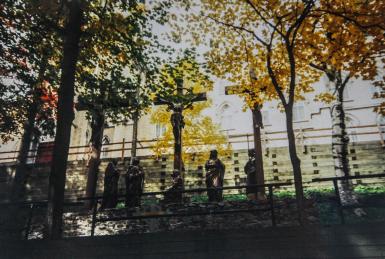 Twenty miles east of Québec City along the St. Lawrence River, the Basilica of Sainte-Anne-de-Beaupré draws half a million people every year who have faith that this place of miracles will cure them or a loved one of an array afflictions, illnesses, and diseases. Even if you’re not here on such a pilgrimage, you’ll still be impressed by this beautiful church as well as the Way of the Cross next to it. On a hillside beside the tremendous basilica, the 14 Stations of the Cross are positioned alongside a switchback path, inviting visitors to experience the final hours of the Passion of Christ. Each Station comprises a group of about five life-size bronze figures, cast in France starting in 1913 and not completed until 1945. As you ascend the hill, proceeding farther away from the basilica and its constant flow of visitors and tour buses, quiet takes over. The feeling of solemnity grows as you look uphill and ahead to glimpse the upcoming Stations in between the trees. Along the way, you’ll meet Mary, Simon of Cyrene, Veronica, and Roman soldiers, eventually arriving at Station XII, when Jesus dies on the cross. The tremendous artistry of the sculptors is matched by the drama of the approach. Unlike my favorite crucifixion in the Croatian Museum of Naïve Art, this one is peaceful and reflective.