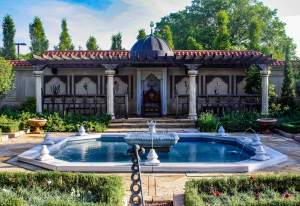 The Ottoman Garden: an enclosed space of Eastern tranquility.

My week in Missouri was filling up with a collection of eclectic pursuits: exploring one of the world’s top five caverns, meeting the Anheuser-Busch Klondike horses, roaming around a cemetery in a fierce thunderstorm. It was no surprise that I’d score another fond memory when I visited the second-largest botanic garden in North America, outsized only by the New York Botanical Garden in the Bronx.

Created in 1859, the Missouri Botanical Garden is the oldest botanic garden in continuous operation in the United States. After a few hours here, I can attest that it’s also the most beautiful in the country. Apparently, my high regard for it is not unique: It has been declared a National Historic Landmark, listed on the National Register of Historic Places, and placed in the top 10 botanic gardens by USA Today, the Travel Channel, and AFAR, among others.

This 79-acre sensory delight for your eyes and nose is more than merely a pleasant stroll; the garden also conducts important botanical research and science education. But that’s not really why you’re visiting. You’re here to see the 27,000 plants on permanent display. And we have an immigrant, Henry Shaw, to thank for it: Forty years after he arrived in St. Louis from England at age 18, Shaw created and opened the garden for the city’s residents to enjoy. 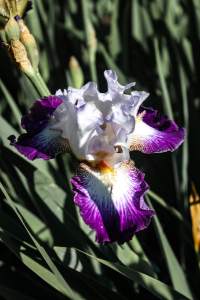 The garden boasts an impressive collection of colorful irises.

Almost immediately after entering the garden, I came upon one of its highlights — the Ottoman Garden. Enclosing the garden, a stucco wall with a terracotta tile roof had iron grille windows that afforded me an advance peek into the quarter-acre garden. I entered this garden — a replica of a 17th-century courtyard — via a double wooden door gateway and was welcomed by an Ottoman sundial, based on one at Istanbul’s Topkapi Palace. Geographical luck puts St. Louis and Istanbul at approximately the same latitude, enabling the former to feature many of the plants that would have been found in the latter’s imperial gardens. The lush flora comprises an abundance of plants functioning primarily for their fragrance, fruit, and color, including roses, tulips, and pomegranates. Soothing water features include a stone pedestal fountain and the garden’s central focal point, a shallow pool of water circled by small jets spouting water toward the stone water bowl in the center of the pool, representing the Source of Life giving birth to the River of Paradise. At the opposite end of the garden, a paved patio covered with a wooden arbor and a dome offered cooling shade while I admired the painted murals of various flowers favored by the Ottomans.

This wonderful introduction established an elevated standard for the rest of the garden, which it easily achieved with its stunning horticultural displays. Nearly five thousand trees representing 624 unique species provide a background to the garden’s riches. The renowned Iris Garden explodes every spring into a full spectrum of colors — more than 1,200 bearded, beardless, Louisiana, Siberian, and other irises bloom into maroons and golds, purples and whites. Rich fragrances emanate from the two rose gardens, while the herb garden offers up its own culinary aromas. Magnolias, camellias, and azaleas, as well as one of the world’s largest collections of rare and endangered orchids, show off vibrant colors. Of course, unexpected exhibits add to the garden’s pleasures, including four works of art by master glassmaker Dale Chihuly, purchases the garden made after a 2006 special exhibit of his work here.

A brick path leads to the Victorian Garden, the yellow-sided Piper Observatory, and the Kaeser Maze, a labyrinth of yew hedges and paths. If you don’t feel like playing mouse trying to reach the prize, a vine-covered gazebo, you can watch others testing their innate GPS skills, as the sunken maze offers spectators an overhead view. 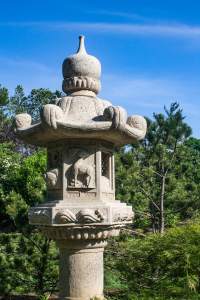 I moved through an international trio — the German, Bavarian, and English Woodland gardens — before arriving at a fourth, the wonderful 14-acre Seiwa-en Japanese Garden. Popular among 17th- and 18th-century Japanese feudal lords, these gardens typically feature lawn areas, architectural and water elements, and symbolic flora. The one in St. Louis — one of the largest Japanese gardens in the United States, and one of my favorite sections here — invited me to discover along its winding path. The irregularly shaped four-acre lake is the central focus, and from any spot along its perimeter I found a different vista — a concentration of lily pads, ducks rippling the placid surface as they traversed the water, the carefully designed waterfalls, the raked dry gravel gardens with patterns representing ocean waves and with circles so perfect they would surpass any mathematician’s compass. Four islands float in the lake, one of which is accessible by foot via traditional Japanese bridges, including one arched bridge that makes a circle in its own reflection in the water. A herringbone-pattern wooden boardwalk zig-zags over part of the lakeshore, and flat stone benches in the shape of flowers provide a peaceful place to sit and contemplate the brilliant maroon leaves of the Japanese maple tree above you. Stone lanterns add more authenticity to the garden, and the koi pond introduces you to some very hungry fish.

After completing my loop around the lake, I strolled over to the Ruth Palmer Blanke Boxwood Garden, one of the most peaceful spots in the garden. Approached via a brick courtyard with a fountain and circles in the brick walls through which you could gaze into the garden, this parterre contains 60 unique varieties of boxwood, a classic garden shrub. Stone paths wend around boxwood expertly formed into geometric shapes and lead to a pavilion ringed by a balustrade and topped with a bell-shaped dome.

Close to the boxwoods, one of St. Louis’ sister cities, Nanjing, China, gifted a moon gate, lotus gate, and pavilion — integral parts of the wonderful Margaret Grigg Nanjing Friendship Chinese Garden, modeled after “scholar’s gardens” popular in southern China. A gray and white stone mosaic welcome mat of sorts greeted me as I entered the garden through the red gate in between the white walls with inset ornate windows and topped with undulating ceramic tiles that conjure up images of a dragon’s movement and skin. Within the garden, architectural elements, such as the bridges, walls, and stone pavings tap traditional colors of a southern Chinese garden — black, gray, reddish brown, and white. Fantastic pavilions provide wonderful resting spots, underneath ceramic tile roofs with swooping ribs and curves that seem to smile. Nature surrounds these features with water elements, limestone boulders, and plants that have spiritual significance in the Chinese culture, such as plum trees, bamboos, pine, lotuses, and hibiscus. 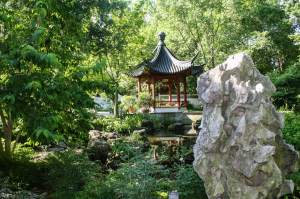 Toward the end of my visit, I popped indoors, into the Climatron, the world’s first geodesic dome greenhouse, added to the garden in 1960. With no interior support, the dome reaches a height of 70 feet, covering half an acre of a rain forest display. In this climate-controlled bubble with an average humidity of 85 percent, more than 2,800 plants flourish in the tropical conditions, including banana, cacao, coconut, coffee, and orchid. The dense green foliage gives way to a small native hut, waterfalls, rocky cliffs, an aquarium with river fish, and a bridge.

Special cultural events during the year add to the garden’s appeal, offering activities you would not ordinarily expect from a botanic garden — sumo wrestling and kimono fashion shows during the Japanese Festival, for instance, or acrobats and tai chi meditation during Chinese Cultural Days. But even if you’re not here for such occasions, you’ll find treats all year long, as different plants bloom at different times, and the four seasons each bring their own special magic to the most beautiful botanic garden in the United States.