I had already seen one castle in Denmark, Christiansborg Slot in Copenhagen. Now it was time to see another, outside the capital. I boarded a train for an hour ride north up the coast of Zealand, with its views of wealthy suburbs, finely manicured golf courses, some windmill farms, and fields of purple, yellow, and red flowers.

The castle’s courtyard makes for an impressive introduction to old Danish royalty.

I arrived in the city of Helsingør, home of Elsinore, also known as Kronborg Slot — the setting for William Shakespeare’s Hamlet. From the train station, I walked through town, passing a shop with a tempting query to potential customers (“To Buy or Not to Buy”) on my way to the castle. Statues of Hamlet and Ophelia stand along the street by the outer wall of Kronborg Slot, reminding everyone that something rotten happened in this state a few hundred years ago. But it’s all a myth, of course. Shakespeare never went to Denmark, and fictional Hamlet, obviously, did not take place here. Nevertheless, the play has been staged here for decades, attracting such actors as Claire Bloom, Kenneth Brannagh, Richard Burton, Sir John Gielgud, Derek Jacobi, Jude Law, Vivian Leigh, Sir Laurence Olivier, Christopher Plummer, and Michael Redgrave.

The original building on this spot was erected in the 1420s as a stronghold that controlled the entranceway to the Baltic Sea. Radically transformed in the late 1500s, the new castle was largely destroyed by a fire in 1629. King Christian IV wanted to rebuild it, but he needed money. He was denied funds, however, by the few people who could have denied him. So he decided to raise the existing tax on the ships sailing through the Øresund at its narrowest point between Denmark and parts of present-day Sweden that were held by Denmark at that time. These compulsory “sound dues” were quite a substantial source of revenue, but Christian said that when he had collected enough and the castle was rebuilt, he would remove the additional tax. Believe it or not, he stuck by his word — rather unusual for an autocrat, but not really for Denmark, considering that the modern nation is consistently ranked as one of the most honest countries in the world in which to do business.

Sacked by the Swedes in 1658, the castle lost much of its art treasures, and in 1785 it no longer served as a royal residence, converted into army barracks. The army left the castle in 1923, and following a tremendous renovation it was reopened to the public in 1938. Today, Kronborg Slot is one of Denmark’s top tourist attractions — no surprise, given its status as one of the most important Renaissance castles in Northern Europe and its inclusion on UNESCO’s World Heritage Sites list.

I circled around the sturdy defensive bastions, topped with lines of cannons, that protect the castle. From here, I could see Sweden very clearly and waved hello to the country I would visit five years later. I entered the bustling inner courtyard for my first look at this beautiful sandstone structure, with its spires and towers, simple and flamboyant dormer windows, abundant fenestration, and copper roofs turned verdigris green. 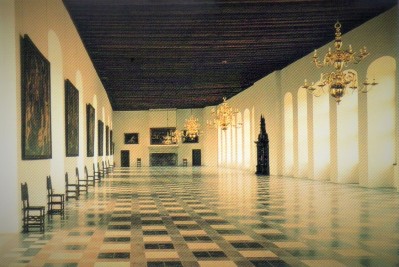 The second-largest ballroom in Europe was the scene of gluttonous feasting.

My first stop inside was the chapel, which was built in 1582 and survived the 1629 fire. It didn’t, however, escape completely unscathed from the castle’s time as the army barracks, when the furniture was stowed away and it was converted into a gymnasium and fencing hall. Now restored, the elaborate wood carvings and the interior fittings — the organ and chandeliers, colorful pulpit, gilded everything — are fantastic. I particularly appreciated the carved tops of the pew ends, including a blond figure holding an open prayer book. Is it an angel or a Dane? Hard to say.

I meandered through the royal apartments, where spying and privacy were of the utmost importance. The bay window in the King’s Chamber, for instance, is situated directly above the castle’s main portal, enabling him to keep an eye on who was coming and going. To guarantee the privacy of the queen, the door to her bedroom has two keyholes, one on the right and one on the left, neither of which goes all the way through the door, so no one could peep in.

When I stepped into the unfurnished Great Ballroom, I was entering the longest such room in Scandinavia and the second largest in all of Europe, surpassed only by the one at Versailles. At just over 200’ long, the room features a tricolor marble floor and seven brass chandeliers hanging from the carved wood ceiling. Guests would gather here to gorge themselves on 65-course banquets, which would explain why each guest received his or her own vomiting bucket. If, however, they preferred to disgorge their stomach privately, a separate “vomit room” with piping and a tub accommodated their needs before they returned to their table to continue their Lucullan feast.

If and when the time comes, Holger Danske will rise and save the day.

In the Little Hall, I found a wonderful historic curiosity. Seven tapestries, from an original series of 40, hang on the walls. The tapestries depict Danish kings, so when the Swedes ransacked the place and took off with their booty, they left these behind; after all, why would Swedes want an image of Danish royalty adorning their walls? Their prideful rapine, or perhaps their lack of artistic appreciation (these tapestries are quite fine), resulted in a big win for Kronborg.

I completed my visit by descending into the casements and gloomy dungeons to meet the castle’s only permanent resident, even though he’s asleep. Dimly lit and with low ceilings (and hardly any other visitors), the casements stretch for a good length through the castle. I followed the faint arrows on the uneven ground through this creepy underworld of passageways until I came face to face with Holger Danske. Illuminated by one small candle, this statue of Ogier the Dane, a brooding, bearded, long-haired Viking chief, may very well give you the jitters. As foreboding as he appears, however, his legend is more comforting, at least to Danes: He will rise to protect Denmark if any external enemies should ever threaten the country. Judging by his looks and physique, with those big arms and solid legs, and the very long sword he’s holding, I’d say he would probably win.