Whether you’re behind the wheel of your car (driving on the right or the left, as national practice dictates) or a passenger, you’ll always experience a thrill when you end up on a scenic road, whether it’s by accident, by following the little green dots on your old Rand McNally atlas, or by a malfunction of your GPS. Some of the best drives in the world offer stunning scenery, sweeping views, and occasional wildlife on routes that are never crowded; others could be jam-packed with traffic during high seasons, the only benefit of which is that it forces you to slow down and appreciate what surrounds you. Either way, when there’s so much beauty to see through your windshield, keeping your eyes on the road could be a challenge, but it’s a challenge you’ll remember forever. These are my favorites.

I didn’t choose this road in order to see anything particular along the way, or to get from one destination to the next; I selected it simply because I had read it is one heck of a drive. From the perfectly situated city of Queenstown, New Zealand, fronting the shore of Lake Wakatipu and with one of the best aerial tramways in the world, the Glenorchy-Queenstown Road meanders along the lake for nearly 29 miles of astounding scenery to the Tolkein-sounding town of Glenorchy. The lightly traveled two-lane road (with a one-lane bridge along the way) features plenty of opportunities to pull over, emerge from your car, and gaze at the often snow-topped peaks of four different mountain ranges (the Richardson, Humboldt, and Eyre mountains, and the Remarkables), the deep blue of the mysterious lake (urban legend holds that the tide originates not from gravitational pulls but from the still-beating heart of the dead giant beneath the surface) and the pink, purple, and yellow lupines that grow wild along the shoulders. This is a road that you don’t want to end, and certainly one that invites you to keep your foot light on the gas pedal in order to absorb the grandeur all around you — some of the most spectacular on the planet. Once you’ve reached the end, you can shoot a nine-hole round of golf, go horseback riding, or just grab a cup of delicious hot chocolate from the Glenorchy Café and enjoy the views from the Glenorchy Waterfront Reserve while you ruminate about the pleasures of the drive back. 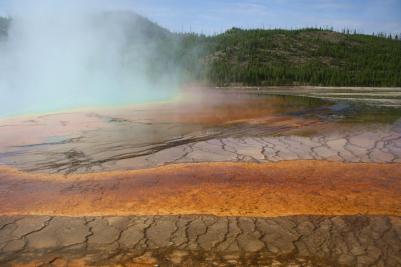 No matter where you drive in Yellowstone National Park, one of the top five things to see in Wyoming, you’ll be rewarded with astonishing scenery, and if you go before or after the summer tourist onslaught, with very little traffic (except when a major wildlife spotting causes everyone to stop and happily gape at some magnificent creatures). Five roads leading into the park from different directions all eventually merge with the figure-eight loop at the park’s center. Choosing which ones to drive is a conundrum, but, fortunately, I had quite a few days here to explore them all. My favorite is the 34-mile stretch from Madison to West Thumb, on the western side of the park. Keeping an eye out for elk, birds of prey, buffalo, and fly fishermen in waders, I drove over rivers and creeks alongside impressive mountains and vast valleys. Bizarre geothermal features litter Biscuit Basin, and surreal colors in the water elements of Midway Geyser Basin left me wondering why Crayola hasn’t capitalized on dozens of new shades and hues that are found here. The park’s most famous attraction, Old Faithful, and the iconic Old Faithful Inn, are situated along this road, too, and provide a popular place to stretch your legs for a bit. After crossing the Continental Divide twice, I ended up at West Thumb Geyser Basin, where steaming pools and springs of green and blue water — so perfectly clear that you can gaze into them at the truly weird geologic formations in their depths — made me question if I was still on earth. 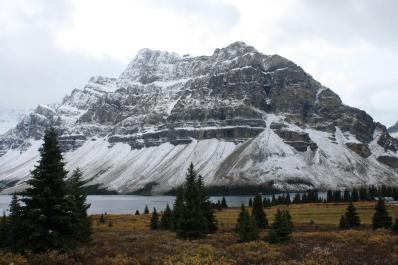 For about 144 miles, the Icefields Parkway runs through what is unarguably the most scenic part of Canada, twisting through both Banff and Jasper national parks. Although easily accomplished in a few hours, the drive really demands that you spend the entire day on this stretch, and that’s exactly what I did. Heading south from the town of Jasper right after breakfast, I crawled past soaring Rocky Mountains, the wending Athabasca River, glaciers, and lakes, captivated by the beautifully wild, and wildly beautiful, undisturbed landscape. There’s plenty to see when you pull over, too: Athabasca Falls, Sunwapta Falls, a hike to the otherworldly blue color of Peyto Lake, the rugged Mount Fryatt, and the icefields themselves. By the time I arrived in the lovely town of Banff, in time for a late dinner, I realized I had just experienced the best that Canada has to offer. 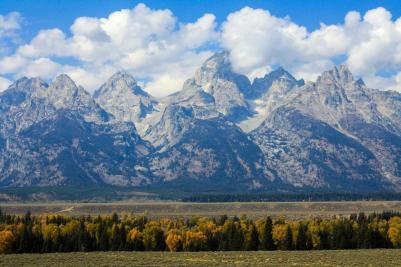 Stretching from the southeastern corner of Jackson Lake to just north of the town of Jackson, the 21-mile Teton Park Road follows the base of the jagged Teton Range through Grand Teton National Park. Rocky mountains dramatically rise up from the valley floor, their craggy peaks topped with snow and playing hide-and-seek with passing banks of clouds. Picnic areas along the way afford plenty of opportunities to enjoy a meal or a snack amid the grandeur all around you, and easily accessible trailheads enticed me to take a break from my car and do some incomparable hiking, one of my top five things to do in Wyoming, particularly to Taggart Lake and Jenny Lake. Multiple turnouts provide glorious views, especially of Teton Glacier, Cascade Canyon, and Mount Moran, where amateur and professional photographers gather to capture some of the best scenery in the United States. Some unexpected sites pop up, too, such as the log Chapel of the Sacred Heart, where passing mule deer may keep you company for a bit, and Menors Ferry Historic District, with its remnants of the homesteading and pioneer life in Jackson Hole, including cabins, barns, a chapel, and a still-operating general store. 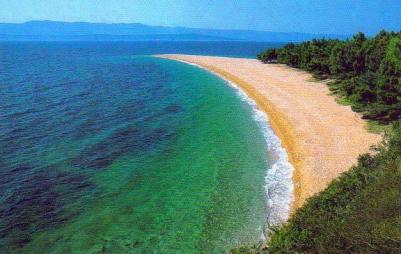 From the second I boarded a bus headed north from the airport outside of Dubrovnik, Croatia, I was captivated by the road that hugs the Dalmatian Coast of the country and by the vistas it boasts. For starters, I caught my very first glimpse of Dubrovnik’s Old Town as my bus crested a hill, and it was more breathtaking and thrilling than anticipated. I instantly fell in love with it. One of the top five oranges in the world, the city’s rooftops seem to form one giant orange orb surrounded by the white defensive wall that juts into the dazzling cobalt blue of the Adriatic Sea. Farther north, the road rises and falls with the contours of the land, with views of mountains to the east and green islands, small towns, and pristine beaches to the west. After a brief border check in the little arm of Bosnia and Herzegovina that splits Croatia in two, the road continues north all the way to Zadar before eventually turning inland. I was grateful for having been a passenger on this trip — I’m sure the beguiling visual distractions would have resulted in a very damaged rental car.