Amsterdam’s mercurial early spring weather necessitated spending some time indoors, away from the tulip explosion and canal-side strolls. I had prioritized a list of churches to see, but my lineup of museums proved trickier: Nearly 80 museums clamored for my attention. There are plenty of art museums as well as house museums, where you can walk through flamboyant period rooms in iconic canal houses. Museums about topics such as sex (kitschy, yet with a variety of interesting and even enlightening exhibits), Bibles (some of these books are works of art), and cheese (the gift shop is as good as the museum) appeal to those with a very strong interest in a certain subject, or at least with a heightened curiosity. You can find a museum about a hidden church, funerals, and the country’s maritime history. With all that to choose from, I had to whittle it down a bit. The Rijksmuseum and the Anne Frank House were my top two choices, but the rest played out organically, and my selections almost exclusively proved to be highly rewarding. These are my favorites. 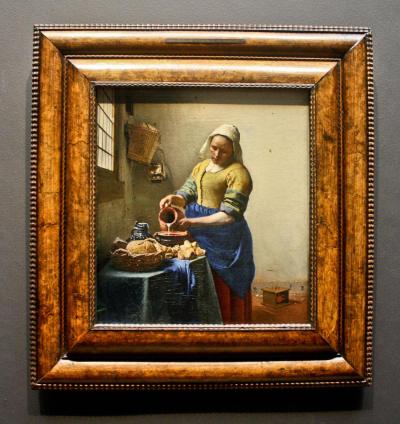 Amsterdam’s most renowned museum positively deserves that accolade. And it’s no secret — more than two million visitors come here every year. At the head of the grassy Museumplein is the continuously photographed red and white I amsterdam sculpture, where you can scramble all over the letters. Behind it rises this gorgeous building, with at least half a dozen towers, intricate brickwork, and rich decorative elements that reference Dutch art history. The museum began life in The Hague in 1800; Amsterdam didn’t receive the transfer until 1806, when the collection was housed in a series of two other buildings before arriving in this new structure in 1885. As I expected, a line had already formed before opening hours, but it moved quickly once the doors opened, and my Museum Card granted me express access. The Rijksmuseum gets packed early and pretty much stays that way all day, with the more famous paintings (e.g., Rembrandt’s The Night Watch and Vermeer’s The Milkmaid) swamped by people half a dozen rows deep. I marveled at the museum’s collection, crammed with 8,000 objects of art and history from the museum’s total collection of one million pieces dating from 1200 to today. Van Gogh’s Self Portrait is definitely a highlight, but I was also engaged by the twisted trunk and branches of the tree in Forest Scene, by Barend Cornelis Koekkoek; taken aback by the upside-down, bound, disemboweled bodies in Jan de Baen’s The Corpses of the De Witt Brothers; impressed by the realism in The Explosion of the Spanish Flagship During the Battle of Gibraltar, by Cornelis Claesz. van Wieringen; and amused by the symbolism and foolish people in Jan Havicksz. Steen’s The Drunken Couple. The art had clearly achieved its purpose, eliciting a wide range of emotions and reactions from me. Of course, superior Dutch paintings compose just a part of the museum’s inventory. Vases, tapestries, enormous dollhouses, furniture, showpiece fireplaces, gorgeous Delftware, and model ships round out the collection. Although there’s so much art to beguile you, don’t neglect to appreciate the beauty of the building itself, especially the stunning Great Hall, with gorgeous stained glass, huge murals, and mosaic tile floors. 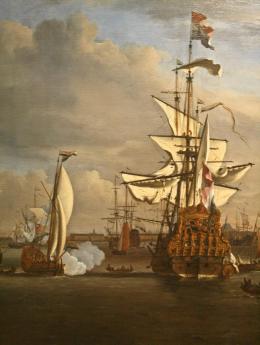 The first museum I visited in the Dutch capital was, appropriately enough, the Amsterdam Museum. I would recommend it as your initial choice, as well, because this museum provided me with an excellent backdrop and greater appreciation and understanding of everything else I would see in Amsterdam after it. Housed in a building that originally served as a cloister, and then as the old civic orphanage, the Amsterdam Museum, via its videos, interactive exhibits, and comprehensive collection of art and artifacts — books, ceramics, crafts, drawings, furniture, glass, medals, paintings, prints, and sculptures — brings the history of the city to life. You’ll learn how the city literally stays afloat (unlike slowly sinking Venice); how the Dutch Golden Age began, flourished, and ended; how the canals and canal houses came to be; and how the city lost 75 percent of its Jewish population (60,000 individuals) during the five years of Nazi occupation during World War II. You’ll also discover the meaning of the city’s symbol — three white x’s (actually St. Andrew’s Crosses) on a black stripe on a red field — that has nothing to do with the size of extra-large clothing or the easy access to sex in the Red Light District. All of that insight will heighten your comprehension of just about everything else throughout the city.

I found this branch of the famed Russian museum along the Amstel River, housed in one of the largest 17th-century buildings in the city. The classical-style Amstelhof building went up in 1681 as a retirement home for elderly women, later joined by elderly men, and served that purpose for more than 300 years, until the facility’s operators decided to build a new structure to serve the modern needs of its residents. I passed through the inner courtyard and its potted tulips on my way to the entrance of this three-story building. One of the permanent exhibits at the Hermitage Amsterdam traces the centuries-old relationship between the Netherlands and Russia. It’s the high quality of the special exhibits, however, that really bring this museum to the fore. Recent topics included Spanish masters, van Gogh, Flemish painters, the art of the Russian Orthodox Church, and the end of the Romanov dynasty. When I visited, the comprehensive and excellent exhibit on the Silk Road was filled with hundreds of objects that expertly told the story of how the route from China to Constantinople, more than 5,000 miles long, connected civilizations and cultures across the continents. Be sure to check out the other permanent exhibit, as well, to discover more about the Amstelhof itself, including its old kitchen with cobblestone floors and round brick ovens so tall that step stools were often required for the shorter cooks to get a good grip on the pots and pans in which food for 400 seniors was being prepared.

One of the city’s top house museums was originally built for an Amsterdam mayor, around 1685. Eventually, bon vivant Abraham Willet and his wife, Louisa Willet-Holthuysen, moved in and lived there until their deaths, in 1888 and 1895, respectively. Louisa bequeathed the building and its contents to the city, on the condition that it became a museum. One year after her death, the Museum Willet-Holthuysen opened. Willet lived the good life, frequently attending the theater and dining out with artistic friends. Louisa used to go shopping with her lady-companion and walk her dogs, and at night she accompanied her husband to concerts, plays, and the opera. Throughout their marriage, they collected an impressive amount of high-quality and varied art — paintings, ceramics, glassware, furniture, sculpture, etc. — whereas most Dutch collectors in the 19th century focused only on drawings, prints, and paintings. I entered on the ground floor and looked into the homey kitchen. Messy chores were restricted to a scullery; in finer weather, the staff would cut vegetables on the patio. The hall led to a room that displayed Louisa’s silver miniatures collection (everything from a tiny teapot to little dominoes) and then out to the large and pleasant French Classical–style garden. Among the plants and shrubs, the deep garden contains red-and-white gravel in fancy design, five sculptures, and an 18th-century sundial. Back inside, I climbed the fine, central staircase, with its rich carpet, marble statues, and gilded wrought-iron banisters, to the elegant entrance hall. On this floor, I checked out the Ladies’ Salon, where Louisa received guests; the Ballroom, where the couple hosted concerts, literary events, and gala balls amid sumptuous Louis XVI–style furniture; the Gentlemen’s Parlor, where Willet held “art viewings”; the Dining Room, with a table set with some of the pieces of the 275-piece Meissen porcelain service; and the Conservatory, where Louisa would have her tea amid its light-green woodwork, overlooking the garden. Another floor up brought me to the bedroom (no running water at the time meant servants had to lug up water from the basement for bathing) and the Collector’s Room, a dark octagonal room with stained-glass windows and red-velvet wall coverings with a pressed sunflower motif that reappeared in the upholstery of the antique chairs, where Willet displayed his collection of objects, statues, and coins.

#5 Museum of the Tropics (Tropenmuseum)

One of the largest museums in Amsterdam, the Museum of the Tropics (Tropenmuseum) doesn’t even break the top 25 in terms of visitor numbers — and that’s great news for you, especially if you’ve just come from the swamped Rijksmuseum. This anthropological museum, established in 1864, accommodates multiple permanent exhibitions inside a striking building that took 11 years to build and was completed in 1926. With one uniform color employed for the bricks and one lighter natural stone for the finishes and rich decorations, the neo-renaissance structure features towers, clocks, gables, dormers, and statues all around. It’s all very European — until you step inside, and then it’s anything but. The old Koloniaal Museum had been established in Haarlem in 1864 to exhibit Dutch overseas possessions and the inhabitants of these foreign lands, such as Indonesia and small strips and chunks of Africa, India, and South America. The museum evolved, moving to this building upon its completion and adding information on the economy, manners, and customs of the inhabitants of the Netherlands’ colonies and possessions, followed by the addition of photographs and then the expansion of exhibits on undeveloped colonial states, whether Dutch or not, in Africa, Asia, and South America. Today, the museum houses 175,000 objects, 155,000 photographs, and 10,000 miscellaneous documents, drawings, and paintings that focus on the non-white world: Asia, the Caribbean, Latin America, North Africa, and sub-Saharan Africa. It’s a wonderful immersion into these cultures. From the central atrium with the grand staircase, I took a mini-tour of this world, from African fertility gods and pick combs, to Mexican Day of the Dead skulls and skeletons. I walked through Middle Eastern arches with painstaking details, smelled the spices of the Far East, looked at Persian fountains and beautiful rolls of silk from China, and stood under Central Asian domes. If ever you feel overwhelmed by all the bicycles, stroopwafel, canal cruises, and rambunctious stag and hen parties, this is the perfect place to see something un-Dutch.