Like a modified siren — beautiful, but not so dangerous — Prešeren Square beckoned me at some point during every day that I spent in Ljubljana. What was it about this open, pedestrian-only space, which doesn’t even come close to the world’s 100 largest squares but was declared a cultural monument of national significance in 1991, that kept luring me back, either during the day, when activity swirled around its delightful attractions, or at night, when romantic lighting enticed me to stay there longer than I anticipated?

For starters, there’s its misnomer. Prešeren Square is not a square at all, but rather a circle, with granite-block pavement and lines of marble from Macedonia extending from its core. It traces its origins to the 17th century, but it wasn’t until a devastating earthquake in 1895 that the design was altered to a hub for four streets that radiate off it. 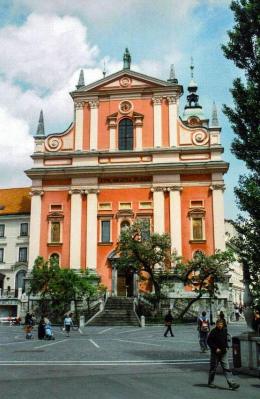 One of the most beautiful churches in Ljubljana, the Franciscan Church of the Annunciation keeps Prešeren Square colorful.

After World War I, the original bridge, from 1842, that led directly into the square could no longer serve the increasing traffic. In 1932, architect Jože Plečnik — Ljubljana’s answer to London’s Christopher Wren — added a footbridge on either side of the original span. Instead of running them parallel, he attached them at subtle angles, forming a funnel shape. He added a few hundred balusters and a couple of staircases that lead down to the lower arcaded river terrace, transforming something utilitarian into something beautiful. As a result of Plečnik’s thoughtful attention, the Triple Bridge rates among the top five bridges in the world.

Standing on the bridge, I enjoyed a lovely view of the Ljublanica River that gently flows beneath it, continually shifting colors between green, gray, and blue, and carrying with it an occasional kayaker, crew team, or glass-enclosed sightseeing boat. Looking south, I admired the view of one of the green mountains protecting the city, which you can ascend via foot or funicular to visit Ljubljana Castle, now perfectly framed between and high above the impressive buildings flanking Stritarjeva Street.

By turning around and facing north, I was able to appreciate the full scope of the square’s assemblage of outstanding architecture, including the neo-Renaissance Central Pharmacy building (from 1897); the Hauptmann House, a survivor of the 1895 earthquake, topped with wonderful geometric patterns of green, blue, and red ceramic tiles under a deep eave; the Art Nouveau Centromerkur (1903), the city’s first department store, recently renovated and still serving as a shopping destination; and the oldest building on the square, the Franciscan Church of the Annunciation, a pink, baroque house of worship from 1660. 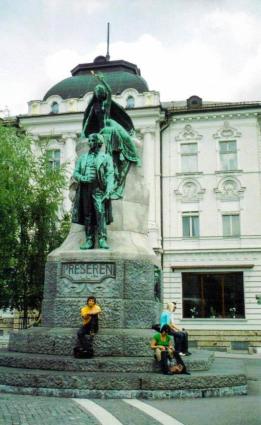 One of the best ways to immerse yourself in the square’s splendor is to relax at a table at one of the outdoor cafés fringing off the square. However, to really understand what this place means to Slovenes, pick up a snack from one of the pushcart vendors (a banana ice cream cone is a fine choice) and sit on the deep stairs at the base of the statue of France Prešeren, Slovenia’s national poet.

Prešeren achieved his greatest fame in the 1830s, and his reputation lives on today, not only in the lending of his name and legacy to the square, but also to the Slovene two-euro coin, the name of the highest Slovene prize of artistic achievements (the Prešeren Award), the country’s national anthem (the lyrics of which are taken from one of his poems), and Prešeren Day, a public holiday celebrated since 1945 on February 8, the poet’s birthday.

Prešeren died at age 48 in 1849 of cirrhosis of the liver, but one could speculate that a broken heart contributed to his demise. Ever since he first saw Julija Primic in her bedroom window from the courtyard of a building where he and his friends would congregate, he was in love. But that love went unrequited — Julija was from a wealthy family and Prešeren was not, so even if she did fancy him, societal and class conventions would have forbidden a relationship. Prešeren continued to pine for her, even after she married someone else and he had three children with another woman, and she became the source of his most inspired, intimate, beautiful, and recognized poems.

Prešeren’s unattainable love, Julija Primic, stares at him from across the square.

The bronze statue of Prešeren, unveiled in 1905 and now turned a verdigris green, stands on a pedestal, shadowed by a large winged muse of poetry holding a laurel sprig above his head. Prešeren looks across the square, facing the same building where he first laid eyes on Julija. Above the door to that building sits a statue of Julija, made to appear as if she’s looking out her bedroom window. To this day, Prešeren is doomed to gaze longingly at his beloved from afar, unattainable for eternity.