My fantastic hotel, Hotel Phoenicia, was located in Floriana, just outside the gates of the Maltese capital of Valletta. Every day, no matter where I went in the small and manageable country, I would end up returning to my hotel and walking two minutes into another city, and a truly remarkable one at that. Valletta is like a tremendously compact version of all of Europe, jam-packed with interesting sites, gorgeous Mediterranean views, steep staircases to challenge your cardio fitness, gardens, bastions and forts, eye-catching green balconies, and a plethora of outstanding restaurants, such as Ambrosia, Legligin Wine Bar, and Palazzo Preca. It also has an unexpectedly high number of gorgeous churches for such a tiny city. These are my favorites. 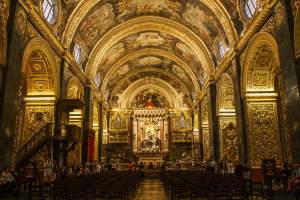 The city’s main attraction, St. John’s Co-Cathedral, requires a €10 fee to enter (unless you’re attending a service). Although slightly irksome, I immediately forgot about it the second I entered. Built between 1572 and 1577 by a prominent Maltese architect, the church received its “co” status in 1816 when it was elevated to the same status as that of St. Paul’s Cathedral in Mdina, the seat of the Roman Catholic Archdiocese of Malta. The co-cathedral features a fairly simple exterior in the Mannerist style. Two large bell towers anchor the church, with Doric columns flanking the main doorway and supporting an open balcony, and with a couple of empty niches. An eight-point Maltese cross tops the pediment above. If it hints at a fortress more than a church, that’s probably a good thing — it withstood a devastating onslaught during World War II when Malta became the most heavily bombed place on earth. Inside, it’s a completely different story. Remodeled in the 1660s, today it’s one of the finest examples of high Baroque architecture in Europe. Maltese limestone was used to construct the church, perfect for the intricate carving found throughout. The striking interior positively glows from all the gilt. The surfaces of the walls, arches, and ornamental features are encrusted with over-the-top gold frillery. Spiral columns, vivid paintings, marble of all colors, and ornate sculptures surround you. A marble group depicting the baptism of Christ adorns the main altar. The wide nave is flanked by nine side chapels—one dedicated to Our Lady of Philermos and the rest to the patron saints of the eight langues (divisions) of the Order of the Knights of the Hospital of St. John, such as saints George, Sebastian, and James — and each one richly ornamented, half of them with works by Italian artist Mattia Preti.

Amid all this spectacle, two of the church’s best assets completely beguiled me. One is the church’s most important piece of art: Caravaggio’s The Beheading of Saint John the Baptist, from 1608. It’s his largest piece (12’ x 17’), and the only one he signed (in the blood spilling from John’s slit throat). A stunning example of the chiaroscuro style, it’s truly a masterpiece to behold, and it’s the one that catapulted Caravaggio onto my list of favorite artists.

Although it’s instinctive to look up at the barrel ceiling over the nave, with its ribs separating frescoes of scenes from the life of St. John the Baptist (also by Preti), the second highlight is underfoot. The entire floor is a quiltwork of memento mori. Highly polished and richly decorated with skeletons and skulls, clocks and hourglasses, in-laid marble tomb slabs cover the floor. Below them are the remains of more than 400 Knights Hospitaller. The Knights, a medieval Catholic military order begun in Jerusalem, bounced around the Mediterranean until they received permission from the King of Spain to settle in Malta (in return for sending one Maltese falcon to the king every year on All Saints’ Day). In 1565, the Ottoman Empire invaded with a force of 40,000 men. Impossibly outnumbered (with only 8,000 soldiers plus 700 knights), Malta pulled off a miracle, dealing the Ottomans a significant defeat, albeit at a high price — nearly half the knights died in battle. They’re now buried here, with the more important knights placed closer to the altar. But, ladies, be careful what you wear when you visit here: Stiletto heels are not permitted, in order to protect the striking artwork under you.

Administered by the Dominican Order, the current Basilica of St. Dominic replaced a previous church on the same spot that was becoming unsafe after 200 years of earthquakes and storms. After being demolished, a temporary chapel was built for the throngs of sailors who came to thank the Mother of God for seeing their safe return to Valletta after long and sometimes precarious voyages on the sea. Completed in 1815, the new church was thus dedicated to Our Lady of Safe Haven, and it received a promotion to minor basilica the following year. Two bell towers with balconets and oval windows flank the slightly concave entrance. Inside, plenty of gilding on the ceiling, the organ case and loft, and in the capitals of the Corinthian columns add to its richness. Dominican friars in black cappas and white habits are painted into the pendentives of one of the domes. The elaborate altarpiece is magnificent, particularly since the wooden altar candleholders that were stolen were returned — after the not-so-bright thief tried to sell them on a Maltese website. Above the altar, a painting of people beseeching Mary on a distressed ship in turbulent waters reminds you of the perils of the sea that surrounds this country. 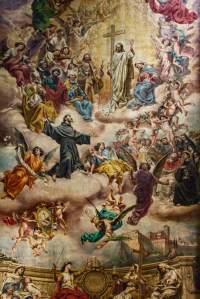 The original church, completed in 1607, didn’t last a century. Structural defects necessitated its demolition. At the corner of the new building, completed in 1681, a statue of St. Francis, holding a simple cross and wearing a basic robe with rosary beads, reminds you to whom the church is dedicated; the coat of arms over the entrance reminds you who was responsible for the reconstruction — Gregorio Carafa, the 61st Grand Master of the Order of Saint John from 1680 to 1690. Enlarged in the 1920s to include a dome, the building features a single bell tower and highly intricate grillwork on the upper-story windows. Inside, Carafa gets his due (even though his tomb is located elsewhere, in St. John’s Co-Cathedral). As in St. John’s, the artist Mattia Preti contributed a great deal of work here, including the masterful painting-within-a-painting altarpiece that depicts St. Gregory Thaumaturgus presenting a portrait of Carafa to the Virgin Mary. Preti also indulged in a bit of self-importance in his painting of St. Luke (patron saint of artists) drawing St. Mary and the Child, including his own coat of arms and the Latin interpretation of his name. Scenes from St. Francis’ life are depicted in each of the eight panels of the dome. The colorful painting of St. Francis’ ascension into heaven, with arms wide open and riding a cloud above the Assisi skyline, is particularly striking, with the saint making his way between two rows of angels and other saints to Mary and a friendly Jesus welcoming him with a wave of his hand. 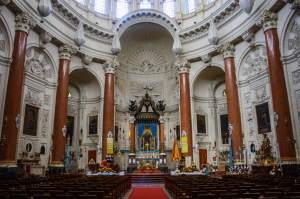 It looks old. It’s not. The original church here was completed in 1570, dedicated to the Annunciation. It was later given to the Carmelites, who shifted its patronage to Our Lady of Mount Carmel. A redesigned façade was completed in 1852, and in 1895 it was elevated to a minor basilica. Then World War II came along. Serious damage necessitated a rebuild, which started in 1958. The new church wasn’t completed until 1981, but you wouldn’t imagine it from the outside. A white statue of Our Lady in a niche stands out against the rest of the beige Maltese stone of the façade. Its Corinthian pilasters, cornice and pediment with dentils, and shallow balconies all suggest a much earlier construction. Inside the Roman Catholic church, however, things look a little newer, although hardly modern, and it achieves a most pleasing combination of the old Baroque with more simple decoration. For instance, the white dome, with a windowed drum and lantern, rises nearly 138’ feet (added to outdo the tall steeple of the neighboring Anglican cathedral in a bit of religious rivalry) and is completely devoid of adornment. In contrast, red marble columns separate shallow chapels with impressive stuccowork. And the baldachin in the sanctuary and the ornate silver candlestick holders and altar fronts are terrific throwbacks to a much more ostentatious era.

Tucked into one of Valletta’s characteristically narrow and steep streets, one of the city’s oldest churches honors the spiritual father of the Maltese. In Malta’s long history of people who have washed up on its shores, the most famous has to be St. Paul the Apostle. On his way back to Rome for his trial, Paul was shipwrecked here. He remained for three months, curing the ill, including the father of Rome’s main ruler on the island, who, grateful for his father’s recovery, converted to Christianity and became the first bishop of Malta. Fast forward about a millennium and a half, and the Roman Catholic Collegiate Parish Church of St. Paul’s Shipwreck came into existence in 1582, only to be replaced by the current church in the 1680, with a rebuilt façade completed in 1885 that features partially fluted Corinthian columns, two bell towers, and handsome statues and sculpting on the upper half. I stepped inside and was greeted by a marble angel holding a substantial seashell filled with holy water and wearing a garment that, oddly, exposes one nipple. The nave is flanked by two side aisles, each of which features five small chapels, and each of those has a dome. Four scenes of Paul in action adorn the central dome, but the most dramatic painting is a fresco depicting his shipwreck, with fellow passengers panicking, waves cresting, winds blowing, sails shredding, and Paul calmly trying to control the chaos. A wooden statue of St. Paul, carved in the late 1650s by the brother of the dome’s designer, is still paraded through the streets of Valletta every year on February 10, the Feast Day of St. Paul’s Shipwreck. But two more original pieces that predate the church itself make it particularly attractive to fans of Paul and to religious pilgrims: part of the pillar on which he was beheaded in Rome, and the relic of his right wrist bone, on display behind glass in an exposed incision of a golden forearm and hand.

Have you been here? Have I inspired you go to? Let me know!