A swirling bark makes this tree appear like a Midwestern twister.

From my hotel, I crossed the lazy Avon River and entered the Christchurch Botanic Gardens (or, in the native Māori language, Te Mara Huaota o Waipapa, the “Botanical Gardens of Waipapa,” named for the area where the gardens are located). I was nearing the end of nearly four weeks in New Zealand, motoring on the left all around North Island and South Island, including one of the world’s most beautiful drives, astounded by so much jaw-dropping scenery crammed into one nation. Christchurch was my terminal city, and after depositing my rental car, it was time to stretch my legs to see what the Kiwis could do with seeds, saplings, shovels, and spades.

Botanic gardens are usually all about the flowers for me, but at Christchurch Botanic Gardens, one of the top five botanic gardens in the world, trees rule. That shouldn’t be a surprise, given that the gardens began in 1863 with the planting of an English oak tree to commemorate the marriage of Prince Albert and Princess Alexandra of Denmark that same year. Since then, the gardens have grown to encompass a 75-acre tongue of land caressed on three sides by the winding Avon River.

The gardens’ collection of majestic and curious trees was eye-opening. Species I had never seen before invite in-depth exploration as well as countless shady spots on well-trimmed lawns to relax and enjoy a picnic of locally grown apples and creamy New Zealand cheese, perhaps on the popular Archery Lawn, framed by cork oak and giant sequoia trees. Monkey puzzle trees, royal purple beech trees, alpine ash, Lawson and Monterey cypresses, keaki, needle-leaved tōtara, and silver peppermint are just a few of at least 45 different types of trees to discover. Trees with trunks of twisting bark look like wood tornadoes halted in mid-rotation. Trees with naked, curled branches resting on the grass resemble elongated limbs, waiting to snatch you up as you pass by, like those in the scarier scenes of The Wizard of Oz or Santa Claus Is Coming to Town. Beswick’s Walk is particularly romantic, especially in autumn, when golden-yellow leaves fall from the bordering linden trees and blanket the walk. I was utterly charmed by all of them, and it altered the way I looked at these leafy giants: no longer as background to the more colorful plants in a botanic garden, but as an essential element just as intriguing.

Elongated limbs wait to embrace you.

As for the other plants, plenty of specimens from six continents (sorry, Antarctica) will thrill your senses, including rhododendrons, kōwhais, and gorgeous calla lilies. The rose receives special treatment in two separate gardens. The Central Rose Garden, established in 1909 as the largest and finest in all of Australasia, boasts 104 beds of climbing, standard, and Hybrid Tea modern garden roses, while the Heritage Rose Garden displays roses established before 1867, as opposed to newer cultivars. Both come alive with roses in seductive shades of puce, pink, peach, persimmon, and pineapple, and they added their perfumed aroma to the already fresh air I was breathing.

Even more intriguing scents rise from the Herb Garden, where plants of culinary and medicinal value will make you start contemplating new dinners or thinking about restocking your medicine cabinet with a different type of pharmaceutical.

New Zealand gets its own gardens with a trio dedicated to local flora. Wandering through the New Zealand Gardens, New Zealand Icon Garden, and Cockayne Memorial Garden, I was treated to a condensed version of everything I had seen while driving around the country for 2,100 miles, including kahikatea trees and the iconic silver fern (seen not only in nature, but in the uniforms of the country’s national rugby team and boldly painted on the bodies of Air New Zealand planes).

Wonderful calla lilies are just one of many varieties of flower.

When gravel and sand were removed from one area of the garden in the early 1900s to construct paths around Christchurch, the pits left behind were filled with water to create ponds. Today, the Water Garden features wonderful water lilies on the pond surfaces, and marigolds and bearded irises add splashes of color all around.

A conservatory complex houses collections of tropical plants, begonias, impatiens, cacti and succulents, bromeliads, orchids, and alpine plants. Under the path I was strolling along in the Fern House, a gentle stream courses through the conservatory, providing the perfect environment for humidity-seeking ferns. In the Gilpin House, carnivorous plants continued to amaze me as one of nature’s freakiest creations. 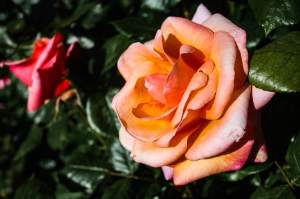 Strolling around the garden will undoubtedly help you decompress (although, after 24 days in New Zealand, I was already pretty relaxed). You can head to the group of conifers that include fir, juniper, and spruce trees, or stand in the middle of a circle of towering pine trees that are more than 100 years old and surrender ordinary thoughts to flights of fancy, perhaps recreating some sort of a druid ceremony in your mind.

Three bridges that cross the Avon River add a touch of pastoral tranquility to further your newfound serenity. They also lead to some of the gardens’ artwork. A sundial in the Central Rose Garden clad in bluestone with a polished ebony granite dial plate and brass dial provides an orientation for major cities around the world as well as New Zealand Standard Time. Another sundial — an Oamaru stone cairn with a slate dial and a brass shadow marker — was gifted to the gardens more than a century ago. Stone carvings around a small spring incorporate Māori and Celtic flourishes to portray a respect for water and its importance as both a place of pilgrimage and a source of life. In the Townend House, half a dozen cherubs, carved from a single block of marble, drink and play musical instruments. You can even make your own art at a monumental stone sculpture in the Azalea Magnolia Garden — a windowless frame through which you can compose a scene of the gardens in your own unique photograph. One of my favorites is the bronze drinking fountain designed to mirror the form of a duck as it begins to take flight, or rather as it’s coming in for a landing along the Avon River. And a little garden gnome named Henry greets you at the entrance to the Children’s Playground, wearing a sash that bears an inscription that best describes the gardens’, if not the entire country’s, would-be motto: “Guarding naturally over mother earth.”

Rock and Heather Gardens display landscaping at its best.

The Bandsmen’s Memorial Rotunda adds a touch of poignant respect to the gardens. Erected in 1926 to commemorate bandsmen who died during World War I (at the time, bandsmen were highly valued by the military — performing at burials, boosting morale by entertaining troops during downtime, leading marches, and doubling as stretcher bearers, often under heavy fire), this roofed gazebo features six Doric columns, topped with lion-head reliefs, on a base ringed by a wrought-iron balustrade. The memorial overlooks Woodland Garden. Hundreds of cheery daffodils circle around it in the spring; during the entire year, it’s surrounded by Turkish oak trees — particularly relevant and thoughtful, given that more than 7,000 New Zealanders were killed or wounded at Gallipoli, Turkey, during that famously disastrous campaign.

Although a section loosely called “the Zoo” came to an end in 1930, when it was replaced by the Daffodil Woodland (and its residents, including wallabies, kangaroos, a lemur, angora goats, and an emu named Jack, were relocated), there’s plenty of animal life here, too, amid all the flora and art — particularly birds. Keep an eye (and an ear) out for up to 40 species of introduced and native wetland and bush-dwelling birds that find refuge on the grounds, including the native pigeon, a sturdy bird with a green upper body, mauve back, and white breast, and with a thumping wingbeat you may hear before you see it. You may also very well hear the sweet call of the olive-green bellbird or the high-pitched gray warbler. While I was moseying around, I made friends with mallard and native gray ducks, a male blackbird with a bright orange beak, and a female paradise shelduck.

The Peacock Fountain is a chipper end to your day in the gardens.

When you exit the garden, blissfully filled with sensory overloads, make sure to greet another amicable avian: the quartet of herons that stand at attention around the wonderfully playful Peacock Fountain. Don’t expect to see peacocks here; its name derives from the name of the man who, upon his bequest, was responsible for having the foundation imported from England and installed in the gardens in 1911, the Honorable John Peacock. The ornate cast-iron fountain of Edwardian design in a large circular pool stirred up more controversy than one would imagine a fountain capable of, resulting in everything from changing its location to storing it away for years to changing its color palette. Regardless of the mixed reviews and criticisms it received from the very beginning (likened to “a refugee from a confectioner’s nightmare” and “the gaudy decorations used by travelling showmen to embellish their merry-go-rounds”), I found the restored, re-cast, and re-painted fountain charming: a 25’-tall fountain decorated with herons, water reeds, and dolphins heavily scaled and a bit dragon-like in appearance. Although one critic said “the new color coding of the fountain has a closer cultural relationship to a nouveau riche garden in Bangkok” (which, actually, isn’t all that far off the mark), I still found it a truly rewarding way to end a day in this spectacular urban oasis.