During a high school trip to Switzerland, in between the odd parade in Zurich, tramways to Alpine summits, and wonderful arcades of Bern, I took a seat on the longest bench in the world. At 413 feet long, the bench, built in 1767, runs along the perimeter of La Treille Park in Geneva. It’s a simple bench, made of 180 wooden boards painted green, and boasts a lovely view. That was probably the first time I made a deliberate mental note about benches, a note that has resurfaced ever since whenever I seek a place to rest and people-watch for a few moments. But some of those benches themselves have become the things worth watching. These are my favorites.

From my fantastic hotel in Warsaw, Hotel Bellotto, I was able to walk just about anywhere I wanted to go, from the National Museum, to the Royal Route up to the Royal Palace, to dinner at Restauracja Kultura. Some of those walks were rather long, especially on unseasonably hot and humid autumn days, so finding a bench every now and then provided a welcome respite. But some of those benches transcended their simple purpose and offered education and entertainment. Scattered around the city, 15 unobtrusive benches of granite and black polished stone are simple flat surfaces, with no backs or arms. Closer inspection, however, reveals some delightful surprises. They constitute a series called Chopin’s Warsaw, in honor of Poland’s most famous composer. The surface of each bench offers a map of its location and vicinity — streets where Chopin used to walk while he was living in the city. A paragraph, in Polish and English, provides an explanation of the importance of the site in relation to Chopin. When scanned, a QR code on the bench grants access to facts and figures about Chopin as well as photographs and melodies. The best part is the little button. Push it and you’ll be rewarded with a 30-second snippet of one of his most famous ballads, etudes, nocturnes, waltzes, and other compositions. 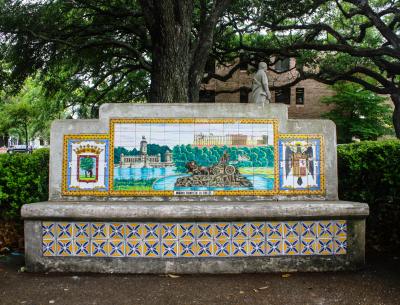 Situated just a block from the Cathedral Basilica of the Immaculate Conception, one of the most beautiful buildings in Alabama, Spanish Plaza provides a pleasant green oasis in the heart of Mobile. Amid the grass, trees, lampposts, fountain, arches, and statues in the plaza’s one square block, I found the most inviting benches. The base of each of 12 concrete benches features a long panel of ceramic tiles in an abstract design. The back of each bench, also in colorful ceramic tile, portrays a historic or famous vista of a different Spanish city, with landmark monuments, flanked by coats of arms and sometimes accompanied by local products and a greeting in English and Spanish. You’ll find a Madrid scene with the Fountain of the Cibeles, a Barcelona scene with La Sagrada Familia church, a sailboat passing through Valencia with its famous orange trees, and a port scene of Malaga, among others. Not only will these benches impress you with their beauty, but they will also inspire you to book a trip to Spain — and the tiles will keep you cool on a hot Alabama day. 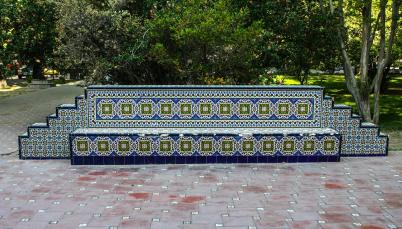 In the heart of Mendoza, five wonderful plazas gave me ample opportunity to enjoy the outdoor scene of this engaging city, especially after returning to the city from a day of wine tasting. The largest plaza, Plaza Independencia, is a hub of activity, from outdoor markets to the modern art museum. Each of the four satellite plazas are located equidistantly one square block from one of the corners of Plaza Independencia, like the pips on a die that rolled up on five. Each honors a country or figure critical to Mendoza’s development: Chile, Italy, Spain, and José de San Martín. Of these, the gorgeous Plaza España was my favorite. Throughout this plaza, amid its luxuriant trees and shrubs, an artistic reflection of the relationship between Argentina and Spain includes fountains, small glazed Majolica tiles with simple motifs scattered among the paving stones on the ground, a mural depicting the foundation of Mendoza by the Spaniards, a marble monument, and, of courses, delightful benches. Swathed in brilliantly glossy Andalusian tiles of green, blue, yellow, orange, black, red, and white, these benches come in different shapes and sizes. Long, straight benches have two levels for seating, the upper tier accessed by tiled staircases of half a dozen steps on each side. Tiled planters anchor L-shaped benches. More elaborate benches feature planters as well as backs of different heights. No matter which you choose to rest on, these benches will give you the prettiest backdrop imaginable.

The 2.6-mile Riverwalk that runs along the Garrison Channel and Hillsborough River through Tampa is chock full of attractions, starting just outside the Florida Aquarium and running past, for example, the Tampa Bay History Center, Tampa Convention Center, Florida Museum of Photographic Arts, and the Tampa Museum of Art. While you’re strolling along this pedestrian trail, taking in these sites, as well as views of the city’s new developments and low bridges, you’ll have plenty of seating opportunities to give your feet a break. And the best place to do that is in the section that runs through Cotanchobee Fort Brooke Park. Here, a long, simple concrete bench curves its way along the waterfront and runs mostly without a seatback. Every so often, however, a small arced seatback rises up in a splash of cheerful color. The ceramic reliefs embedded into the backs were created by a husband-and-wife team of fine artists. The imagery focuses on the historic relevance of the site, Tampa’s industry, and the downtown area. Inspired by old maps, photographs, and textile patterns, the images feature, for instance, palm trees, sunshine, and blue water; the wonderful domes of the old Tampa Bay Hotel; the nearby Sunshine Skyway Bridge; cypress trees with impressive roots; a seabird perched on a sandy shore observing blue waves; a map of the Caribbean with immigration routes to Tampa; and a host of abstract designs. It’s a wonderful place to stop for a snack and to watch the boats and occasional manatee traverse the waters in front of you. From my hotel in downtown Providence, I boarded a bus for the three-mile ride north to Swan Point Cemetery. The city’s most prominent cemetery, thanks to the large number of well-known citizens buried here (including more governors, senators, and congressmen than any other cemetery in Rhode Island), was added to the National Register of Historic Places in 1977 in recognition of both its historical importance and beauty of its setting. I ambled around the grounds, with its fine funerary art, sculptures, mausoleums, and sarcophagi; views of the Seekonk River; wooden gazebo at the top of a stone staircase; and, of course, the swan vane atop the steeple of the main administration building — not to mention a lone wild turkey strutting about. In between finding the graves of bizarre fiction author H.P. Lovecraft and Olympian and U.S. figure skating champion Dudley Shaw Richards, I stumbled upon a highly unusual bench. The seat is just a polished granite slab, but the rest of it is spectacular. Two carved angel wings, joined at the center, open up, forming the back and sides before curving down to the ground to serve as the legs. Embedded into the center of the wings, a black panel bears a single engraved name — Lillian. A collection of small rocks on the left had been offered as a remembrance. I don’t know who Lillian was, but I think I would have liked her and spending time visiting her at this most peaceful seat.