More than any other city in the world, Rome has tremendous amore for fountains. Over 2,000 fountains can be found throughout the capital of Italy, cooling citizens and visitors during the hot summer months, and always providing a romantic backdrop for your experiences here. And that’s not a recent development. Even in the year 98, Rome already had 39 monumental fountains extolling the grandeur of the Roman Empire and 591 public basins for drinking and cleaning. When the empire fell in the 400s, the aqueducts that fed the fountains stopped working, either from disrepair or enemy destruction, and Rome’s ensuing dry spell lasted about a millennium until a renewal effort started rehydrating them. Today, you can’t walk very far before you start to hear the welcoming sound of gurgling and tumbling water. These are my favorite fountains.

As a teenager on a high school trip many years ago, I threw some lire coins into the Trevi Fountain, buying into the long-standing legend that if I did so, I would return to Rome one day. It took a few decades, but the legend held, and I found myself back in the city, older and wiser and with a greater appreciation for the city’s history, culture, importance, and enduring allure. I also found that Rome’s most famous fountain is also its most crowded. The Italian capital is the fourth most-visited city in the world, and all of those people seemed to be at the fountain at the same time when I approached. I had to be a little assertive and force my way through row upon row of tourists in order to view the fountain close-up, but the effort paid off. With the grand Palazzo Poli as its backdrop, the largest Baroque fountain in Rome (at 86 feet high and 161 feet wide) springs to life with multiple cascades and marble statues. The Titan god Oceanus watches over all of it from the top in his shell chariot, with Abundance on one side, spilling water from her urn, and Salubrity on the other, holding a cup from which a snake drinks. Two other Titans struggle to rein in their hippocamps, horses of the sea. All about them, water spills over travertine rocks, ledges, and fauna before tumbling into the turquoise pool, around which hundreds of tourists sit, take selfies, and add more coins to the fountain. About $3,300 is thrown into the fountain every day — money that’s used to subsidize a supermarket for Rome’s needy. Trevi was completed in 1762 and nothing about it has changed — except the coins I threw into it now, hoping to return here yet again, were euro.

Built over the open space of the former first-century Stadium of Domitian, where the ancient Romans used to go to watch athletic competitions, Piazza Navona still draws crowds today, for different reasons, but just as plentiful. At the center of it all stands the Fountain of the Four Rivers, designed by Bernini in 1651 for Pope Innocent X, whose family palace faced the piazza. Four animated river gods sit upon travertine rocks in the middle of the basin, each representing a major river on the four continents where papal authority had spread — the Danube in Europe, Ganges in Asia, Nile in Africa, and Rio de la Plata in the Americas. Each bears unique characteristics that associate it with its geographic region. The Ganges god, for instance, holds an oar, symbolizing the navigability of the river, but also looks away from the light of the Church of Saint Agnes behind hit, in reference to the then spiritual ignorance of Catholicism in this polytheistic land. The god for the Danube, as the largest river nearest to Rome (surpassing the smaller Tiber than runs through the city), gets to touch the personal coat of arms of the Pope. The Americas god rests on a pile of coins, symbolizing the riches this new land was offering Europe, and the Nile god has his head covered, as the source of that river was still unknown at the time. Each god is also accompanied by flora and fauna native to their represented lands: The Nile gets a lion and palm tree; the Ganges, a serpent; the Rio de la Plata, an armadillo-type animal; and the Danube, a horse. A copy of an Egyptian obelisk stands on a plinth and rises nearly 115 feet from the center of the fountain, topped by a dove, a symbol of both peace and the pope. This magnetic fountain drew me here almost every evening, with a cup of phenomenal gelato in hand, to enjoy its endless show of the movement and sounds of water. 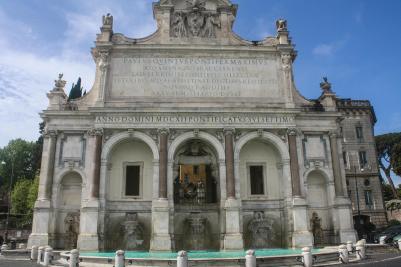 Unlike the Trevi and Four Rivers fountains, the Fountain of Paul’s Water receives few visitors, thanks to its location in Janiculum Hill, a section of Rome devoid of major attractions (but with some of the best views of central Rome’s domes and spires). In fact, I had it largely to myself, at a bend in the Via Garibaldi, across the street from one of the city’s best lookout points. This monumental fountain was built in 1612 to mark the end of the Acqua Paola aqueduct, restored by Pope Paul V Borghese (hence its name) in order to bring clean drinking water to the local residents here. Designed by, aptly enough, a man named Giovanni Fontana, the fountain employed white marble from the nearby ruins of a Roman temple. A hulking gateway of three large central arches, with a smaller one on each side and all framed by gray or red granite columns, accommodates the flow of water that spills through them into five marble basins, which then overflows into the large semicircular pool. Above the arches (look for dragons in the spandrels and human faces in the column capitals next to them), a long Latin dedication acknowledges the pope’s role, topped by the papal tiara and keys above the Borghese family coat of arms. After the fountain was completed, marble posts were added around the large basin to stop coachmen from watering their horses there. Humans weren’t so easily deterred: An ordinance had to be issued in 1707 to prevent them from bathing in it.

Although the Fountain of the Four Rivers gets the lion’s share of attention in the center of Piazza Navona, the Neptune Fountain, situated just outside the Museum of Rome and the Brazilian embassy at the northern end of the piazza, is a remarkable work of art as well (as is Fontana del Moro, or Moor Fountain, at the southern end). The fountain’s basin was designed in 1574, made from marble and local stone, and used as a washbasin for laundry and produce. But it took three centuries more for the fountain’s signature statues to make their appearance. At the center, Neptune uses his trident to fight off an attacking octopus, two of its tentacles wrapped around his muscular thighs. Surrounding the god of the sea, two sea horses seem petrified, one by the putto on its back yanking its mane, the other by the putto tugging on its bridle. Dolphins and mermaids complete the tumultuous scene.

In the middle of the small, cobblestoned Piazza Mattei, I came across the charming Turtles Fountain. Designed to bring drinking water via aqueduct to the local populace in 1588, the fountain’s original composition consisted of a vasque, or basin, atop a pedestal, from which water would spout and then pour down into the polygonal basin. Around the pedestal, four bronze ephebes, or young adolescent men, each rested one foot atop the head of a bronze dolphin that spit water into marble conch shells and then into the basin, and each raised one hand up to touch the head of another dolphin in the basin that would stream out water. No turtles. I was left wondering about the disconnect between the fountain’s name and its history, until I learned the full story. Typical to their nature, the turtles arrived slowly. The fountain ran into a problem almost immediately, as the gravitational force of arriving water that powered the fountain was too weak, and the fountain’s water flow was rather feeble. The four top dolphins were removed, eliminating four of the spouts and thus making the remaining five more powerful. Although that problem was solved, the removal of the dolphins left the ephebes looking awkward — what exactly were they holding up their arms for now? During a restoration of the fountain in the late 1650s, the four bronze turtles were added to the vacant spaces, their inclusion a direct contrast to the swiftness of the dolphins below. If you’re unable to make it to Rome to see this whimsical fountain, you can always hunt for its replicas in the United States in Bloomfield Hills, Michigan; Sarasota, Florida; Newport, Rhode Island; and San Francisco.