I was staying at the Baer House Inn, a wonderful bed and breakfast with a fascinating history and the perfect location to explore this historic city, declared by Abraham Lincoln to be the key to winning the Civil War and home of the first bottle of Coca-Cola. Victim of the 47-day siege in 1863, floods, and a tornado in 1953 that destroyed 1,000 buildings, Vicksburg has carried on and created and maintained an impressive inventory of architecturally significant buildings. These are my favorites. 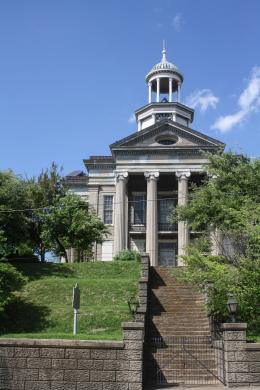 The most beautiful building in Vicksburg is also the city’s most historic. From its prominent position atop one of the highest hills in Vicksburg, the Old Warren County Courthouse has been overlooking the city and the Mississippi River since it was constructed with the assistance of 100 skilled slave artisans in 1860, just in time for Union forces to target it during the city’s siege in 1863. Fortunately, it sustained only one major hit, and the structure stands largely unchanged. Occupying an entire city block, the courthouse is approached via steep staircases leading up from street level and flanked by grassy plots. Each of the four sides is fronted by 30-foot fluted Corinthian columns supporting plain pediments punctured with one elliptical window. A four-faced clock tower rises from the center, topped by an open cupola with slender columns and a dome. Declared a National Historic Landmark in 1968 and a Mississippi Landmark in 1986 — and named one of the 20 most outstanding courthouses in the United States by the American Institute of Architects — the building has been visited by a fair share of historical figures, including Jefferson Davis, Ulysses S. Grant, Booker T. Washington, William McKinley, and Theodore Roosevelt. Today, visitors passing through the original iron doors are drawn here for the Old Court House Museum that opened inside in 1948. Greeted by Boy Scouts working at the front desk, I explored the exhibits crammed everywhere on two floors connected by an intricate iron stairway, from Civil War artifacts to steamboat prints, antebellum clothing to Confederacy currency and flags, grateful for the work of museum founder Eva Whitaker Davis, the woman who saved the formerly deteriorating building from demolition in the 1940s. 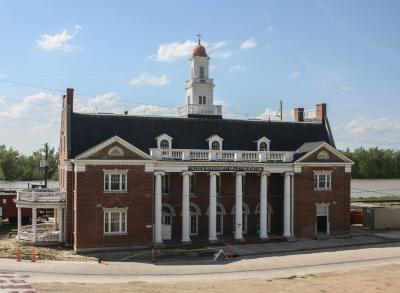 Designed in the Colonial Revival style by the architectural firm of Daniel Burnham & Co. and completed in 1907, this stately three-story edifice on the banks of the Yazoo River served its original purpose until 1959, when passenger rail service in Vicksburg ended. Since then, the interior features have fallen victim to various remodeling, when parts of the building were converted to small offices, the home of a kidney dialysis company, and a couple of private apartments, in between intermittent spans of abandonment. The exterior, however, remains lovely. Six Ionic columns are topped by a balustrade under three dormer windows in the steeply pitched roof. Gables bookmark the ends of the building, one of which features a semicircular columned portico. A white steeple topped by a red dome rises from the center. The City of Vicksburg purchased the 14,000-square-foot building in 2001 with plans to restore it and create a heritage museum. The Great Mississippi Flood of that same year derailed those plans for a while, with the old depot engulfed by water up to its first-floor windows, looking like a brick island surrounded by the elevated levels of the Yazoo River that reversed course and flowed backwards, yielding to pressure from the overflowing Mississippi just over a mile away. After a $2.4 million restoration of the building, The Old Depot Museum opened with exhibits, including terrific scale models, Mississippi River and military boats and ships, railroad memorabilia, and The Fall of Dixie Diorama, a 250-square-foot display depicting the Siege of Vicksburg, manned by more than 2,000 miniature soldiers and all the paraphernalia that accompanied them on the battlefield.

#3 Church of the Holy Trinity 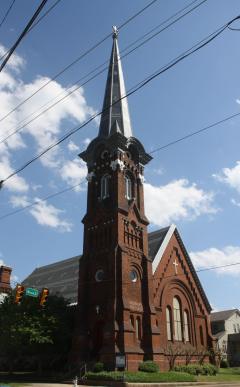 Rising almost 200 feet in the air, the soaring slate-covered steeple of the Church of the Holy Trinity remains one of the defining components of the Vicksburg skyline, visible throughout the city and from the Mississippi River. Built in a Norman Gothic style in 1880 on a corner plot and added to the National Register of Historic Places in 1978, this Episcopal church of local red brick provides a lovely contrast to the steeply pitched slate roof of the church, the same as the steeple, including the diamonds in the patterned design. I entered through the red door at the base of the bell tower, which tapers ever so slightly in subtle setbacks up until the steeple. Inside, I had the opportunity to view half of all the Tiffany stained-glass windows in the entire state of Mississippi, dating back to the late 19th century. Replacing the original clear windows, the stained-glass additions were largely paid for by Civil War veterans from across the re-United States and dedicated to those who died during the Siege of Vicksburg on both sides — the only known windows to honor both the Union and the Confederacy in the same place. Tiffany’s opalescent glass depicts angels and religious figures, such as Mary Magdalene in the Garden of Gethsemane. Particularly striking is “The Good Shepherd” window, in which the lantern at Christ’s feet always seems to be emitting light, regardless of the time of day. 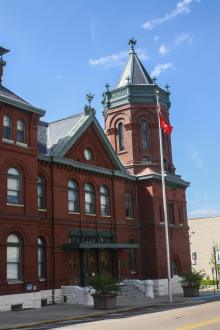 As one of the key contributors to the Uptown Vicksburg Historic District, the Mississippi River Commission Building was constructed in 1894 as the Vicksburg Post Office and Customs House. Fifty years later, the U.S. Army Corps of Engineers Mississippi River Commission moved in and made it their headquarters. The striking four-story brick Romanesque Revival building rests on a stone base, stretching the length of an entire block. A conical roof with fleur-de-lis finials tops the eye-catching eight-sided tower surmounting the roof at the northeast corner. Rich with details, including high-relief terra-cotta panels, round and arched windows, brick quoins, and a slate gable roof with cross hips and gables, the building also features my favorite little touch: sculpted faces spitting chains out of their mouths that hold up the slender marquee over the main front doors. 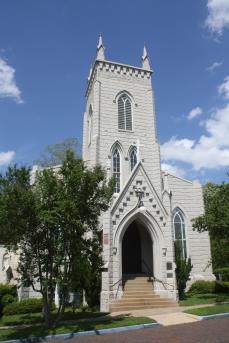 Not as grand as the Church of the Holy Trinity, Christ Episcopal Church stands as a symbol of purity and resilience. The congregation was founded in 1828, and the nave and tower erected between 1839 and 1843, with a Louisiana bishop laying the cornerstone. Originally constructed of brick, the building was clad entirely in white stucco in 1905 (a little rectangular patch of exposed brick remains), suggesting an antebellum innocence of a country church. Pinnacles top the four corners of the short tower, which features a subtle dentil cornice of little Gothic arches, reflecting those of the church’s windows. The curious entrance features a cross atop a pointed arch atop a stepped gable atop a graceful ogee arch. Throughout constant bombardment during the Siege of Vicksburg, during which the church was damaged and the neighboring rectory practically destroyed, the Reverend W.W. Lord conducted daily services here, in the city’s oldest public building.