Much of Buenos Aires seemed to be crumbling around me. Fractured sidewalks challenge pedestrians, graffiti mars so many of the buildings, and animal-ravaged garbage bags litter the streets every night. In spite of all that, the capital of Argentina remains an intriguing city to take in by foot — you never know what you’ll come across here: a couple of adorable monk parakeets squawking on some grass, a protest for government reform, a fantastic outdoor market. All around, the grand architecture of this city provides a wonderful backdrop to your stroll, whether it’s to one of the world’s most beautiful opera houses or the surprisingly gorgeous Pacifico mall. Tucked in between you’ll find the city’s arresting churches of all styles — magnificent houses of worship filled with beautiful art and steeped in history. These are my favorites.

#1 Basilica of the Holy Sacrament 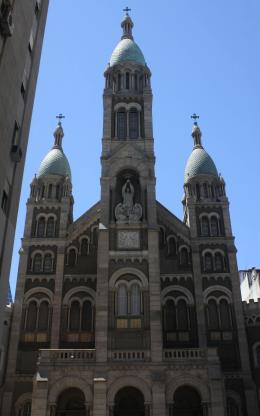 I almost missed the most beautiful church in Buenos Aires. I was in the Retiro neighborhood to check out the iconic art deco Kavanagh Building and the General San Martín Plaza with its monument to the Argentina–United Kingdom war in the Islas Malvinas (or, as the Brits refer to them, the Falkland Islands). I was ready to leave the area when a fortuitous glance down a narrow side street rewarded me with a view of this gorgeous building, and I was quick to see it up close. In the early 1900s, the aristocratic Mercedes Castellanos de Anchorena, who owned the nearby San Martín Palace, commissioned the construction of the church on her land, which she donated to the Congregation of the Blessed Sacrament, because, she said, if she lived in a palace, so should her God. Consecrated in 1916, the Basilica del Santísimo Sacramento presents an eye-catching façade. I stared up at the central tower that soars 164 feet, noting the statue halfway up of St. Peter Julian Eymard (founder of Congregation of the Blessed Sacrament) and two angels kneeling in front of him. Shorter towers flank either side of it, and all three feature arches and a verdigris beehive dome, which are capped by cupolas topped with a cross. Walking between the entrances to two crypts, I entered the basilica, designed in an eclectic style that mixes Romanesque, Gothic, and Byzantine styles. The lavish interior made a lasting impression on me, with its employment of bronze, gold, silver, blue granite, white and red marbles, precious wood carved by Flemish masters, and Venetian mosaics — materials selected by the superior brother of the congregation who was overseeing the work of the architects. Brilliant stained-glass windows line the clerestory above the arched galleries and the walls of the semi-circular apse above the elaborate altar. The groin ceiling, tile floors, and stone columns contribute to the basilica’s opulence. The original organ, made in 1912, contains nearly 5,000 pipes and remains in full working order, and, as the largest church organ in Argentina, adds to this gorgeous basilica’s renown.

#2 Basilica of Our Lady of Piety 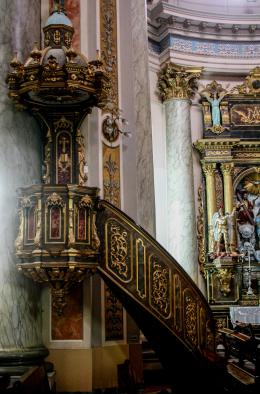 The current Basilica de Nuestra Señora de la Piedad is a far cry from the original church that was erected here. In 1762, Manuel Gómez, who owned much of the land in this area, and his wife, blessed with great wealth but no children, sought permission to build a church to thank God for the former. With permission granted, a brick church with tile roof was erected and lasted for about a century. In a severe state of disrepair, the church was demolished, and in 1895 this new church opened. Created by father-and-son architects Nicolas and José Canale, the basilica’s grandiosity is somewhat stunted by both its position on the corner of two fairly narrow streets and its sober neo-classical façade, with two corner towers and 10 Corinthian columns supporting a sculpted pediment of a Pietà. Inside, however, it’s simply striking — a mélange of color, gold-topped Corinthian columns, broad arches with rows of sculpted roses on their soffits, altars, and stained-glass windows. Four side aisles flank the main nave on which I trod. On my way to the altar, past the lovely pulpit, I looked up at the intrados of the dome that’s virtually invisible from the street. A ring of stained-glass windows between pairs of Corinthian pilasters circles the dome below the coffers, and a chandelier hangs from a long chain attached to the oculus. On top of the marble altar, an unusual Pietà places Jesus on the ground, rather than in Mary’s lap, and a striking mural above it on the dome of the apse adds another splash of color, heavy on the blues and pinks. In 2017, this minor basilica was declared a national historical monument — a definite highlight of your visit to Buenos Aires. 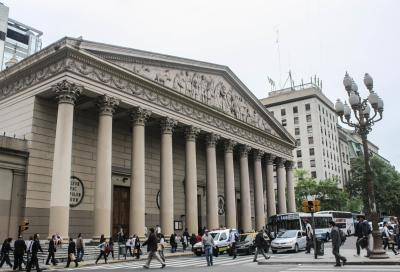 Hugging the northwest corner of Plaza de Mayo in the heart of the city, the Catedral Metropolitana de Buenos Aires holds a special place in the hearts of all Argentineans. The very wide entrance of the city’s main Catholic church was built to impress, even though it was late to the game. The cathedral was consecrated in 1791, but the Neoclassical façade wasn’t completed until 1863 and looks more like an ancient temple or a courthouse than a Catholic church. One dozen Corinthian columns (representing the Twelve Apostles) support the pediment over the portico. A frieze of dentils, garlands, and cherub heads with wings runs across the entire width and wraps around to the sides of the building. Above it, the sculpted relief represents Joseph’s reunion with his brothers and father, Jacob, in Egypt — a nod toward Argentinian unity after some civil wars. I passed under this wonderful work of art and entered the cathedral, walking down the central aisle on a mosaic tile floor under a barrel ceiling. Halfway down, a singular mosaic of three nails used to crucify Christ reminds you of His fate; the mosaic-tile floors on the side aisles feature runners of lilies. Two identical pulpits are suspended on the walls leading to the altar. Among the side altars, wall frescoes measuring nearly five feet by more than three feet, stained-glass windows, and muscular arches, I found elements of the colonial past: The gilt wood altarpiece, created in the Rococo style, dates from 1785, and the oldest item in the cathedral — a sculpture of the crucified Christ — was made in 1671. Of utmost importance to the Argentinians is the mausoleum of General José de San Martín. Resting on a base of marble of various colors, the black sarcophagus contains the remains of the man who liberated Argentina, as well as Chile and Peru, from Spain. Lighted by an eternal flame and guarded by Soldiers of the Grenadier Regiment, it’s surrounded by three life-size female figures representing those three countries. But the cathedral doesn’t rest solely on its history — just a few years ago, the current Pope Francis led Mass here as archbishop of Buenos Aires from 1998 to 2013.

#4 Basilica of Our Lady of Mercy

One of the oldest Catholic churches in Buenos Aires, the wonderful Basilica de Nuestra Señora de La Merced, is also one of its most beautiful. Construction began in 1721 according to designs by Italian architects and lasted for 50 years. A century after that, the church, especially the noteworthy façade, was remodeled (by another Italian architect), with work finishing in 1900. Declared a National Historical Monument in 1942, the putty-colored basilica features a single bell tower, with two levels of bells; a dome; a couple of niches with angel statues; a rosette; and, most noteworthy, a brilliant relief in the tympanum, a sculptural group that depicts the commander of the Army of the North presenting the command staff to the Virgin during the wars for liberation from Spain. With all of its ground-floor windows bricked in and sealed, I expected an extremely dark interior, but the amount of color employed everywhere brings it to vibrant life: the patterned Corinthian columns, the tiled floor, the arch soffets, the gorgeous ceiling, the different color marbles, the stained-glass windows in the dome. Baroque and Rococo altars take extravagance to a new level, with an abundance of ornate statues and columns. A heavy use of gold gives this basilica a positive glow that you’re unlikely to see in many other churches.

#5 Church of the Savior

The first things I noticed about the Iglesia del Salvador were the bright blue frieze with the words “Jesv Cristo Salvatori” and the bright blue pediment with gold stars above it. These splashes of color — and the three bright mosaics below them — brighten up the façade of one of the most important Jesuit churches in Argentina, which also sports four soaring Corinthian columns and two domed bell towers, one with a clock. Construction of the Renaissance-style church began in 1872, thanks largely in part to private and quite generous contributions from two families, and lasted until about 1887. Inside, after passing through the doors with stained-glass windows in the vestibule, a dazzling display of artistry greeted me. Statues adorn an abundance of side chapels, two of the grander ones featuring pink Corinthian columns, and medallion frescoes of various scenes of Jesus preaching cover the ceilings of the two side isles. Bronze sconces help illuminate the interior, and wonderful beams made from the quebracho tree line the ceiling. On the impressive altar, columns and a pediment bear a striking resemblance to those on the exterior of the church, and two Carrara marble angels face the gorgeous green malachite columns that support the tabernacle. The church was declared a National Historical Place in 1942 — right around the time Juan Perón was frequently attending Mass here.