I first encountered the Fire Department of the City of New York during a school trip to my local firehouse in the second grade. I didn’t spot the anticipated Dalmatian, but I did receive a nice introduction to what members of FDNY do. When they’re not willingly throwing themselves into conflagrations to save you, your children, and your beloved pet Fluffy, they’re busy responding to gas leaks and medical emergencies, keeping their vehicles in tip-top shape, and making trips to your local grocery store, supporting their reputation as great cooks. It’s only natural that these heroic men and women deserve the best workplaces to perform their jobs, and there are plenty of instances where their firehouses reflect their vital role in society. These are my favorites.

Sandwiched between banal office boxes in Lower Manhattan, the former Engine Company 31 stands as one of New York’s most romantic buildings. Designed in 1895 in the style of a Loire Valley chateau by Napoleon LeBrun, New York’s sole firehouse architect at the time, the firehouse was designated a New York City Landmark in 1966 and added to the National Register of Historic Places in 1972. Today it seems surprising that such an elaborate design would be used for so utilitarian a structure. The entire spirit of the building, with its corner tower, recalls a romantic 17th-century fairy tale. Window trims and the doors of the three bays — two for fire engines and the third for water towers employed in battling blazes in tall buildings — are painted bright red, a lovely contrast to the building’s limestone and tan bricks, dormered slate roof, and copper cresting. In 1972, the Fire Department vacated the building, and it’s now home to the Downtown Community Television Center.

Built in 1891, the Erottaja Fire Station is the oldest fire station still in use in Helsinki, having served as the city’s chief fire station until 1975. Theodor Höijer, Finland’s leading architect in the late 19th century, designed the red-brick structure not only to fulfill its basic functions but to add an impressive architectural achievement to the city. Inspired by German and Viennese military architecture, Höijer created a fire station that is often cited as the most beautiful in Finland. Erottaja features arched and ocular windows, and a 138’ central tower that conjures associations with Giotto’s Bell Tower in Florence, Italy, and Berlin’s Red City Hall. Originally used for observation and for drying hoses, today the tower is open to the public only two days per year (Helsinki Day and Helsinki Open Doors Day), but the Fire Museum in the station is open year-round. It makes for an interesting stop to learn about Helsinki’s fire and rescue services, fire safety, and the history of the second oldest municipal professional fire brigade in all the Nordic countries — operating since 1861, 30 years before the station was erected.

The greatest concentration of historic buildings in Brooklyn, New York, can be found in the downtown neighborhood, just feet from my apartment. And one of the most intriguing, and handsome, is the Old Brooklyn Fire Headquarters. Just like Manhattan’s Engine Company 31, this firehouse was made a New York City Landmark in 1966 and added to the National Register of Historic Places in 1972, and it, too, was vacated by the Fire Department in the 1970s. The Richardsonian Romanesque Revival fire station, built in 1892 by 31-year-old architect Frank Freeman, is now 18 residential apartments. Presently overwhelmed by bigger neighbors, it’s hard to imagine that the seven-story lookout tower once had sweeping views of the borough. The tower and its adjacent five-story section were constructed with orange brick, embellished by terra cotta detailing and vegetal keystones. Lovely turrets crowned with conical roofs rise up the façade, and both sections are topped by pyramidal red-tiled roofs trimmed with copper. On the ground floor, a bold, broad arch of red sandstone, carved with flamboyant vinelike details, harkens back to when fire engines passed through this entrance. 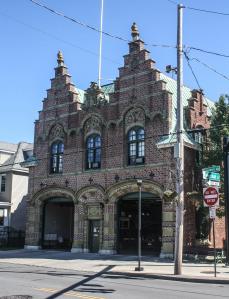 Established by Dutch colonists in the late 17th century, Albany has surprisingly few buildings in the Dutch Colonial Revival style. One of these rarities is the handsome Hook & Ladder #4 firehouse, a fanciful brick structure designed by a local architect and completed in 1912. Its most distinctive feature is the six-step gables, straight out of Amsterdam, but a closer look reveals some details of a more local significance. Two gently arched openings for fire engines straddle the pedestrian entrance, topped with a plaque carved with “AFD 1910” in raised lettering. Alternating bands of brick and olive-green terra cotta flank these entrances, and three of the four heads that serve as the corbels represent important public officials from the time of the firehouse’s construction (the fourth is allegedly the architect himself). Five wrought iron crosses hang above the entrances, and trefoil windows on the second story have been bricked in. Look farther up to see the medallions, the crest with two gargoyles bearing the city’s coat of arms, and the pair of three-foot-tall beavers holding a shield atop the gables. 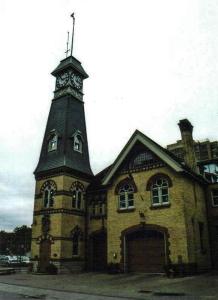 One of the oldest active fire stations in Toronto, Station 312 was originally constructed in 1878 for the village of Yorkville, when horses pulled water and fire hoses on carts. Only five years later, Toronto annexed Yorkville, and the station became part of the Toronto Fire Department. The two-story station was built with bold yellow brick with orange highlights (made in the local brickyards) and looks more like the home of a fable princess rather than a Victorian firehouse. A five-story tower on the corner rests on a stone base and bears a coat of arms from the old Yorkville Town Hall, a soaring sloped roof with shingles, and clocks on all four sides. The original two bays, now framed with welcoming lights, received an addition in the 1970s to accommodate a third truck. Despite its sleepy fairy-tale appearance, Station 312 is one of Toronto’s busiest firehouses, responding to more than 5,000 calls per year.