After spending a full day in Lahemaa National Park and another in Kadriorg Park, I devoted an entire day to the Old Town of Tallinn, Estonia. After breakfast at my wonderful accommodations, Savoy Boutique Hotel, I strolled down medieval passageways for hours before heading off to investigate one of Northern Europe’s most charming squares.

The epicenter of activity in Tallinn’s Old Town, Town Hall Square buzzes with activity from dawn through dusk. Tourists fill the city’s main square throughout the day and then linger at the outdoor seating of the restaurants on three sides of the square. As soon as I stepped into this open space, I easily understood the reasons for its popularity.

Town Hall anchors the lively square before it.

Stately merchant houses, painted in subtle pastel colors (plus one bolder individual, in eye-catching salmon), frame three sides of the square. Town Hall Pharmacy — the oldest commercial enterprise and the oldest medical establishment in the city, and one of the oldest continuously operating pharmacies in Europe — has been operating out of one of these buildings since 1422, at one time selling such nostrums as burnt bees, mummy juice, and powdered unicorn horn. You can purchase more modern medicines here today (as well as Communist Soviet artifacts and trinkets in the antique shop section).

From the center of the square, I was able to see five of Old Town’s spires, including the minaret-like one right in front of me, atop the square’s star of the show: Town Hall. First mentioned in 1322 and named a UNESCO World Heritage Site in 1997, Tallinn’s gray limestone Town Hall remains the oldest, and the only surviving Gothic, town hall in the Baltics and Scandinavia, which meant, of course, that I had to learn more about it.

Only two stories high, with a steeply pitched red clay-tile roof bookended by gables and its iconic tower, Town Hall overflows with history, from its street-level arcade to the vane at the tippy top of the 210-foot-tall tower. Originally a warehouse to introduce new goods, the building morphed into a playhouse in 1364 and a courthouse before switching to the town hall in 1372. The independent town’s economic prosperity and growing importance as a member of the Hanseatic League prompted expansion of Town Hall. Its current dignified appearance dates back to 1404, and it has survived largely unchanged ever since — except for the tower. 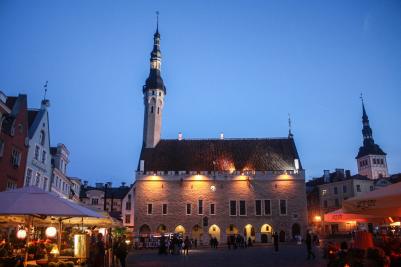 Operating out of this building, the Town Council declared laws, struck money, appointed people to official positions, monitored discipline and trading in Tallinn, held court, was responsible for the town’s security, kept the military forces, and represented Tallinn in international affairs. It also performed some rather odd duties, such as determining the limit of jewelry a jeweler’s wife could wear.

Such power needed a formidable building as its base, and this one fits the bill, although it’s not without its oddities. The first thing I noticed was the building’s asymmetry. Merchants of yore, and visitors of today, would find shelter from the rain and snow under the street-level arcade, which features eight Gothic arches supported by nine pillars, one of which served as a pillory where criminals were chained, put on display for the townspeople to dishonor and mock them. But two small portals to the right — one smaller, one larger (with the city’s coat of arms above it) — throw off the balance.

Above the arcade, the rough-hewn façade features a series of 10 quadrangular windows of different sizes on the second story, irregularly spaced to mark the three different rooms within rather than neatly laid out for external harmony. A small circular clock above them is also off-center. At the roofline, a crenelated battlement with decorative loop-holes and a couple of dragonhead gargoyles runs the entire length of the building. Two chimneys rise from the rooftop — one in the center, one to the east. 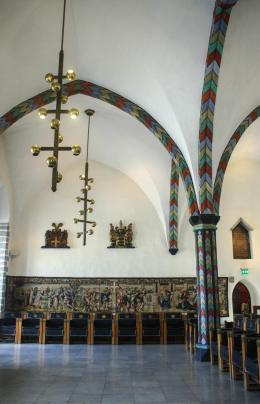 With its tapestries and colored pillars, Citizens Hall is historical eye candy.

And then there’s that tower. The original Gothic pyramidal tower, from 1404, was replaced in 1627 by a Late-Renaissance version, although it kept the vane — a figure of a warrior named Old Thomas, dressed in the clothing of a 16th-century guard, that was added in 1530. The new octahedral tower features a three-piece baroque spire with open galleries and an outdoor observation level. From here, guards would be on the lookout for fires or invading enemy troops. At the sight of danger, they would use a rope to pull the bell clapper and sound the alarm. All of that survived until 1944, when a Soviet air raid during World War II destroyed the spire (as well as about a third of the entire city). Rebuilt in 1952, it once again looks over the city, with a new Old Thomas keeping watch at the very top.

After taking that all in, I entered the cool interior to check out some of its historic artifacts and spaces — rooms that once served as, among other uses, a torture chamber, wine cellar, court, and treasury.

By far, the most appealing room is Citizens Hall and its very distinctive elements. Everyone from influential politicos to vagabond musicians has been welcomed here throughout its history. The two octahedral pillars caught my eye first. Painted in alternating bands of red, green, cream, and blue in a herringbone pattern, the pillars support a wonderful arched ceiling, with its consoles and vaults, reminiscent of, perhaps, an abbey, with the color pattern continuing along the ribs. The outstanding tapestries along the walls claim even more importance, even though they are not the originals, which were knitted in the Netherlands in 1547 using dyed wool with natural textile colors. These copies were made in Oxford, England, painstakingly recreating the details of the originals. The two larger tapestries illustrate scenes from the life of King Solomon (along with Tallinn’s coat of arms), while five shorter ones depict colorful plants. From the windows in this room, I looked out at the entire square and its lively activity, wondering how different, or how similar, the scene would have been half a millennium ago.

Old Thomas survived centuries of history and a Soviet bomb.

In the spacious parlor (the building’s most important room, where aldermen met and voted), I admired the vaulted ceiling with low-relief keystones, the money closets set into the walls, the lunette paintings, and the most important pieces — the old (from about 1374) and rare medieval wood benches with carvings of Samson and Delilah, Aristotle and Phyllis, Tristan and Isolde, and Samson fighting the lion.

Scattered throughout the rest of Town Hall as part of the museum, various historical objects caught my attention, such as 15th-century letters written to the Town Council, medieval firefighting equipment, maps of the Hanseatic League, and revolutionary leaflets from 1905. I was most delighted by the original Old Thomas, now safely housed in the cellar.

As I emerged from Town Hall and made my way to what would prove to be an outstanding dinner at Kuldse Notsu Kõrts, I considered the most provocative thing I had learned here: Town Hall had no direct prototype. Its local builders and stonemasons may have adapted elements from other countries and structures, such as public buildings in Italy or fortresses, halls, churches, and affluent homes from other parts of Europe, but they did so in a manner that relied on no single complete example, intertwining different traditions and vocabularies into a unique building that was clearly built to last. And I think that was the most impressive thing of all.