The end of the season was rapidly approaching. More people were surrendering their room keys at the front desk of the Many Glacier Hotel than checking in. In just a couple of days, this magnificent lodge, tucked 12 miles into Glacier National Park in northern Montana, would be closed until the following spring. Temperatures fell a bit each day, although sitting out on the lodge’s expansive balcony in a seductively comfortable Adirondack chair at night was still enjoyable, as long as I was wearing a few layers and caressing a cup of hot chocolate as I gazed at the countless stars above me and the blackness directly ahead of me.

In the early morning, that blackness revealed itself to be a jaw-dropping view of the 8,855-foot Grinnell Point, the 9,321-foot Mount Wilbur, and their flawless reflections in Swiftcurrent Lake. Immediately inspired by the grandeur outside my window, I hurried through a hearty breakfast at the lodge’s Ptarmigan Dining Room and then set out on my morning hike to insert myself into the beguiling scenery.

Armed with necessary supplies, including a highly recommended can of bear spray, I picked up the beginning of the Swiftcurrent Lake Nature Trail at the lodge’s doorstep. The 2.6-mile easy walk looped around the lake, never deviating much from its 4,900-foot elevation and always offering grand vistas of the lake and the serrated mountains enclosing it. From the opposite side of the lake, I took in the view of the sprawling lodge. Up to five floors in some sections, and housing a tremendous lobby and 215 rooms in two Swiss-style chalets, the lodge is massive; set against the towering mountains around it, it seemed positively Lilliputian.

About two miles into my hike, I had not crossed paths with another human in over an hour and was comfortably immersed in the solitude. But when I turned a blind bend onto a wooden bridge over a stream and spied a very large brown something rustling in the plants beside the water about 20 feet away, I stopped dead in my tracks, surprised by sudden movement. Please don’t be a bear, please don’t be a bear…

Alas, it was not a bear. Instead, a gentle female moose emerged from the woods and halted when she spotted me.

A female moose, also out for an early-morning stroll in the woods.

Having just overheard a conversation during breakfast about a local mayor who had recently been trampled to death by one mighty aggressive moose, I was still on my guard, as I was in clear but accidental violation of the park’s recommendation for the distance you should keep from a moose: 25 yards. So I made a very quick evaluation of my situation: the moose was alone, I didn’t see any calves she might be protecting, and I was on a railed bridge. That all seemed to suggest I’d be just fine standing where I was.

The moose, too, apparently made its own conclusions and decided I wasn’t worth considering any further. As she stooped down to take a lengthy drink, I leaned against the railing and admired the beauty of the beast. She would occasionally look up to survey her surroundings, gazing in my direction every now and then, perhaps to ascertain my motives. We were both far from the lodge, and we were both enjoying a leisurely stroll in the woods; there was no reason to think we shouldn’t be friends.

Her thirst satiated, she strolled across the stream to the other bank and was swallowed up in the thick vegetation. As I mentally thanked her for sharing a moment with me, I wondered if she had a mate, and if he might be nearby. My curiosity was satisfied all of 30 seconds later, when another large brown something started to emerge from the same spot she had. Please don’t be a bear, please don’t be a bear…

A full rack of antlers made it clear this was not a bear. When the male moose reached the stream, he, too, immediately noticed me and stopped. Taller, larger, and stronger than his mate, the bull locked eyes with me until he realized I meant it no harm. As I watched him drink from the stream, I knew perfectly well this would be the highlight of my day. I wondered if he could sense my excitement over this chance meeting, or if he could pick up on my near euphoria when I saw yet another something moving in the woods. More moose? The whole family? No, it was just a woman — a senior citizen in an orange parka. 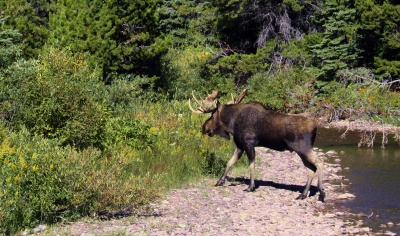 After our brief encounter, the bull moose went off in search of his mate.

She joined me on the bridge. “What a bull!” she exclaimed.

I nodded in agreement, a little disturbed by her presence. I wanted to be alone with him. She was intruding on my moment, and when I saw her husband approaching, the magic dissipated even more quickly.

“Did you see the cow?” she inquired.

“Yes,” I replied. “She wandered off into the woods over there,” I said, pointing.

“So she took off as soon as he showed up, huh?” she asked with a noticeably acerbic edge in her voice. “Can you blame her?”

I didn’t know how to respond. Was this some sort of moose behavior she was privy to that I was not? Or was it just a bit of unnecessary male bashing?

“What? What did you say?” her husband snapped as he trundled up beside her.

“You were being nasty, weren’t you?”

The moose and I looked at each other and apparently had the same thought: get away from them. With an audible snort, he crossed the river and followed after his mate. With a bit of an audible snort myself, I neglected to say farewell to this couple who had clearly been married for too long and continued on my way in search of more pleasant company.