The bustling Saturday Market under the Burnside Bridge in Portland, Oregon, attracts big crowds who come out to buy arts, crafts, and food. It’s also a great place to people-watch, and you never know who you’ll meet: in my case, a monk who wanted to know if I cared to discuss yoga. I did not. I was on my way to Lan Su Chinese Garden, one of the best Chinese gardens to be found outside China.

I’m rather fond of Chinese gardens, with their wonderful blend of elements that transcend solely flora. I have visited quite a few, from the Seattle Chinese Garden in Washington State to the outstanding Dr. Sun Yat-Sen Classical Chinese Garden in Vancouver, British Columbia.

In Portland, I walked through Chinatown Gateway, a paifang constructed in 1986 with five roofs, 78 dragons, and two huge bronze lions, and into what had been the largest Chinatown on the West Coast in 1890. The entire ensemble, composed of bronze, granite, marble, steel, tile, and wood, was built in Taiwan and shipped to Portland, where it was installed in only one week. It’s a magnificent entry into the city’s Chinatown, a much subtler neighborhood than, say, San Francisco’s or New York’s, with some Chinese restaurants and subdued touches like red streetlamps and the occasional line of a pagoda roof over a storefront. It’s also home to Lan Su Chinese Garden, just a couple of blocks away.

Part of the garden’s mission is “to cultivate an oasis of tranquil beauty and harmony,” and upon entering it through its whitewashed walls with cut-out windows, it was easy to see it had achieved that goal. Occupying an entire city block and enclosed by low-rise walls, the garden opened in 2000 as the Portland Classical Chinese Garden, one of the most authentic and largest Suzhou-style Chinese gardens outside China. It took 64 artisans from Suzhou, a city of 10 million next door to Shanghai (and a sister city of Portland), just over a year to create this urban oasis. Ten years later, it was re-christened with its current name, an amalgamation of Lan (for Portland) and Su (for Suzhou). Lan is also the Chinese word for “orchid,” and su is translated as “arise” or “awaken”—thus, “Garden of Awakening Orchids.”

Just past the entrance, I was transported to 16th-century China, more specifically, into the Courtyard of Tranquility, a beautiful outdoor space that introduced me to a re-created private home and garden of a wealthy family. I stepped through a quatrefoil open doorway in the courtyard wall and to the Knowing the Fish Pavilion. The pavilion’s name stems from a conversation between two philosophers. When one says he finds the fish in the stream by which they were walking to be happy, the second challenges him, saying he’s not a fish, so how would he know if they were happy? The first rebuts with “You are not me. How do you know I don’t know the fish are happy?” Here, under the pavilion’s sloping roof with sharply upturned edges, I stopped for a while and watched the orange, black, and white mottled koi approach me hungrily. They did, indeed, seem happy.

Circling around the garden, I arrived at a beautiful vantage point. I was treated to a spectacular display of yin and yang balances—light and dark, rough and smooth, natural and manmade. The four essential elements of this type of garden—water, stone, plants, and architecture—blend together in a harmonious symphony that lulled me into complete peacefulness. Before me, Zither Lake occupies 8,000 square feet of the garden’s grounds. Framed all around by pavilions and some of the hundreds of plants and crossed by several bridges, the lake exudes a magical serenity that melts away the sounds of busy Portland just outside the walls. A set of six carved gingko panels behind me beautifully depict ancient gardens in Suzhou, one of which contains a couple of lines from a 16th-century poet: “Most cherished in this mundane world is a place without traffic; Truly in the midst of the city there can be mountain and forest.” Here in the middle of Portland, just like in the middle of Suzhou where these gardens proliferate, these words rang pure and true. 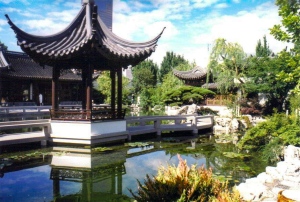 The Moon Locking Pavilion owes its name to the night.

I wandered into the Scholar’s Courtyard, adjacent to the Scholar’s Study, where the male members of the family would study for civil service exams, write poetry, read, and practice calligraphy. The quiet courtyard teems with symbols, including plum trees and stone mosaics of plum blossoms on cracked ice, signaling the return of spring and symbolizing their endurance through winter. I strolled along the bridge that seemingly floats above part of Zither Lake to the beautiful Moon Locking Pavilion at the heart of the gardens. On certain clear nights, the reflection of the moon in the lake’s water is framed by the shadow of the pavilion, a nod to China’s centuries-old astronomical observations and appreciation.

I retraced my steps back over the bridge and moved on to the two-story Tower of Cosmic Reflections, where the women of the family would gather to manage the affairs, including the financial ones, of the household. Today, it’s where I stopped for a spot of tea. The selection of white, green, black, pu’er, oolong, and herbal teas changes with the seasons, as does the view of the gardens—always beautiful, but with different blooms, angles of sunlight, and sky conditions throughout the year. And the dumplings, buns, noodles, and mooncakes that you can order encourage you to linger in this idyllic place.

Striking carved panels can be found in several of the pavilions.

Refreshed, I continued my circular route until I stepped into the Hall of Brocade Clouds, with its gingko panels with intricate carvings that depict the “three friends of winter”: bamboo, pine, and plum. From here, through gorgeous lattice doors and windows, no matter which direction I looked, the open view impressed me, just as intended. Amid the buildings, the lake, and the 500 tons of rocks used to create this space, more than 400 species of plants and trees take root, 90 percent of which are indigenous to China. Bamboos, camellias, magnolias, orchids, osmanthuses, peonies, perennials, rhododendrons, and water plants are only a few of them, intermingling with bamboo trees and unusual shrubs.

By the time I was ready to depart, I had reaffirmed my admiration for Chinese gardens and shed a few worries along the way. Portland is a fairly laid-back city, but even here you may need to take a break from the daily grind or the ambient urban cacophony, even if you’re on vacation. Lan Su Chinese Garden is the perfect place to resettle yourself and appreciate how nature and man can get along seamlessly.