For at least 20 years, I had wanted to visit Namibia for several reasons, one of which was its fascinating ghost town, Kolmanskop. When I finally had the opportunity to travel to this southwestern African nation, I didn’t hesitate at all. Soon, I was wandering around the sandy streets of Kolmanskop, one of the world’s top five ghost towns, where the desert is gradually overtaking the couple of dozen once-handsome buildings that remain, filtering inside their rooms through shattered roofs, splintering doors, and broken windows. It’s one of the five best things to see in Namibia, well worth the long drive from many of the country’s other highlights.

Revel in your daily sunset from the hotel’s private beach.

Fewer than 10 miles west down the road from Kolmanskop, I arrived at my accommodations for a couple of nights. At the very end of a bumpy street in the heart of Lüderitz, the Lüderitz Nest Hotel makes the most of its waterside location in one of only about a dozen cities and towns in Namibia on its nearly 1,000-mile coastline. Painted orange and egg-nog yellow, with some circular porthole windows, the oldest upmarket hotel in the city boasts rooms that all offer water views of Lüderitz Harbor surrounding it on three sides. Now in business for more than 20 years, the hotel appreciates its past but also looks to the future, becoming the first hotel in Namibia to replace environmentally damaging plastic straws with recyclable glass ones.

After checking in, I headed down the hall to my room, peering out the windows at the private, enclosed outdoor space where guests can enjoy the ear-shaped swimming pool and relax on comfortable chaises under tall palm trees. My comfortable room was equipped with air-conditioning that I never needed and free WiFi. I didn’t linger here, however. I was anxious to explore the city and its wonderful curiosities — a very easy and short walk away. 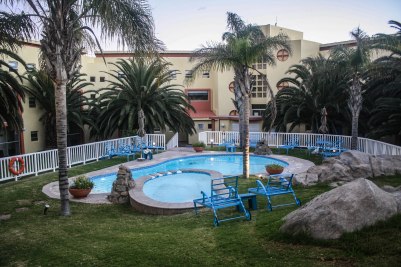 Make sure to reserve some time poolside under a palm tree.

Parts of this colonial relic of about 12,500 people feel like a German village from the 1910s, stuck in the past and tied to the diamond industry. Along streets named Bahnhof, Vogelsang, Berg, and Bismarck, I was fascinated by the Art Nouveau architecture that seems such an anomaly in an African nation. Well-maintained landmark buildings named Haus Grünewald, Haus Eberlanz, Bödikerhaus, Schroederhaus, and the Deutsche Afrika Bank Building sport gable rooflines and colorful façades, and add a very well-defined reference to Namibia’s past as a Germany colony.

By the time I returned to the hotel, the sun had begun its descent below the hills across the harbor, casting the sky in a palette of increasingly intense yellows. I walked across the hotel’s private tidal beach to the jetty that extends out into the harbor. I watched the brilliant sunset as waves rumbled by me. Behind me, atop a rocky promontory, the iconic Felsenkirche (one of the oldest Lutheran churches in Namibia and looking like a structure straight out of Bavaria) heated up with the warm colors of dusk before artificial lighting bathed it for the night like a coastal beacon.

I headed through the airy lobby of the hotel and stopped for a pre-dinner Namibian beer at the upper-level Crayfish Bar & Lounge before returning downstairs to the Penguin Restaurant. At my table beside the long, deep-blue aquarium, I enjoyed a wonderful dinner of mixed salad leaves with cherry tomatoes, cucumbers, onion, and a creamy herb dressing; sole meunière pan-fried in lemon-caper butter with potato wedges; and an unbeatable dessert of grilled peaches on a raspberry sauce with toasted almond ice cream.

Creative desserts cap off an excellent meal in the hotel’s Penguin Restaurant.

Completely sated, I returned to my quiet room, where the distinct sound of waves crashing with some serious force on the rocks lured me to the window. Directly below my room, high tide was battering the rocks, flooding over them and casting fountains of spray upward. I spied the surreal bioluminescence of whatever organism was living there, shimmering in the water in mysterious blue-white magnificence. I couldn’t have asked for a more magical way to end the day, and the restful sleep I enjoyed left me fully energized the next day to take a catamaran on choppy waters to Halifax Island to see Penguin Island, where 7,000 African penguins live in a protected colony, and to drive around the areas surrounding Lüderitz, where springbok, oryx, and flamingos are the roadside attractions, and deserted beaches tempt you to stroll along the sand, collect perfect seashells, and brave the cool Atlantic waters.

On my final morning here, after a buffet breakfast with all the usual suspects (orange juice, eggs, toast, bacon, yogurt, fresh fruit, and a yummy vanilla-chocolate cupcake), I reluctantly checked out of this fine hotel and departed this charming city. Lüderitz is about a seven-hour drive from the capital of Windhoek, more than nine hours from the towering orange sand dunes outside Swakopmund, and a full 12 hours from Namibia’s famed Etosha National Park. I assure you that the time you spend in your car driving here — and at the Lüderitz Nest Hotel — will be well worth the effort.