I spent a lot of time outdoors in Croatia, lured from inside four walls to enjoy this country’s magnificent natural attractions. The pristine Adriatic beaches, the island of Lokrum almost all to myself, the superior Plitviče Lakes National Park, the walk atop the stone walls and fortifications encircling Dubrovnik’s Old Town — they all beckoned me outside. But I also allotted plenty of time to check out the country’s rich assortment of museums and gain a better understanding of Croatia’s history and culture. These are my favorites.

My favorite museum in Croatia is not a happy place. In fact, it is rather depressing and disturbing — the exact opposite of what you’d like on your vacation, especially when you’re in such a gorgeous and wonderfully atmospheric place like Dubrovnik, “the pearl of the Adriatic.” Tucked into its ancient Old Town streets, War Photo Limited challenges visitors to see beyond the city’s iconic orange roofs, encircling fortress walls, and photogenic setting on the Adriatic Sea. The museum serves a dual purpose: to showcase the danger, damage, destruction, and demoralization of war, and by extension, to make you appreciate everything you have, because it can all disappear overnight. Even if you’re not interested in armed conflict, chances are that you’re carrying a camera with you if you’re visiting Dubrovnik, and that alone should draw you in, to see the power and emotion that others can capture with their own equipment. Over the museum’s two floors, stark images of war and its devastating affects around the world by renowned photojournalists with impeccable timing line the walls in both permanent and temporary exhibits. The former is a collection called “The End of Yugoslavia,” chronicling the implosion of the former Balkan country in striking color and black-and-white images. In addition to expected photos of exploding bombs and soldiers engaged in battle, the collection includes images of civilians trapped in the hostilities raging through several of the regions of Yugoslavia that would ultimately become independent nations, including Croatia. Former temporary exhibits include scenes of conflict in Colombia, Iraq, Liberia, Syria, and Ukraine, parts of which continue to be displayed in the Limited Edition Print Room. War Photo Limited fully achieves its intended mission, to dispel the myth and romanticism of war and present it as it actually is: scary, heartbreaking, and life-altering. You’ll look at your life and the world in a different way after a visit to this superior museum.

From the main train station, the Strossmayer Gallery of Old Masters is just a few blocks away, located along the edge of one of three adjacent parks that provide a wonderful green lung in the heart of the Croatian capital. Housed in the stately neo-Renaissance Croatian Academy of Arts and Sciences building, the gallery opened in 1884, named after its founder, Josip Juraj Strossmayer, the bishop of Ðakovo. On your way inside, make sure to take notice of the Baška Tablet, a white limestone slab from 1102 inscribed in Glagolitic script, the oldest known Slavic alphabet. Only about 250 of the gallery’s holdings of 4,000 works are on display, and the collection falls mostly into three groups: Italian, French, and Northern European (Dutch, Flemish, and German) painters from the 14th through the 19th century, along with a small smattering of Croatian artists. Although many of the artists’ names were unfamiliar to me, the collection also includes works by heavyweights Fra Angelico, El Greco, and Van Dyck. As one of the top five things to see in Zagreb, the Strossmayer Gallery is a great way to begin or end your day in one of Europe’s most underrated capital cities. 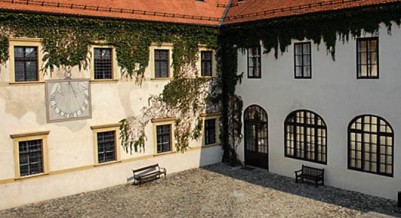 Zagreb has long been an important trading center, battled over for centuries, from the Romans to the Hungarians and Tatars to the Nazis and the Communists. In 1242, it was a free royal city, and it became a capital city in 1557, 1941, and 1991. The Zagreb City Museum traces all that, along with the city’s most important cultural, economic, historical, political, and social events from prehistoric times through today. Founded by the Brethren of the Croatian Dragon Society in 1907, the museum explores all those occurrences through its collection of 4,500 rare and ordinary, impractical and useful objects and relics that accompanied Zagreb’s evolution, spread over 45 themes. There’s an Iron Age settlement, medieval city signs, architectural models of a critical monastery and of the Lower City, and exhibits on 18th-century commercial life, the Croatian National Revival, the city’s theatrical and cinematic life, cemetery monuments, 20th-century wars (World War I, World War II, and the Balkan wars in 1991), and the 900th anniversary of the founding of the Zagreb Diocese. You’ll learn about punishment for witchcraft (death), the city’s lovely parks, and consumer packaging. And you can do it all in a historic setting: The museum is housed in a building from 1650 that was once the Convent of the Poor Clares, complete with courtyard that turned up a host of archaeological finds that are now part of the museum’s collection. 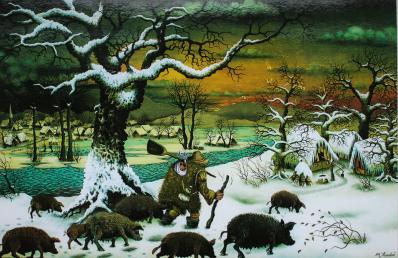 With only about 5 percent of the museum’s collection of 2,000 paintings, sculptures, drawings, and prints on display (and only 15,000 visitors per year), the small Croatian Museum of Naïve Art is easy to overlook. But I highly recommend that you include it on your list of things to see in Zagreb. Established as the Peasant Art Gallery in 1952, it’s the world’s first museum dedicated to naïve art — creations by artists without degrees or formal education or training. Now housed in the 18th-century Raffray Palace, the museum focuses overwhelmingly on Croatian artists — rural peasants, clerks, farmers, and shopkeepers who were blessed with artistic talents. At first, they created rustic landscapes, but then the naïve art form expanded to idyllic countrysides, architectural panoramas, and darker themes. Particularly eye-catching are Emerik Feješ’ unrealistically colored architectural paintings of such subjects as the Town Hall in Brussels and the Parliament building in Budapest; Ivan Rabuzin’s happy flowers and landscapes; Martin Mehkek’s portraits of gypsies; and Nikifor’s Krynicki’s cityscapes. And, of course, there’s my favorite painting, Ivan Večenaj’s Evangelists on Calvary (1966), one of the world’s top five treatments of Jesus’ Crucifixion — a hauntingly disturbing image filled with realism and symbolism amid bold color choices and unforgiving brutalism. This one piece alone is worth a visit.

Deep within Diocletian’s Palace in the seaside city of Split, amid the haunting, narrow alleys and ancient walls, I found the Papalić Palace, a palace within a palace. Built in the 15th century for the well-respected and noble Papalić family, the palace now houses the Split City Museum, founded in 1946. But the building itself is worth seeing for its own merits. I entered the late-Gothic palace through an elaborately carved gate, with the family’s coat or arms above, indicating their importance. This opens to a small courtyard with its twin arches, wall fountain, loggia, and external staircase leading up to the first floor and the Gothic windows. The interior has been restored and sometimes modernized for the museum’s use. The well-preserved wooden ceiling in the first-floor hall remains, and the first-floor dining room is furnished as it would have been when the Papalićs sat down for a meal. As for the museum, the exhibits include lots of ferocious medieval weaponry as well as the genteel accoutrements of an aristocratic family. The development of the city is also well represented, going back to when the Roman emperor Diocletian retired and had his massive palace built in the fourth century in which to enjoy his final years. Plenty of coins, documents, drawings, paintings, manuscripts, maps, monuments, photographs, and sculptures all help to tell the historical story of Split — a city that, at various times in its history, has been Greek, Roman, Byzantine, free, Venetian, Ottoman, Italian, French, Austrian, Yugoslav, and Croatian.