Here in “the Heart of Dixie,” despite the occasional tornado warnings and an electrical storm that sizzled a transformer and knocked the power out at my hotel in Montgomery, I was enjoying a stretch of fine weather during my loop through the deepest parts of the South. I was focusing on the lower half of the state, receiving a good dose of true Southern hospitality while I checked out some of Alabama’s most memorable and intriguing attractions. These are my favorites.

#1 Board the USS Alabama

Even if you’re a hardcore pacifist, you’ll still be impressed by the USS Alabama, a South Dakota–class battleship commissioned in 1942 and now permanently docked in Mobile Bay. Added to the National Historic List in 1986, the ship earned nine Battle Stars during World War II, having served from the North Atlantic to the South Pacific and shot down 22 enemy airplanes. Its digits are astounding: At 680 feet long, the ship weighs more than 70 million pounds (without ammunition), carried a crew of up to 2,500 men, and can hold two million gallons of fuel. As I wandered all over the ship from stem to stern, up and down vertical ladders and through some very claustrophobic spaces, I could still detect the smell of oil. It’s an amazing experience to see how the crew lived aboard such a large ship created for destruction that also functioned as a floating city, what with its kitchen, butcher shop, laundry, tailor, barber shop, brig, mess hall, post office, and bunks hanging from the ceilings in stacks of three amid an extensive network of pipes. You’ll learn a good deal about daily naval life as well as the random historic tidbit or two: A small exhibit below deck reveals that toy train legend Joshua Lionel Cohen stopped manufacturing his product during the war so as not to funnel steel from military needs.

#2 Explore the Historic Districts in Montgomery

Almost a dozen historic districts exist in the capital of Alabama, and you’ll find many of Montgomery’s most beautiful buildings within their confines. Not only do they provide some striking architecture, they also teem with significant history lessons. For instance, in Centennial Hill, you can tour the Alabama State Capitol (1851) and stand in the hall where the Confederate States of America was organized on February 4, 1861; check out Dexter Avenue Baptist Church (1889), where Dr. Martin Luther King served as pastor; and, for a good dose of Civil War education, pop into Jefferson Davis’ house (1835), which served as the First White House of the Confederacy when the Confederate capital was Montgomery. In the Garden District, you can take a tour of the splendid Governor’s Mansion (1907). In the Court Square–Dexter Avenue Historic District, I stood on the exact spot where Rosa Parks said no and caught a refreshing breeze from the landmark Court Street Fountain. In the Lower Commerce Street Historic District, I found the tremendously curious casket on the roofline of the handsome Steiner-Lobman and Teague Hardware Buildings (1891). And when I had my fill of history, I simply appreciated the pure curb appeal of such buildings as the Kennedy-Sims House (1894) and the Sabel-Cantey House (1903).

One of Alabama’s oldest cities positively drips with Southern magnetism, and the best way to experience it is to stroll through its seven National Register Historic Districts. Magnolia and live oak trees form canopies over many streets. Lush foliage surrounds the lovely homes in the Oakleigh Garden Historic District. The De Tonti Square Historic District, named in honor of an Italian solider, explorer, and fur trader, covers 28 acres, while the Lower Dauphin Street Historic District encompasses 736 contributing buildings from the 1820s to the 20th century, including the 1891 Pincus Building, as well as the lovely Bienville Square Park, a perfect place to relax with a bag of roasted peanuts and try to imagine Theodore Roosevelt speaking here in 1905 about the importance of the Panama Canal to the port of Mobile. One of my favorites was the Church Street East Historic District, which features the impressive Cathedral Basilica of the Immaculate Conception (1850); the former Barton Academy (1839), Alabama’s first public school; and the fantastic Spanish Plaza Park, created with gorgeous benches in honor of Mobile’s sister city, Malaga, Spain. Throughout the city, I was particularly struck by the fine “iron lace” gracing many of the city’s homes, businesses, and squares, and the cast iron fountains, benches, and statuary. Although iron architecture fell out of favor here in the late 1800s, and urban renewal programs in the mid-1900s scrapped much of it, preservation movements have since rescued and restored enough of it to make it as vital, and as attractive, a part of the city as you expect in New Orleans or Charleston.

#4 Smell the Roses at Bellingrath Gardens and Home

With a population that never exceeded 7,000, Theodore, Alabama, just outside of Mobile, can easily be overlooked as a little-known backwater. But it lands on my list of favorites thanks to Bellingrath Gardens and Home, one of the top gardens in the country. Built by Walter Bellingrath, Mobile’s first Coca-Cola bottler, and his wife, Bessie, in 1935, the 15-room, 10,500-square-foot house has always been a tasteful combination of old and new. The exterior, for instance, with its flagstone terraces, balconies, and central courtyard, features handmade bricks salvaged from the 1852 birthplace of multi-millionaire socialite and suffragist Alva Vanderbilt as well as ironwork obtained from a hotel that had been recently demolished. The interior, however, achieved the epitome of modernity for its time — except for electricity, which hadn’t extended to this part of the county yet. I toured the mansion, with my guide pointing out the original kitchen appliances and a deep collection of silver, china, and crystal. But it’s the 65-acre gardens of this Southern estate, added to the National Register of Historic Places in 1982, that provide the most appeal. Astride the Fowl River, the grounds feature a gazebo garden, conservatory, live oak plaza, a tranquil lake, a bayou boardwalk, and an Asian garden. The gardens bloom all year long, from camellias and daffodils in February to the summer’s crepe myrtles and zinnias to the poinsettias and violas in December. Spring is definitely the highlight, and I timed it perfectly to explore the famed Rose Garden, with its 2,000 plants representing 75 varieties of yellow, red, pink, white, peach, and champagne roses.

#5 Confront a Checkered Past at the History Museum of Mobile 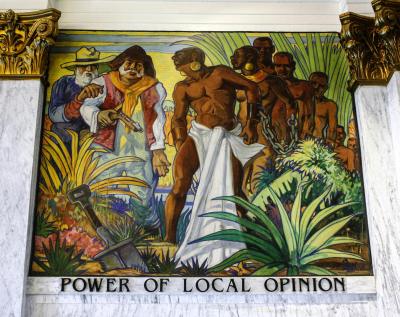 Housed in the handsome Southern Market / Old City Hall building from 1857, complete with white cupola, the History Museum of Mobile delivers 300 years of the city’s history, some of which is still difficult to reconcile. Upon entering the lobby, I first noticed the wonderful art by Mobile artist John Augustus Walker, who was awarded a WPA project in the 1930s to create colorful murals depicting education, slavery, and transportation, among others. Beginning with the city’s first inhabitants, the Native Americans, the museum traces the story of Mobile via 80,000 artifacts. Exhibits led me through the colonial era and the horrors of slavery—one simple display shows a line of pairs of feet, entirely too close together, representing the inhuman conditions found aboard a slave ship. A painting of the conflagration aboard the steamboat Eliza Battle on the Tombigbee River, which killed more than 30 people, recalls the early days of danger aboard these vessels (an explosion and fire aboard the Sultana on the Mississippi River in 1865 remains the deadliest maritime disaster in U.S. history — more than 1,700 people died in the fire or from drowning), and a full KKK outfit covering a mannequin gave me the creeps. Not all the exhibits are that distressing, of course. A display of horse-drawn carriages harkens back to a more genteel time of better manners (but messier streets), and a full and very lively exhibit on Mardi Gras corrected my error that the annual Carnival event originated in New Orleans: The Fat Tuesday celebration actually began in Mobile in 1703—15 years before its more famous party in The Big Easy.