Sometimes you just need a good laugh. Whether you’ve had a bad day or you’re stressed out from an apocalyptic pandemic wreaking havoc on every aspect of your life, a smile, a chuckle, or an extended fit of laughter is going to make you feel better. Even in the best of times, this will do you good with a beneficial rush of endorphins. As I travel around the world, I’ve stumbled upon so many things that elicited everything from a smile to an outright guffaw, whether it’s a very clever sign or a random item, and they’re almost always unexpected, which just makes them even more delightful. These are my favorites. 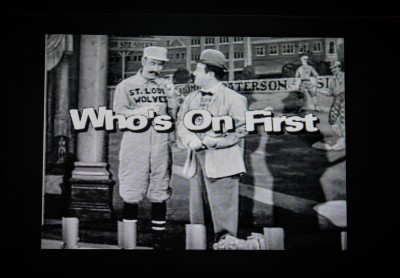 Legendary comedy duo Bud Abbott and Lou Costello introduced the world to their priceless “Who’s on First?” routine way back in 1938, when they performed it on radio, and it hasn’t lost a bit of its hilarity since. The premise of arguably the funniest comic sketch ever created revolves around a wacky baseball team managed by Abbott whose players have names like Who, What, I Don’t Know, Naturally, Tomorrow, and Because. When Costello asks him about it, Abbott tries to explain it, but as questions, prepositions, and adverbs become proper nouns, Costello becomes increasingly confused and Abbott progressively more frustrated by Costello’s lack of understanding of something that is so crystal clear to him. The uproarious play on words is so perfectly crafted, timed, and performed that, in 1999, Time named it the best comedy sketch of the 20th century. You can easily view it online, or catch it in the two Abbott and Costello movies from the 1940s in which they perform it: One Night in the Tropics, and the longer, more famous six-minute version, in The Naughty Nineties. But it’s funniest when you take a seat and watch its continuous loop in the National Baseball Hall of Fame and Museum in Cooperstown, New York. I didn’t know this was an exhibit here (although, in hindsight, it does make perfect sense), and after having spent several hours in this outstanding museum, I was certainly primed for it. As always, it delivered. Guaranteed, you’ll soon be hysterical, with tears in your eyes and your blood pressure immediately falling. Watch it multiple times for the full benefit and leave the museum in a noticeably better mood. 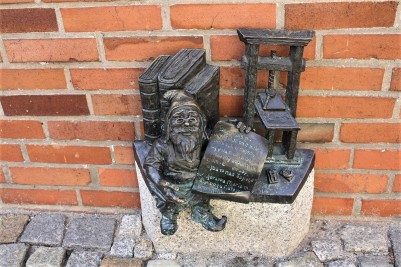 When you’re roaming around Wrocław, one of the most charming cities in Poland, you may never notice one of its most delightful attractions at all. They’re small, easy to miss, unobtrusive, and scattered around town. But once you find the first one, you’ll be obsessively hunting for them everywhere you look. More than 300 bronze dwarfs in various poses and costumes pop up in the most unexpected places, but be careful not to trip over them — most are on the ground, and they’re only about one foot high. What seems like a tourist gimmick actually had its start as a political statement. The dwarf was the official mascot of the Orange Alternative, a protest group that opposed Communist rule in Poland in the 1980s. When the group’s more overt tactics like putting up anti-regime slogans were covered up or removed by the police, the Orange Alternative resorted to painting graffiti dwarfs on the same spot, knowing authorities wouldn’t do anything about that because they’d look ridiculous by combating such silliness. After Communism fell in the 1990s, the Orange Alternative largely petered out, but a dwarf figurine was erected in 2001 to commemorate the movement. Since then, the number of these delightful little guys and gals has proliferated, sometimes as a solo figure, sometimes a pair, occasionally a little group. You can, of course, purchase a map that shows the location of each dwarf and plot your route while, for instance, enjoying a terrific dinner at Pod Fredra. I chose to find them on my own, however, never knowing when the next one would suddenly appear and bring a smile to my face. Full of personality, the dwarfs include one holding a little package (located outside a gift shop), one with a few books and a miniature printing press (outside the building where the first book in Poland was printed), a chap on a motorcycle, firemen with a hose and an ax, a ballerina outside the Opera House, and one chained to window bars in what was the old prison. My favorite is the tourist dwarf with a camera, looking down and taking a photo of an even smaller dwarf. 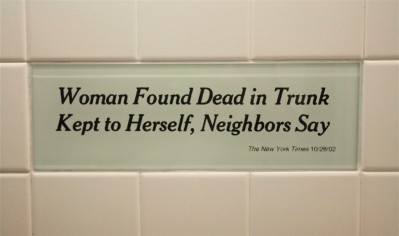 Unfortunately, the terrific Newseum closed on December 31, 2019, hopefully to reopen in a different location. The Newseum was a massive seven-level interactive museum dedicated to the history of journalism and communication, free expression, and the First Amendment to the United States Constitution. Outside, display cases featured that day’s front page from a paper from each of the 50 states. Inside, its exhibits included photojournalism, the history of news and reporting, levels of free press around the world, 300 historic front pages, and Pulitzer Prize–winning photographs, among so many others. Aside from the political cartoons and the comic strips, the museum wasn’t one for a rollicking good time — until I stepped into a restroom and laughed myself silly at the wall tiles containing actual headlines that could best be described as total and unintentional misfires: “Asteroid Nearly Misses Earth,” said The Washington Post in 2002; “Drunk gets nine months in violin case,” according to The Lethbridge Herald in 1976. My favorite was, “Woman Found Dead in Trunk Kept to Herself, Neighbors Say,” from The New York Times in 2002. Any museum that can poke fun at the industry to which it is dedicated deserves to reopen, and soon. 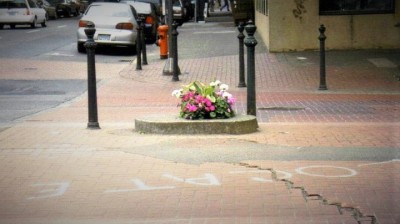 I’ve been to some fairly large urban parks, like London’s Hyde Park, New York’s Central Park, and Vancouver’s Stanley Park. Although they seem huge, Stanley Park, for instance, ranks only at #161 in the list of largest urban parks; the other two are well below that. As far as small urban parks go, however, I have been to the world’s smallest (although I haven’t actually been in it; it’s much too tiny). Circular Mill Ends Park measures just 23 inches in diameter in the median strip of SW Naito Parkway in Portland, Oregon. It’s an adorable little oddball attraction that you can easily pass by, but you’ll be happy if you do notice it. The story of the park is, itself, pretty entertaining as well. In 1948, when the intended use of the park’s site — a light pole — never came to fruition, Irish-American journalist Dick Fagan, whose office looked down on the weedy hole, cleaned it up, planted some flowers, and named it after his column, “Mill Ends” (a reference to irregular pieces of leftover wood at lumber mills). Urban legend holds that Fagan spotted a leprechaun digging in the hole and when he ran to him he asked the leprechaun for his own park; he granted Fagan’s wish by giving him the hole. In 1971, the Guinness Book of Records recognized it as the smallest park in the world, and it received official city park status in 1976. Since then, Mill Ends Park, with its one tree, has seen an ongoing arrival and departures of fresh attractions, including a swimming pool with a diving board for butterflies, a Ferris wheel, army men in a cheeky flash mob, and a park sign — all on a miniature scale.

#5 Nervous Scholar at the University of Otago (Dunedin, New Zealand) 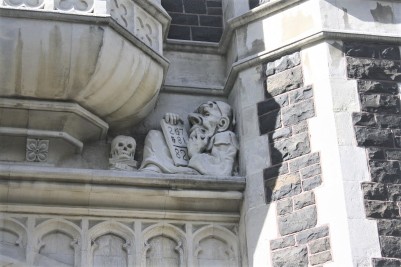 Opened in 1871 with just three professors (one for classics and English language and literature; one for mental and moral philosophy and political economy; and one for mathematics and natural philosophy), the University of Otago in Dunedin, New Zealand (a city that also has one of the world’s most beautiful train stations and one of its top 10 benches) has grown tremendously over the years. Its campus houses some gorgeous Gothic-style bluestone buildings with Oamaru stone facings. One of them, the Archway, built in 1914 as the formal entrance to the university, sports an ornamental feature that would make that third professor — and you — chuckle. While the architect stayed true to the style of the original Clocktower building when the designing the Archway, he also decided to have a little fun by adding a series of grotesques to the façade — decorative and fanciful human and animal forms, distorted to be ugly or absurd. The stonemason created eight small figures toward the top and two larger ones directly above the arch. While the one on the left is quite good — a scholar holding a globe and pointing to New Zealand, accompanied by an owl perched atop a lamp (both symbols of wisdom) — it’s the one on the right that gets the big laugh. A scholar with exaggerated ears and nostrils tucked into the corner and wearing a night cap also wears a very nervous expression on his face. Next to him, a skull (representing mortality) sits on a pile of books (symbols of learning, obviously; and one etched volume IV). But he’s more concerned with the task at hand. He holds a slate with a mathematical problem that he may or may not have gotten right. When he adds 247 and 581, he comes up with a sum of what could be the correct 828, but the right digit is obscured by his hand. Did he pass or fail? We’ll never know, and it’s this bit of architectural folly that will put a smile on your face.