The isthmus on which Auckland is located was settled way back in 1350, by the Māori people. Auckland itself didn’t really show up until the Europeans founded it in 1840. Although its term as the capital of New Zealand did not last very long, from 1841 to 1865, it has since grown into the economic and financial center of the country as well as its largest city, with a population hovering around 1.5 million. With an urban area of 234 square miles, there’s plenty of things to see and do. These are my favorites.

#1 Ascend to the Top of Sky Tower

At the base of the tallest freestanding structure in the Southern Hemisphere, I looked up at the brave, perhaps insane, person jumping off the top of Sky Tower, more than a thousand feet above me. Gliding down to earth on wires on a mercifully (for him) windless day, this daredevil clearly did not suffer from acrophobia. I quickly decided that the only method via which I would be returning to the ground from the top of this building would be the same one I was about to use to go up — the elevator. Auckland’s most iconic building reaches a height of 1,076’, making it one of the world’s 30 tallest towers, just a bit higher than the Eiffel Tower. Opened in 1997 as a telecommunications and observation tower, it offers the best views of the city and beyond. Traveling at just above 11 miles per hour, the elevator took about 40 seconds to lift me up to the tower’s highest observation level. As I circled around the Sky Deck, I was dazzled by the 360˚ views of up to nearly 50 miles. Below me, skyscrapers and low-rise buildings spread out for miles, giving way to hills and greenery. White yachts and sailboats berthed in the harbors and basins hinted at a leisurely, and affluent, citizenship, and ferries from busy wharves shuttled passengers across gulfs and inlets. I was able to spy a couple of the volcanoes that, thankfully, were remaining dormant — Auckland is the only city in the world built on a basaltic volcanic field, and about 50 volcanoes are within striking distance. For anyone without jelly legs, there’s that option of flinging yourself off the building and falling 53 stories (but it will cost you US$160 for an 11-second thrill), or you can put on a harness to walk along the four-foot-wide outdoor platform that circles the building. For a less adrenalin-producing way to see it all, you can grab a seat in the revolving restaurant and spend an hour over a meal while the building does all the moving for you.

#2 Be at Peace in Albert Park

One of Auckland’s great green lungs, Albert Park beckons everyone who wants to relax: office workers from neighboring skyscrapers on their lunch break, students between classes at the adjacent University of Auckland, visitors in search of tranquility. But it didn’t always serve such a peaceful purpose. During the mid-1800s, a military barracks occupied much of the current park’s area, and troops were stationed here until 1871. Ten years later, the park was constructed and has remained a favorite respite of locals and foreigners ever since. I entered the park via Gateway, a sculpture added to the park in 1990. Two columns of basalt boulders rise up precariously to a height of 59’ — but it’s misleading. The top half isn’t composed of basalt boulders at all; they’re aluminum replicas, insisted upon by structural engineers who cited the threat of seismic movements as a safety concern. As I strolled around, I found the adorably quaint original park keeper’s cottage, from 1882, and the ornamental fountain with cherubs riding dolphins and blowing horns that spout water. The open landscape affords views of Sky Tower and the frilly clock tower of the university. Throughout the park, beautiful flowers like birds-of-paradise and lavender, pink, and speckled white lupines erupt in beds of seductive colors. More than 80 species of trees provide plenty of shade, and the magnificent tree with low octopus-like branches unintentionally offers beds for limber college students. I appreciated the serenity of this place, especially with the knowledge that history could have turned out very differently: Underneath the park lie tunnels built in 1941 to serve as air raid shelters when World War II was reaching global proportions of darkness. 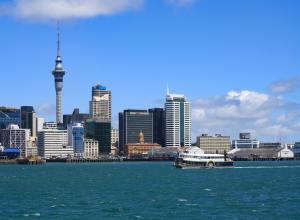 The easiest way to appreciate Auckland’s watery setting is to hop on a ferry, even if you don’t have a destination in mind. From the city’s iconic Ferry Building, I boarded one of seemingly dozens of ferries that traverse the harbors, inlets, bays, and gulfs in and around the city on their way to suburban areas and some of the nearby islands. You’ll soon be accompanied by a variety of vessels, from sailboats to paddle steamers, plying the water. And you’ll be rewarded with fantastic views of the city. Sky Tower dominates the skyline, but the low-rise red-brick and orange Ferry Building stands out as the only edifice with a pop of color. You’ll also get a better feel for greater Auckland, far from the city center and its modern structures. My ferry was headed to Devonport, a bayside suburb close enough to the heart of Auckland to make a daily commute feasible, but far away in vibe and character. With its village-like feel and population of under 4,000, Devonport is an alluring collection of shops, cafés, parish churches, and lovely homes. Breakfast at the friendly Stone Oven Bakery & Café fueled me for my climb up North Head, a hill honeycombed with fortified tunnels created during a Russian invasion scare in the 1870s. From the top, at 213’, I took in the remarkable views of the extinct volcano at Mt. Victoria as well as the entire skyline of Auckland. Although you could drive here from downtown Auckland in about 20 minutes, a ferry will bring you here in the same amount of time, and with a much more enjoyable ride. 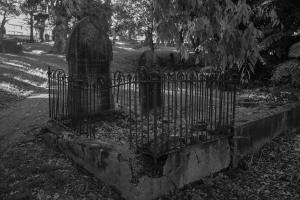 Like a setting for a zombie horror movie, Symonds Street Cemetery will give you the chills, even during the middle of a sunny day. Auckland’s oldest cemetery opened in 1842 with four separate sections for those of different faiths. Not long after, in 1886, the cemetery was closed to additional burials, except for those who already had existing plots. It looks as if no one has been buried since (the most recent date of death I found was 1908), and the cemetery is definitely showing its age. The terrain of this 14-acre burial ground lends itself to hills and gullies, filled with trees casting ominous shadows on the decaying tombstones and uplifting some of them with their powerful roots. Victims of weather, time, and neglect, many of the surviving tombstones have succumbed to cracking, moss, and the gradual fading of the names of those buried here. Rusty, twisted iron railing surrounding family plots, small piles of rubble that used to be headstones, and the dearth of gravesite flowers or wreaths create an eerie atmosphere. In the 1960s, the construction of a motorway next to the cemetery necessitated the removal and re-interment of more than 4,100 bodies. I wondered just how much their eternal slumber was interrupted during the construction, and I was soon on the lookout for irritated spirits who may still be wandering around. Very little time passed before I saw the ghost — and even less time for me to decide it was time to leave.

#5 Book a Room at Cordis, Auckland

Directly across the street from Symonds Street Cemetery, Cordis, Auckland (formerly the Langham) offers a different kind of resting place. This five-star upscale hotel, just a bit out of the city center and toward the top of a long hill, was my home for three nights, and I couldn’t have picked better accommodations. More than 400 rooms on 10 floors pamper you with dreamy beds, marble bathrooms, plush armchairs, and soft tones. The hotel’s Eight Restaurant features eight chefs preparing your international dishes, including American, Italian, Indian, and Chinese, while the Chandelier Lounge is the perfect place to sip a cocktail or enjoy high tea under the massive light fixture. And when you’ve expended all your energy downtown on a weekend, you can just take the hotel’s complementary shuttle bus back to your room or to the hotel’s wellness facilities, including the rooftop pool and the luxury spa.