I was lured to Estonia by the ease of a 90-minute ferry ride from Helsinki, across the Gulf of Finland. My original plan to spend one day in the medieval capital, Tallinn, was quickly extended. The more I read about it, the more fascinated I became, and the longer I stayed. But after three full days of crossing paths with innumerable tour groups speaking every language except Estonian, I was ready for something else.

I met my Reisi Ekspert guide, Martin, a few blocks from the Old Town, where Tallinn becomes less of a tourist bull’s-eye and native Estonians outnumber the few travelers who venture outside the historic town walls. 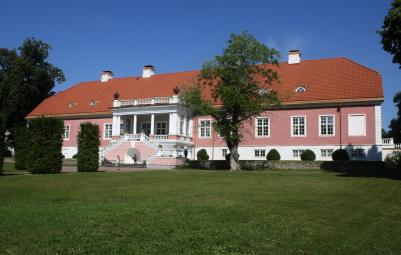 The cheerful Sagadi Manor is one of the best preserved in Estonia.

As we hopped in his vehicle, Martin was excited to learn that I was American. He had never been to the United States, but he was planning a trip the following summer to New York, Chicago, and…Detroit.

Surprised by the latter’s inclusion on his itinerary (although it’s one of my favorites, I didn’t think anyone else, much less a foreigner, would list it among their U.S. must-sees), I asked why he chose Motown.

“Sometimes I like to see things that are not as popular,” he explained.

I knew we’d get along well, and that was a good thing: We would be spending the next seven hours alone together in Lahemaa National Park, the largest national park in the country.

Martin was a 22-year-old social sciences major, enjoying his free education and working as a guide during the summer to fund his U.S. trip. Born in 1991, the same year that Estonia achieved its independence from the Soviet Union, Martin had no recollection of life under the communists. He was not of the generation suffocated by the Soviets, but rather of the entrepreneurial generation of Estonians that invented Skype.

Palmse Manor House and its commanding view of the formal gardens.

The Soviet influence still lingers uneasily, however, from the beautiful Alexander Nevsky Russian Orthodox Cathedral in Tallinn (which the Estonians always resented, as it was built on the most prominent hill in the Old Town) to the hideous Soviet housing development that Martin pointed out as we drove by — a large collection of dreary buildings constructed with built-in obsolescence as a mini-city for the laboring masses. Designed to last 50 years at most, their life expectancy had been surpassed, and a major housing crisis was developing: The residents who now owned those apartments were clamoring for dire repairs, not the proposed demolition.

All of that seemed worlds away as we entered Lahemaa, the country’s first national park, established in 1971. Indeed, it was the first national park created in the entire Soviet Union, when tiny Estonia was still a part of that ill-fated conglomeration. Lahemaa takes its name (“Land of Bays”) from the four major bays on its northern coast, a particularly unspoiled area — it was a closed border zone during the half-century of Soviet domination, set up to not only keep spies and subversives from coming in, but to prevent anyone from getting out.

Today, 70 percent of the park is covered by forests, peppered with bogs and beaches, the perfect home for the wolves, foxes, bears, and other wildlife that live there. Happily surrounded by little more than Martin and pines trees only about an hour east of the capital, I couldn’t have been farther from the serving wenches of Tallinn’s touristy medieval-themed restaurants and the blue Toomas the Train that shuttles lazy tourists around. 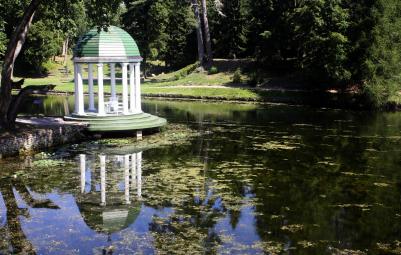 Palmse’s wealthy residents had their own lake for swimming and paddling.

The park is also home to a few of the spectacular manor houses that dot the Estonian map. In 1913, there were 1,245 manors in the country; today, only one-third of them survive, victims of war, political machinations, gradual deterioration stemming from the staggering cost of maintenance, and demolition by the Soviets who loathed the Baltic nobility, “the bloodsuckers of the peasantry.”

Martin took me to one of the most intact. Passing through the pink and white gatehouse of Sagadi, we strolled along the paths in the carefully manicured lawn, drawn to the neoclassical manor house of the same pink and white and featuring a steep red-tile roof. Dating from the 1790s, the manor was home to the nobility who threw sumptuous parties and definitely led the good life. On the manor’s grounds, 20 buildings have been adapted for contemporary use: The old livestock barn and stables are now a hotel; the storehouse and coach house are a forest museum; the brewery and dairy house are a nature school. The completeness of the manor has earned Sagadi national importance as an architectural monument.

“That was very impressive,” I said to Martin as we returned to his vehicle. “They certainly knew how to live. Not exactly the same experience for their servants, though.”

He agreed. “And, ultimately, like most of the nobility who owned these manors, they were disposed. But if you liked Sagadi, you will love the next one.”

He was right. Palmse is one of the grandest manors in the country. First mentioned in 1287, the original manor belonged to a nunnery and later came into the hands of a German family, who kept it for 250 years and gave it its current appearance in the 1780s. Years after they were disposed, Palmse received a complete restoration in the late 1900s. 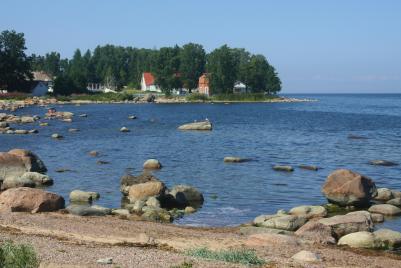 The tiny slow-paced town of Käsmu is the perfect retreat from bustling Tallinn and the majesty of the baronial manor houses.

The bright-yellow manor house, set against the perfectly blue sky and framed by green trees, was a joyful burst of color. Martin led me on a private tour through its rooms, including multiple drawing rooms and studies, the great hall, a large and fairly sophisticated kitchen for its time, and a cavernous wine cellar and cigar room. The expansive grounds — the pond, the pavilion and gazebo, the rose garden and the formal garden, the bathhouse — were clear indications of the privilege and wealth of the manor’s owners. But it wasn’t all for show. Palmse was a remarkably self-sufficient operation, with its own ice cellar, grange, ox stable, smithy, orangery, and malt barn.

A bit dazzled by the grandiose manors, Martin shifted gears for me when we made our final stop in Käsmu, a small coastal village within the boundary of the national park. With a population of about 130, Käsmu was the site of fish and salt smuggling for decades. The tranquility of this spot, where canoeing, sunbathing, and fishing rule, was a complete contrast to the buttoned-up decorum of the manor houses. It seemed an appropriate place to thank Martin for personally chauffeuring me around his country, and I commended him on his English skills. After nearly four days in this Baltic nation, I was mastering Estonian at the astounding pace of one word per day, whereas he had completely wowed me with his admirable fluency in English — six hours without a break to retire to his native language, and not one misstep along the way.

“It is a little tiring,” he confessed.

In addition to lessons in school, his grammar and vocabulary were informed by less academic supplements, and I was reminded of the depth and breadth of American culture when he told me what these sources were: His favorite band was Huey Lewis and the News, his favorite movie was The Breakfast Club, and he learned a great deal of English from watching Garfield — none of which were of his time.

More than 100,000 Estonians started singing for their independence at the Song Festival Grounds.

Back in Tallinn, we made an unscheduled stop so he could show me the spot that has made his promising life what it is rather than what his parents’ lives had been under hammer and sickle. Here at the nearly deserted Song Festival Grounds — really just a gently sloping hill with a partially covered stage built for 15,000 singers in 1959 — it was hard to imagine that day in 1988 when at least 100,000 Estonians gathered here to sing patriotic songs (a verboten act for decades) and launch their Singing Revolution, the precursor to independence. I know of no other nation that raised its voices in song rather than its arms in anger to achieve freedom. If only the rest of us were so wise.

2 thoughts on “My Own Private Estonia”