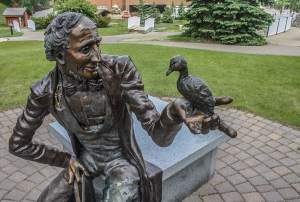 Beloved storyteller Andersen and one of his best-known characters.

I have long been fascinated by the Nordic countries. I don’t know why. I’m of Italian heritage, I grew up in a predominantly Jewish neighborhood, and I didn’t meet anyone of Nordic lineage until I was 23, when a friend of mine married a woman who was half Finnish. Nevertheless, Sweden was the first country I ever wanted to visit (that didn’t happen; it came much later), and the entire region has captivated me for decades: the bizarre Icelandic landscapes, dramatic Norwegian fjords, LEGO, The Scream, Finnish chocolate, Vikings, Babette’s Feast, tiny meatballs, Tivoli Gardens, havarti cheese, the restored wreck of the Vasa, the incredibly beautiful Swedish Princess Madeleine—the list is endless. 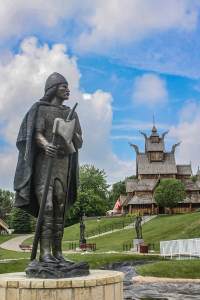 It was this mania that brought me to Denmark in 2001, Iceland and Sweden in 2006, Norway in 2011, and Finland in 2013. Closer to home, I often drop in at the Scandinavia House in Manhattan for their exhibits, wonderful café, and irresistible little gift shop, where, if I’m lucky, their stock of Karl Fazer chocolate bars hasn’t sold out. And the annual Norwegian Day Parade in the Bay Ridge section of Brooklyn is still going strong, ever since 1952.

In the United States, if you really want to immerse yourself in the culture of these five countries, head to the Midwest. At the height of their immigration wave, more than two million people came to America (with Norway surrendering a greater percentage of its population than any other country besides Ireland), many of them settling in the central states. Here, I visited the wonderful Museum of Danish America in Elk Horn, Iowa, and spent a full, fun day at the Swedish Honoring Festival in Lindsborg, Kansas.

When I found out about the Scandinavian Heritage Park in Minot, North Dakota, a two-hour drive from where I was staying in Bismarck, I knew I had to go. And when I learned it’s located in the Brooklyn Heights neighborhood of town (the exact same name of the neighborhood where I live in New York), I realized that fate, rather than free will, was going to take me there. A whopping 36% of North Dakotans claim Nordic ancestry—more than any other state. (By contrast, Louisiana and Mississippi register only 0.6% each.) Established in 1990, the park celebrates their heritage and contributions to the world at large. 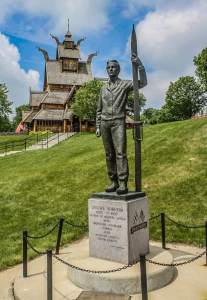 The father of one the Olympics’ most exciting events.

The excitement built as soon as I reached my destination, parked, and saw the stave church, peeking over a few treetops. But, first, I indulged my inner cartographer by stepping up to a circular map 75’ in diameter at the heart of Plaza Scandinavia. Completed in 2011, the map of the five countries features each in different-colored granite tiles surrounded by a sea of Norwegian blue pearl granite. Bronze discs indicate the countries’ capitals: Copenhagen, Helsinki, Oslo, Reykjavik, and Stockholm. Next to the map, the flags of the five countries are raised in their unified designs, all with the same cross, all employing some combination of red, white, and/or blue (with Sweden being the outlier, throwing in some yellow).

From there, I arbitrarily chose paths that wound around the grassy 14-acre park and across the little bridges that span the rippling streams and ponds, past the waterfall that tosses 600 gallons over its edge every minute during the summer and the picnic tables that invite you to share a meal of Swedish meatballs, lingonberries, and some Danish butter cookies. Along the way, I was charmed by the bronze statue of Hans Christian Andersen, the Danish fairy tale writer, poet, novelist, and playwright. The seated Andersen holds a book in one hand while the other palms a not-so-ugly duckling that Andersen seems delighted with. 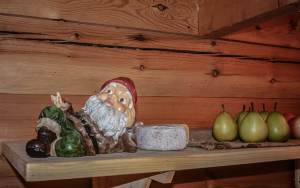 Another bronze statue, of another equally famous figure, stands with a mighty ax in his hand. The long-haired and mustached Icelander Leif Erikson wears a helmet, chainmail, cloak, and leather boots. Erikson was born in Iceland to a Norwegian father (the illustrious Erik the Red), lived in Greenland for a bit, and became forever famous for being the first European to step on North American soil, in what is today Newfoundland, Canada, in 1000.

A less fearsome figure stands nearby. The Norwegian Sondre Norheim, the father of modern skiing, who died in 1897 in North Dakota, is memorialized here, recognized for transforming skiing from a utilitarian mode of transportation to a recreational sport. Norheim gets a second nod with the Sondre Norheim Eternal Flame, designed by a Minot artist. Five aluminum skis, symbolic of the five Nordic countries, tilt inward to support a globe and represent Norheim’s contributions to developing and popularizing the sport. But let’s not forget the importance of that original practical purpose of just getting around: Norwegian and Finnish ski troops relied on these long, narrow boards to battle invading Nazis and Soviets during World War II, most dramatically when the Norwegians successfully sabotaged a plant in their occupied country that was being used by the Nazis to develop atomic weapons. You’ll want to read Assault in Norway by Thomas Gallagher for the can’t-put-it-down story of this thrilling achievement. 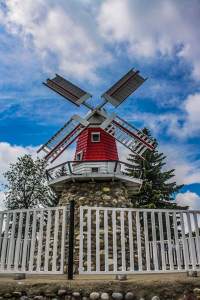 The iconic image of the Danish windmill.

Norheim’s efforts paved the way to fame for his fellow countryman, long-time Minot resident and ski jumper Casper Oimoen, whose statue stands near Norheim’s. Oimoen was a member of the U.S. Olympic ski team in 1932 and its captain in 1936. Although he came home medal-less both times, Oimoen won more than 400 medals and trophies during his career, including buckets of them in national, regional, and state championships.

An enchanting two-story wood building with some intricate details lured me up its steps and inside. This stabbur, a Norwegian food storehouse, is a 1990 replica of one built on a farm in Norway in 1775. Raised above the ground on stilts to prevent water and rodents from destroying its contents, the stabbur traditionally stored clothing and valuables on the upper floor, while the lower level held meat and cheese that hung from the ceiling. Norwegian folklore holds that each farmstead has a Christmas gnome living in its stabbur, a happy little creature who brings gifts for well-behaved children on Christmas (but who plays tricks on people if he’s not tended to). I was delighted to see a reclining gnome on a shelf here, leaning against a wheel of cheese and some tempting-looking pears and apples beside it.

Then I stepped into a smaller wooden cabin with a fenced front porch and a stained-glass window with the Finnish flag. It’s a sauna, one of Finland’s great contributions to resting, relaxing, sweating, and socializing. It’s noted that there are more private saunas in Finland than people. Nearby, atop a stone and concrete base, stands a delightful red and white Danish windmill, built in 1928 for the Olson family to supply water and grind wheat in Power Lake, about 80 miles away. 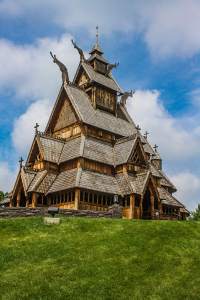 The gorgeous stave church is an architectural wonder.

The most substantial building in the park is the gorgeous full-size replica of the stave church in the Norwegian municipality of Gol, built in 1250 and moved to Oslo’s outdoor Norwegian Folk Museum about 100 years ago. This church, dedicated in 2000, measures about 60’ by 45’, and rises to a height of approximately 60’. The painstaking carvings impressed me, and I was floored by the craftsmanship of the countless gables, dramatically sloped roofs, covered arcade that wraps around the entire structure, and the crosses and dragon heads rising from the roof peaks. Through its pine portals, I entered this house of worship. The inside is simple yet complex, especially when you examine its construction and its assigned symbolism. The four corner posts represent the four gospels. Beams upon which a dozen columns (each topped by the face of an Apostle) rest signify the Apostles and the foundation of Christianity. The fish-scale roof that protects worshippers from snow and inclement weather also stands for those standing underneath it, whose prayers protect Christians from temptation. Floorboards allude to those who bow in honor—the more they are exposed to the trampling feet of the congregants, the more support they provide. The beautifully carved baptismal font, made entirely of wood, stands below the carved 8’-wide wall relief of the Last Supper, with Jesus breaking a loaf of bread to His group of rather stern and not-so-Middle-Eastern-looking followers. 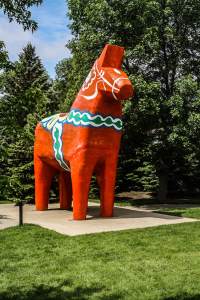 The cheerful Dala horse will bring out your inner child.

From the solemnity of the church, I shifted gears to the joy of the Dala horse facing it. Originating in the Swedish province of Dalarna, these traditionally wooden hand-carved and -painted horses were made because people needed something to do to break up their boredom. After laboring all day in the early 1800s, these Swedes didn’t have many options for entertainment, so they used wood scraps from local industries to make these toys. Since then, they’ve become a symbol of Sweden, and this 30’ version I was looking at now made me feel like a little kid again. Painted a bright red, with blue, green, white, and yellow trim, and a white tail, this guy stands in the middle of one of the pathways, so just for fun, you can stoop over a bit and pass through his legs and beneath his belly.

Believed to be the only park in the world representing all five Nordic countries, the Scandinavian Heritage Park is the perfect place to launch your introduction to this quintet or to heighten your appreciation of everything they’ve given us, from Ingrid Bergman to the word geyser.