I arrived in the Old Louisville Historic District with the intention of exploring one of the top five historic districts in the United States for about an hour. After a stop at the visitors center and armed with a map of the district, I began to explore one of the most unexpectedly pleasurable urban walks I have ever experienced.

The Ewing Eaches House has one of the most welcoming entrances in the historic district.

Despite the inaccuracy of the district’s moniker (it was developed as a suburb of the already extant Louisville), these 48 city blocks are, indeed, old, chock-full of more than one thousand structures built from about 1850 to 1920 for the city’s upper stratum — tobacco, racetrack, and bourbon barons among them. But it’s not just a neighborhood of mansions for the ultra-wealthy; scattered around the sumptuous homes I came across low-rise apartment buildings, churches, row houses, and carriage houses.

Home after home, style after style — Beaux Arts, Craftsman, Gothic Revival, Italianate, Queen Anne, Richardsonian Romanesque, Second Empire, Venetian — these residences immediately made me want to consult real estate listings for the neighborhood and move here. The eclectic ensemble of styles keeps the district visually stimulating, and the homeowners clearly keep it in tiptop shape, whether they’ve maintained the buildings as private homes or converted them to offices or bed and breakfasts.

While taking in the district as a whole is rewarding, I found it terrifically fun to hunt for plenty of exuberant flourishes in the details: acanthus leaves, for instance, or a harness-racing weathervane, stone swags or serpents or swans. Big or small, each building has something unique to offer, from inviting front porches to creative rooflines.

The uncommon double stairway at the William Wathen House.

The Bishop’s Hat House, for instance, was built in the mid-1890s for an insurance agent and features its signature mitre-inspired parapet, lovely round tower, Corinthian capitals, and a secret: The third floor is the home of the Old Louisville Candy Kitchen, purveyor of chocolate-bourbon-pecan balls.

A smiling mustachioed face, nestled in a swag between a couple of scrolls, adorns the façade of the Bennett Young House, named for a Confederate calvary member turned European-trained lawyer. Lamp manufacturer Frank Lampton lived in a castle-like home with engraved masonry, a circular turret, and limestone trim. The Gilmer Speed Adams House sports a Palladian window, ornamental pillars, and a stint as the chapter house for the local Red Cross.

The yellow-brick Ewing Eaches House boasts an intricate art-glass canopy at the front doors, while the entrance to the grand Bernheim Mansion is protected by a trio of arches embellished with foliate masks.

The Pink Palace keeps an eye on its end of St. James Court.

One of the structures that particularly captured my attention was the William Wathen House, built for a prosperous jeweler in 1896. This Châteauesque mansion is a visual feast, with its roofline pinnacles and spires, abundant terra cotta details, and curved limestone double staircase leading to double entrance doors fitted with leaded glass.

Lavish Ferguson Mansion is one of the most substantial buildings in the district. Built for a cottonseed-oil businessman around 1905, the house remained in his possession only until 1924, after he had been forced out of his own business in 1907. The Parisian-inspired mansion morphed into a funeral parlor for 50 years before becoming the home of a historical society that invites visitors into the ground-floor public rooms.

I saved the best section of Old Louisville for last by entering Belgravia Court, one of the embowered courts gracing the district. Heavy with trees, bordered by Victorian homes, and illuminated at night by gas lights, Belgravia Court was developed in the early 1890s as Louisville’s first “walking court.” It feels like a tight-knit neighborhood within an already tight-knit neighborhood where time stood still, and I could imagine neighbors strolling the short stretch in all their finery from a hundred years ago.

The Ferguson Mansion is one of the most elaborate houses in Old Louisville.

Exiting the court, I was greeted by the fairy-tale Pink Palace (1891), a seven-bedroom home that was originally the Gentleman’s Club and Casino, where the neighborhood’s upper-crust men would gather for alcohol, gambling, tobacco, and, every now and then, a female visitor who came with an hourly price tag — quite a difference from the building’s next owner, the Women’s Christian Temperance Union, which painted the façade pink to wash away reminders of its less chaste predecessors. Now a private residence, the Pink Palace has been the home of two Louisville mayors, a farm machinery and equipment manufacturer, and the inventor of an early hearing device. Throughout it all, the palace has retained its elegance, its tall witch’s hat roof, and its commanding presence at the head of St. James Court, the most charming street in the entire district. 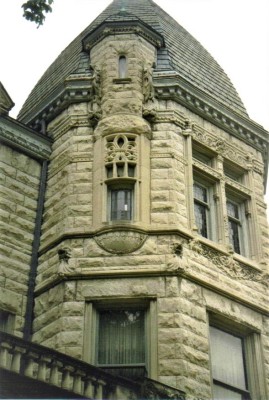 Hunt for masonry details on the facade of the Conrad-Caldwell House.

With a lion resting on a stone base at either end, St. James Court epitomizes the gentility of this 1,200-acre district. A wide, grassy meridian with lampposts and a fountain (a replica of the 1892 original) guarded by a circular wrought-iron fence centers the refined tree-lined street. Some of the district’s most impressive houses flank the court, anchored at its southern end by Central Park and the castle-like Conrad-Caldwell House. This Richardsonian Romanesque limestone pile was completed in 1895 with such neoteric inventions as electric lighting and indoor plumbing for a tannery owner, who lived here for only 10 years, until the time of his death. Since then, the house has been occupied by a wooden and steel tank manufacturer, the Presbyterian Church, a home for elderly women, and, since 1987, a museum. With its heavy arches and columns at the entrance, towers and fleurs-de-lis, carvings of animals and gargoyles, intricate foliation, and wide variety of fenestration, “Conrad’s Castle” is a masonry masterpiece. Step inside for the tour and you’ll be awed by outstanding stained-glass windows, parquet floors, and spectacular woodwork, crafted from seven different types of wood.

As I made my way back to the visitors center to pick up a souvenir tee-shirt I had spied there when I first stopped in, I marveled at how this gracious district had once been undeveloped nature, where folks in Louisville used to come to hunt birds and deer. And it was hard to imagine that the first homes constructed in this bucolic setting were “country houses” for the wealthy in downtown Louisville, literally within walking distance a few blocks away.

That friendliness I had found so pervasive resurfaced when I returned to the visitors center — four hours later, a three-hour extension of the time I had planned to spend in Old Louisville that disrupted my plans for the rest of the day in the best way imaginable. The lady working at the center didn’t have the exact change to give to me for the tee-shirt, so she told me to take it for free. Of course, I did not, but it was refreshing to see that some of the manners and courtesy one would expect from a century ago in a Victorian Era setting still survive today.