Banff used to be called Siding 29 by the Canadian Pacific Railway. Its current names derives from Banffshire, Scotland, birthplace of the CPR’s major financiers — clearly the more attractive choice, especially for such an astonishingly photogenic town. 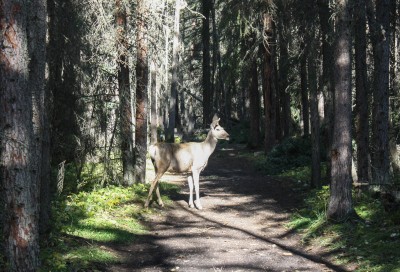 You never know who you will meet within the city limits of Banff.

Attractive low-rise buildings housing shops and restaurants line Banff Avenue, the touristy main strip, with the imposing Cascade Mountain, rising 9,800 feet before you, watching over all of it. As I made my way past streets with names like Bighorn, Moose, Muskrat, Beaver, Otter, and Lynx, I knew I was ever so close to the biota all around me.

The northern part of the town abuts the twisty Bow River. I turned right onto the Bow River Trail, and only two minutes into my hike, a timid deer emerged from the trees onto the trail right ahead of me. We stared at each other motionless for a while — me in admiration, the deer in evaluation of my potential threat to its life — until a couple arriving from the opposite direction broke the silence and it loped off.

On my way back, I collided with a 10K marathon with about 3,000 runners who were using the trail. I cooled my jets by perching on a bench amid flawless scenery, enjoying the towering mountains and the flow of the river that carried a couple of leisurely canoeists. While I waited, an occasional freight train with dozens of brightly painted carriages flew by, sending flashes of color through the evergreens. 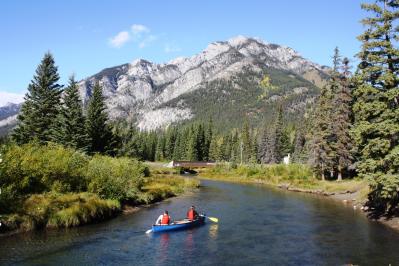 Glorious scenery is a perfect backdrop for a little canoe trip.

Once most of the runners had trotted by, I continued on my way along the river for the remaining mile of the trail. The trail bifurcates here to the Banff Pedestrian Bridge, but I continued along the north bank of the river, the elevation increasing gently until it rises to its terminus at the intersection with Buffalo Street. I walked along the shoulder of the road until I reached a semicircular turnout, Banff Surprise Corner. The road wraps around a little chunk of bosky land with staircases up to tiered viewing platforms that feature a series of informational boards and boasts prime viewing points for the gorgeous Banff Springs Hotel across the river. I had already viewed the hotel, built in 1888 as the world’s largest, from atop the 7,486-foot Sulphur Mountain via the Banff Gondola (one of the world’s top five aerial tramways), where it looked like a single LEGO block. From this vantage point, however, the hotel takes on a more human, albeit still grand, scale, and I could better appreciate why its founders positioned it exactly there. 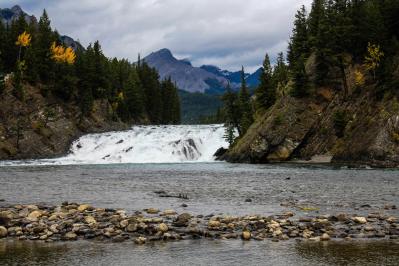 Bow Falls makes an idyllic spot for a picnic lunch.

Even though I was blessed with a beautifully sunny, crisp autumn day, the fierce wind at this higher elevation made it difficult to keep my balance and not become like the cartoon man on the caution signs everywhere as he tumbles off the trail down to his inevitable death, or at least two dozen broken bones. So, instead of continuing on the Hoodoos Trail, which begins its nearly three-mile course from Banff Surprise Corner to the campgrounds at the northern fringes of the town, I backtracked to the pedestrian bridge. Midway across, I stopped to marvel at the unobstructed views of the river and the mountains surrounding me, with plenty of open sky in between. I picked up the Bow Falls Trail on the opposite side and continued along the southern banks of the river to Bow Falls, my final destination, less than a mile away.

At the confluence of the Bow and Spray rivers, the falls — small but powerful — attract a good number of visitors, thanks to its easy access and convenience. Only about 30 feet high but 130 feet wide, the falls tumble over rough bedrock, producing a dramatically turbulent hiccup in the Bow River in an otherwise utterly placid and memorable setting — the perfect place to sit for a while, unpack my backpack, and enjoy a picnic lunch, all practically within shouting distance of town.