It’s easy to lose yourself in the outstanding museums in Washington, D.C., or to shuttle from one impressive monument to the next. But it’s also nice to stroll around this charming low-rise city, where wide streets, handsome homes, and pocket parks encourage you to be a pedestrian. That also provides a terrific opportunity to stumble upon some of the city’s most remarkable churches and explore their impressive architecture, artwork, and history. These are my favorites.

#1 Basilica of the National Shrine of the Immaculate Conception

The only institution of higher education founded by U.S. bishops is also home to the most beautiful church in the capital of the United States (and the largest Roman Catholic church in North America) — the Basilica of the National Shrine of the Immaculate Conception. The massive building dominates the campus of Catholic University, easily recognized by its soaring campanile that tops out at more than 300 feet, blue and yellow mosaic tiled dome with a diameter of 108 feet, and towering recessed arch over the main entrance. The Romanesque-Byzantine basilica required 39 years of construction until it was finally completed in 1959. I started my visit with a stroll around the crypt level, with a low vaulted ceiling over the Memorial Hall and altar, fashioned after early Christian catacombs, and a couple dozen chapels dedicated to the likes of Our Lady of Hungary, Our Lady of La Vang, Our Mother of Africa, and Our Lady of Bistrica. In the Upper Church, the world’s largest collection of contemporary ecclesiastical art dazzled me wherever it appeared — in the gold domes, gorgeous mosaics, side chapels, and rows of marble columns. With a seating capacity of about 3,500, this tremendous basilica welcomes more than one million visitors per year, and I’m sure they’re all as impressed as I was.

Officially and verbosely dedicated as the Cathedral Church of Saint Peter and Saint Paul in the City and Diocese of Washington, the National Cathedral looks like it was dropped in the U.S. capital from a European city hundreds of years ago. But looks can be deceiving: This cathedral is fairly new. Although the foundation stone was laid by President Theodore Roosevelt in 1907, construction and decoration of this Gothic Episcopal cathedral ended only in 1990. That’s nearly a century to create the sixth-largest cathedral in the world, replete with pointed arches, flying buttresses, boss stones, ribbed vaulting, gargoyles, three soaring towers, and a nave that extends for one-tenth of a mile. The cathedral has witnessed the funeral services of U.S. presidents Eisenhower, Ford, and Reagan as well as memorial services for Eleanor Roosevelt and Nelson Mandela. While a Mass was in session, I headed downstairs to the quiet, reflective crypt, deliberately designed in architectural styles that predate the Gothic style used above it — a common convention found in the European cathedrals that this one so resembles. Once the service ended, I returned to the main level and began to marvel at the 200 vibrant stained-glass windows — some religious (St. Stephen being stoned; Adam and Eve being evicted from the Garden of Eden), some secular (West Point; symbols of Maryland) — as well as the “Creation” rose window, with more than 10,000 pieces of colored glass. Fine statues of everyone from St. Peter to Abraham Lincoln stand throughout the cathedral, but the greatest concentration can be found on the amazing reredos —110 figures of saints, angels, and six anonymous figures, all surrounding a Texas limestone sculpture of Christ that took two years to complete. Not everything here is as hard as stone and marble, however: A series of David and Goliath tapestries relates the tale of the giant and his slayer, and the Children’s Chapel, popular for baptisms, has adorable patterns of baby animals stitched into the kneeler cushions.

#3 Cathedral of St. Matthew the Apostle 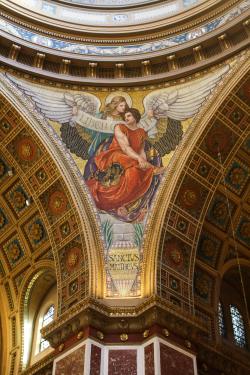 Both Pope John Paul II and Pope Francis must have been impressed by the Cathedral of Saint Matthew the Apostle (the patron saint of civil servants) when they made their visits. Completed in 1873, the exterior presents an unassuming brick and sandstone façade, with a handsome dome. At 155’ long and 136’ wide, it’s pretty big, and the dome rises 190’. Capable of holding 1,000 persons, I’m sure it was jam-packed when JFK’s funeral mass was held here in 1963. The interior is glorious, filled with columns, marble, alabaster windows, ceramic Stations of the Cross overlaid with gold leaf that were a gift from Napoleon’s grandnephew, gorgeous light fixtures, and perfectly executed murals. Especially noteworthy are the mosaics, particularly those of St. Francis preaching to birds and fish in the Chapel of St. Anthony of Padua, the four evangelists decorating the pendentives under the dome, and the one of St. Matthew above the altar that’s 35 feet high and 13 feet wide. One of the cathedral’s most striking features is also one of its newest: In Our Lady’s Chapel, a statue of Mary sculpted in 1984 reaches down to fallen humanity and points upward to a starry sky and eternal salvation.

Pope Francis also called at St. Patrick’s Catholic Church, the first church to be built in Washington, D.C. outside of Georgetown, established to serve the Irish immigrants who came to the city to labor on federal building projects. The current building — the third incarnation — was completed in 1884 in the Victorian Gothic style and presents a mighty sturdy exterior of course blocks of blue-gray gneiss, trimmed with buff-colored sandstone and polished rose and gray granite. Stepping inside, two genuflecting angels holding seashells filled with holy water greeted me as I began to proceed down the central aisle toward the simple altar. I found the church’s best features along the side aisles: the statue of St. Patrick fronted by three rows of flickering green candles; the beautiful stained-glass windows, particularly the one depicting the Last Supper with a very pronounced alienated Judas; and a somber pietà. High above them all, the 2,600-pipe organ overlooks the entire church, proud to be a descendant of the original organ, the first organ in any church in the Federal City, installed in 1815. 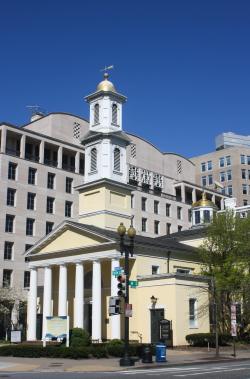 Not as grand as any of the above churches, St. John’s Church has been visited at least once by every U.S. president since James Madison, including Abraham Lincoln, who would arrive for services a bit late, sit in the last pew, and leave a bit early to walk back through Lafayette Park across the street to the White House, even throughout the Civil War. Consecrated in 1816, the yellow Greek Revival Episcopal church, with its six Doric columns supporting an unadorned pediment, sports a steeple that contains a 1,000-pound bell cast by Paul Revere’s son. Many of the stained-glass windows, imported from France and installed more than 100 years ago, are at eye level, allowing close-up views of Jesus entering Jerusalem on Palm Sunday, the Wedding of Cana, and other scenes from the life of Christ and from the Gospel of St. John, the church’s namesake. But just when I thought what a cozy, intimate little church this was, I stumbled upon the urban legend that whenever the bell tolls to acknowledge the death of a person of note, half a dozen spectral men in white robes appear in the President’s Pew at midnight and then disappear.