Technically not a color, as it contains all wavelengths of visible light, white is often overlooked, relegated to just a blank spot devoid of any color at all or an unmarred tabula rasa. But look again: From the snows of Kilimanjaro (which are, sadly, disappearing, thanks to indisputable climate change) to Dover’s cliffs, from adorable harp seal pups to a blank Microsoft Word document that could lead to the next great American novel, white can be not only the start of something, but also the main attraction in and of itself. These are my favorites.

I first became fascinated by alabaster while wandering around Orvieto Cathedral in Italy, a bit gobsmacked by its beauty. I was ultimately drawn to the curious aisle windows — stained glass on top, but veined, amber-colored alabaster on the bottom. This translucent material projected a certain amount of golden light onto the floor, yet blocked enough sunlight to keep the cathedral cool during the hot summer. From Assyrian reliefs to perfume jars in King Tut’s tomb, from altarpieces in European cathedrals to objets d’art for your living room, alabaster has been beautifying our lives for centuries. To learn more, a trip to nearby Volterra, famed for its alabaster industry that has been thriving since the eighth century BC, seemed necessary. I was completely captivated by the prevalence of the material in this hilltop Tuscan town, from parts of Volterra Cathedral to the collection in Palazzo Viti. Artisans in their workshops throughout the town invited me to watch as they excelled at their métier, creating everything from classical figurines to decorative eggs to jewelry boxes. Its inherent pliability makes alabaster a desirous material for carving and sculpting, and its porousness facilitates a dying process that results in perfectly realistic colors — alabaster apples dyed red, for instance, or lemons dyed yellow will defy you to differentiate them from the real fruits. Yet it’s the pure-white alabaster that really highlights its beauty and versatility, and especially its transfixing luminosity when lit from behind or within, as with the lampshade or candle holder that you will inevitably purchase. 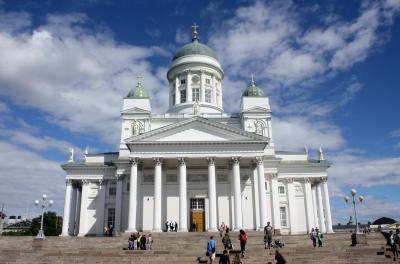 Atop an exceptionally broad staircase of nearly four dozen steep steps in Senate Square, Helsinki Cathedral towers over its neighbors, making a particularly impressive site when viewed from a boat sailing into one of the nearby harbors. Completed in 1852 as a tribute to Tsar Nicholas I of Russia, the grand duke of Finland, it was known as St. Nicholas’ Church until Finland achieved independence in 1917. With the exception of its doors and its green roofs and domes topped with gold crosses, the entire structure is white. And that means it easily adopts different moods and vibes depending on the time of day or year. During sunny summer days, the columns, pediments, statues, and towers of this neoclassical Lutheran church stand blindingly bright against a blue sky; at night, lights bathe the effulgent structure against a cobalt sky like a welcoming beacon. In winter, it’s like an enticingly mysterious ice castle. Inside, white reigns supreme, too. Designed in a Greek cross plan, symmetrical in each direction, the cathedral is sparsely decorated. With a few exceptions, like the organ and the wood pews, you’re surrounded by white — keeping you cool in the summer but always reminding you of cold Finnish winters. The cathedral seats 1,300 people, so I found it astonishingly lucky to be the only person there, save for a few transient stragglers just popping in for a look, for a 30-minute organ concert, surrounded by the purity of white. 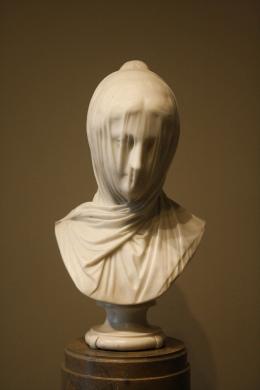 In a city filled with grand, white structures and monuments, from the Jefferson Memorial to the aptly named White House, it’s easy to get lost among the bigger displays of white. But I found a smaller, and utterly astounding, one proudly displayed in the outstanding National Gallery of Art. The Veiled Nun, a 21-inch-tall marble bust, completely mesmerized me, leaving me to wonder how on earth marble could be sculpted so delicately and finely to make it appear transparent. The veil covering the woman’s head is see-through, revealing the woman’s hair and contours of her face yet still disguising her true expression. How anyone can create something so diaphanous from something so solid mystified me — and so did the story of this sculpture itself. The secrets just kept coming. For starters, the woman depicted is not a nun at all. Her embroidered veil and fashionable hairdo would be uncharacteristic of a nun, and the name developed not from the artist but from museumgoers who interpreted her inward focus and demure modesty as that of a holy figure, and their reference to her as a nun stuck. Created in 1860 by Italian artist Giuseppe Croff and purchased in Rome in 1863 by an American banker for $300 who then donated it to a museum, The Veiled Nun became even more mysterious by 2012. Based on its similarities to an engraving of a veiled bust, also attributed to Croff, that was exhibited at the 1853–54 New York World’s Fair, The Veiled Nun had always been thought to be his tour de force. But scholars impugned its origins when they agreed that differences from the engraving, combined with the proliferation of veiled busts at that time, made it highly unlikely that Croff was the sculptor. Today, it remains attributed to an unidentified Italian workshop, and that’s a shame — the fledged person who created such a masterly paradigm of sculpture deserves to be recognized.

Montana may be called Big Sky Country, but the sky in South Dakota is pretty extensive itself, and you don’t have to be in the rural countryside to enjoy it and the magnificent clouds that grace it at any given moment. Clouds have always appealed to me, whether as a child, imagining that they looked like Big Bird, a map of Florida, or pieces of popcorn, or as an adult, appreciating their magnificence during a brilliant sunset or watching threatening ones build into a thunderstorm. In South Dakota, I witnessed clouds unlike any others I’ve ever seen. Somehow, they appeared more cottony and animated — and certainly whiter — than anywhere else. Whether I was hiking in Badlands National Park or driving between ghost towns in sparsely populated areas in the western part of the state, strolling around downtown Pierre or exploring the waterfalls in Sioux Falls, these fugacious, morphing, visible masses of condensed water vapor were my ever-present companions. All I had to do to appreciate them was stop and look up. 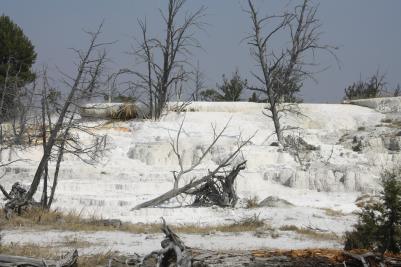 Yellowstone National Park is, by far, the most diverse national park I’ve ever visited. From natural formations to wildlife, this park teems with unique highlights, worthy of a solid week of exploration. One of the top five things to see in Wyoming, the park boasts West Thumb Geyser Basin, one of the world’s top five natural curiosities, as well as one of the world’s top five drives. One of the best examples of white is here, too: Mammoth Hot Springs. This complex of hot springs on a hill of travertine, a type of limestone deposited by mineral springs, was formed over millennia as hot spring water cooled and deposited calcium carbonate. Viewing the sheer whiteness of these formations, particularly the terraces that resemble frozen waterfalls, may require sunglasses on a sunny day. Among these natural sculptures, which reminded me of underground caves and caverns suddenly turned inside out and exposed to the world, Terrace Mountain stands as the largest carbonate-depositing spring in the world, and Minerva Terrace suddenly (geologically speaking) went dry when earthquake activity shifted the spring vent away from it. Although commercialized early on for folks in search of relief from various physical ailments in the healthful mineral waters, Mammoth Hot Springs today is favored by nature lovers, geologists, and photographers who appreciate the nothingness and the everything of white.