The Royal Mile in Edinburgh’s Old Town draws significant numbers of visitors here every year, and with good reason. Starting at the lower end at Holyrood Palace, this historic stretch is crammed with many of the city’s highlights, eventually terminating at Edinburgh Castle, sitting atop an extinct volcano. From here, I could see the entire city, including the spires and towers of its most beautiful churches, several of which I just passed on my uphill climb here. These are my favorites.

One of those churches on the Royal Mile began in 854, although after centuries of destruction and reconstruction, the present structure dates from 1485. Named for the patron saint of the city, who was wounded by a hunter and, following his death in the eighth century, had hospitals and safe houses for beggars, cripples, and lepers dedicated to him, St. Giles’ Cathedral, or the High Kirk of Edinburgh, faces an open cobblestone square. Standing smack in its middle, I had an unobstructed view of the cathedral’s wide façade, complete with Gothic windows with fine tracery, lots of finials, and the cathedral’s most distinctive feature — the unusual ventilated crown spire, formed by eight flying buttresses. In 1707, the musical bells housed within this spire struck a morose note, when, following the Act of Union Between Scotland and England, they chimed to the tune “Why Should I Be So Sad on My Wedding Day?” — perfectly reflecting the unpopularity of the act throughout Scotland. At the main entrance, I noted the statues of bishops and theologians standing in niches surrounding the arch before I stepped inside this tremendous cathedral, which can seat a congregation of 3,000. The oldest parts, the four massive central pillars, date back to the 12th century. Newer spaces include the impressive Thistle Chapel, with its intricately carved ceiling and knights’ stalls, which feature each knight’s coat of arms and a canopy with his heraldic helm and crest. Amid the dozens of Gothic arches and stone columns, the rib vaulted ceiling (painted a glorious blue), and the elaborately carved pulpit, about 200 memorials throughout the church honor distinguished Scots and remember Scottish soldiers. The stained glass was added in the late 1800s, replacing plain and clear glass. Although this smacked of Catholicism, the Presbyterian church allowed it — as long as the images illustrated Bible stories that would aid the congregation in learning about their religion, such as the windows filled with Moses’ story, the Last Supper, and Judas’ fatal kiss. Over time, attitudes changes, and later windows depicting such saints as Andrew, Columba, Cuthbert, and Giles himself serve only a decorative purpose.

#2 Church of St. John the Evangelist 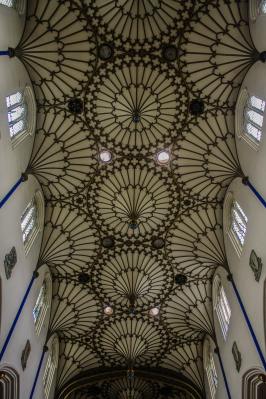 When I was 25 years old, my biggest concern probably was enduring the daily commute on New York’s awful subway system to a job that would employ me for seven years. When William Burn was 25, this wunderkind designed the gorgeous Church of St. John the Evangelist. Not exactly a parallel life, but at least I was wise enough to appreciate the work of this young genius. I approached the church via its adjacent graveyard, filled with gravestone of authors, historians, doctors, engineers, the beknighted, and one lady born a slave, most of whom died in the 1800s. The interior immediately dazzled me, and I envied the young architect’s vision and talents. Designed in 1815 but not completed until the early 1900s, the church features some exceptionally vibrant stained-glass windows, a lovely organ, and a black and white checkerboard marble floor. By far the most arresting feature is the absolutely gorgeous plastered fan-vaulted ceiling, modeled after the ceiling in the Henry VII Chapel in Westminster Abbey, itself one of the top five churches in London. Each circle, with its exquisite tracery, drips down from the ceiling into a pendant the same cobalt blue as the slender columns rising up the walls. It’s the highlight of this church, easily making it one of the most beautiful in the Scottish capital.

I came across St. Mary’s Episcopal Cathedral by accident. I was wandering around a part of the city about two miles from St. Giles’ Cathedral, in a section few tourists venture to. By just glancing down a random street, lined with orderly houses with countless chimneys, I saw the enormous building and its trio of soaring spires. Of course, I needed to investigate this unplanned stop. Begun in 1874 and completed in 1917, the cathedral holds the distinction of being the tallest building in urban Edinburgh, thanks to its 295-foot central spire, resting on a 5,000-ton tower, supported by pillars and buttresses. I made my way past the side of the church, with the rose window in its transept and gargoyles jutting out of the central tower, and then found I had to walk a half block up from the front to fully appreciate the cathedral’s scale and form, including the twin spires, shorter than the central one but still impressive. Built on the garden grounds of two spinster sisters, Barbara and Mary Walker, who funded the original construction, the cathedral has a grand central recessed arch, under which I passed to enter the vast interior. Plenty of stained glass fill the lancet and clerestory windows, including the Paolozzi Window, which floods the plain stone and woodwork across from it with a wonderful spectrum of colors when sunlight passes through its panes. A large rood cross hangs high above the altar, completed in 1912 as part of the National War Memorial, with the crucified Christ against a background of Flanders poppies. The reredos behind the high altar commands attention with its marble relief scene of the Cross at Calvary and the side statues of Columba and Margaret, saints critical to the development of Christianity in medieval Scotland. One of the cathedral’s most curious assets is a painting hanging in a side aisle. Titled The Presence, the painting, created by a local artist in 1910, depicts the interior of this very cathedral, with the congregation dutifully receiving Communion in the darker background, while, in the foreground, it’s the lone penitent kneeling behind rows of empty chairs who is comforted by the radiant figure of Christ behind her. Illegally sold during an exhibition in Europe while World War I raged, the painting became the subject of a widely followed legal saga until it eventually returned to the cathedral in 1944. Back outside, I looked up again at the twin spires, delighted to have learned that they are named, of course, Barbara and Mary.

The Virgin Mary is honored once again at this Roman Catholic Cathedral. Designed in 1814, St. Mary’s Metropolitan Cathedral has been frequently changed and enlarged, right through the 1970s. Originally a simple rectangular building with a shallow apse, the cathedral has since benefited from such additions and alterations as the extended sanctuary, the enlarged front porch with an exceptionally broad and low-rise staircase, and a new pulpit, baldacchino, cloister chapel, side aisles, arches, and Stations of the Cross that were carved and painted in Germany as a memorial to the men of the parish who died in the First World War. In 1932, the roof was raised, and now the vaulted wood ceiling is filled with panels in between the beams. At the clerestory level, colorfully painted crowned figures bearing coats of arms with swooping wings look Aztec in design, and below them, jutting out from the walls, equally colorful bars support a cross within a diamond from which hangs a trio of lights. I was most impressed, however, by the very first thing I saw when I entered — the cathedral’s distinctive mural surmounting the Sanctuary Arch, the work of a Belgian artist that depicts the Blessed Virgin Mary being crowned Queen of Heaven while angels all around play musical instruments.

Next door to the Church of St. John the Evangelist, St. Cuthbert’s Parish Church is thought to be the oldest ecclesiastical site in Edinburgh. Tradition holds that the Celtic missionary Cuthbert preached from this spot in the seventh century and established the first church here. Since then, seven buildings have stood on this spot, but all traces of prior structures have been erased, except for the spire with its four clock faces and the Memorial Chapel from the 1775 structure that still survive in the current church, completed in 1894. I approached it from the rear, past the two towers and well-defined semi-circular apse with the gray dome. My path led me through the church’s graveyard, filled with mossy and lopsided tombstones dating back to the 1600s, including those for the inventor of logarithms, Charles Darwin’s uncle, the co-founder of the Encyclopaedia Brittanica, the opium-addicted author who is widely regarded as one of Edgar Allan Poe’s chief influencers, and the first British surgeon to remove an ovary and who identified the dangers of tobacco, including its carcinogenic nature, way back in 1856. The interior is fairly plain, but this church’s beauty stems from its details. For instance, among the lovely traditional stained-glass windows (Old Testament scenes on the north side; Gospel scenes on the south), I found one of only a few Tiffany windows in all of Scotland, this one depicting David on his way to meet Goliath. A beautiful alabaster frieze of the Last Supper wraps around the apse, divided into three sections by two pilasters. Above the Communion table, the four evangelists are painted on the ceiling in individual panels. The marble and alabaster pulpit, with a relief panel of the Angel of the Gospel, rises several feet above the tops of the pews. After looping around the entire church, I easily understood why Agatha Christie chose this place for the site of her second wedding.