Usually, even in its largest cities, Switzerland’s skyline is the Alps—snow-capped behemoths seemingly everywhere. Lower your eyes 10,000 feet or so from their peaks and often you’ll see a different kind of skyline: steeples and domes of the country’s beautiful churches. For nearly a millennium, these buildings have been complementing their taller, rockier background neighbors. These are my favorites. 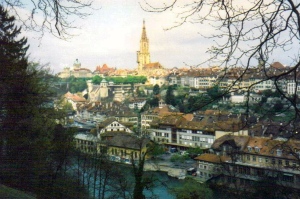 I was officially escorted out of the cathedral—they wanted to lock up for the evening, I wanted to stay. My attempts at persuasion failed in their struggle against ingrained Swiss precision. I had first spied the enormous Bern Minster clamoring for attention above its shorter neighbors from across the Aare River, which wraps around the historic core of Bern as it spills down a peninsula. Strolling under the Swiss capital’s UNESCO-designated arcades, I arrived at the cathedral late in the afternoon. The largest and most important late medieval church in the country, measuring 276’ long and nearly 111’ feet wide, soared up before me in glorious majesty. The foundation stone was laid in 1421, but the main body of the cathedral wasn’t finished until 1573, and construction did not officially end until 1893, when Switzerland’s tallest steeple, at 330’, was added to the bell tower. During that time, the Reformation redirected its propagation from Catholics to Protestants, yet the Protestant minster retains some ornate details more common in Catholic cathedrals. I found much to admire here, including the bell tower, which contains the largest bell in Switzerland, cast in 1611. Fourteen flying buttresses support the walls of the central nave, each one beginning as a decorated column and sporting egg-shaped cutouts. I entered through one of the three portals (each with a different height, shape, and decoration). Inside, the intricate carved woodwork of the oak pews and choir stalls vie for attention with the lace-like structure of the vaulted ceiling and with the captivating stained-glass windows (some dating back to 1450) with Christian figures, local heraldry, and entire panels depicting the Dance of Death that are all represented in vibrant colors and seem to shine even on a cloudy day.

Once I heard the doors lock behind me as I was politely shown the exit, I had plenty of time to gape at the cathedral’s most remarkable feature, one of the most beautiful entryways in the world, at the central portal. The five Wise Virgins stand to the right of the doors and the five Foolish Virgins to the left, all of them holding their oil lamps—the former group with full ones, while those of the unfortunate and unprepared latter group are empty. Under them, beautifully painted faces and torsos of the Queen of Sheba and King Solomon project from the wall. The archivolt contains three rows of figures: Jesus, Mary, and the Apostles stand on individual platforms along the outer row; eight Old Testament prophets line the central row; and the inner row sports five angels holding the Arma Christi—the Instruments of the Passion, such as the Cross on which Christ was crucified and the pillar where He was whipped. A sixth figure in this last group, at the lower right corner, is hardly angelic: a demon beating a drum and blowing a horn, with a bearded man’s face emerging from red flames. This fearsome creature is a bit of an extension of the tympanum, a true masterpiece that contains the only statues in the entire cathedral that survived the iconoclasm of the Reformation. More than 15’ wide at the base, the tympanum depicts the Last Judgment with more than 100 sculpted figures that are about 600 years old. In the center, Justice stands with her scales at her feet, tipped in favor of the righteous by an innocent sitting in the left pan, palms pressed together in prayer. The saved, clad in white against a sky-blue background, crowd the left side, mixing with saints, bishops, and a solider or two, some holding gold crosses. The peccant figures on the right side of the tympanum, Hell, do not fare as well. It teems with the wicked—a dystopian realm of naked figures suffering at the hands of chthonic demons and barbaric beasts with ferocious teeth in the midst of red flames against a black background. The details are spellbinding, from fingernails and curls of hair to folds in a sleeve and writing on scrolls. For centuries, it has served as either a comforting or frightening reminder of what awaited churchgoers at the end of their life.

Home to one of the world’s best memorials, Lucerne also boasts one of Switzerland’s top churches. This Baroque beauty commands a handsome presence on the banks of the Reuss River. And with good motivation: The Jesuit order was actively engaged in the Counter-Reformation against the birth of Protestantism and needed to make a statement. I believe they succeeded. Architects from Italy and Austria began construction on the Jesuit Church in 1666, basing their design on that of the Church of Jesus, one of the most beautiful churches in Rome. Although consecrated in 1677, the building was not completed until 1893, when the two iconic onion-topped towers were added. Fronted by an open plaza with grids of white and dark-gray bricks and a staircase that descends into the river itself, the church features a statue of St. Francis Xavier, the church’s patron saint, in a niche over the main door and coquillages over the four smaller posterns. I stepped inside to admire its opulent interior. As Switzerland’s first major sacred building built in the Baroque style, it oozes ornate details: a white interior embellished by rose and white plaster; a towering pink altarpiece of plaster and stucco that resemble marble; fantastic pew ends; inlaid stonework in the side altars; and a barrel ceiling decorated with recessed paintings, including one of St. Francis. If you come for all the church’s wonderful sights, be sure to stay for its sounds, too. Its fine acoustic makes it the ideal venue for concerts and for organists to learn their lessons. 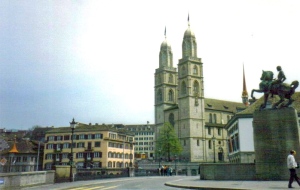 While I was attending the Sechseläuten, Zurich’s traditional spring festival that culminates in a parade and the burning of a straw and cotton wool snowman, I kept noticing the twin towers of the Great Minster looking down at the festivities. Just steps from the Limmat River, this Romanesque-style Protestant church towers over the city. Legends holds that in the late eighth century, Charlemagne founded a church here when his horse suddenly fell to its knees on the spot where the Frankish king then discovered the graves of the city’s patron saints, Felix and Regula (beheaded in 286). The present church replaced it in 1220, but it didn’t receive its final touches until centuries later. The stately Swiss sandstone exterior received its signature towers in 1787 and have become the city’s most recognizable landmark. Although I rather admired them, Richard Wagner apparently did not, deriding them as two pepper dispensers. Instead of at the base of the towers that border a cobblestone plaza, entrance is gained through portals on the north and south sides. One has a semicircular staircase and a tympanum filled with a Chrismon, alpha, and omega; the other has a striped archivolt supported by columns with sculpted capitals with half-man, half-bird grotesques. Both have bronze doors with finely sculpted panels of religious scenes that were added in 1935 and 1950. The somewhat understated interior reflects the Reformation’s antipathy to the pomp of Catholicism, but there’s still plenty to see: a lovely pulpit with sounding board, groin vaulted ceiling, Romanesque arches resting on formidable piers, and stone panels with the tetramorphs of the four evangelists on either side of a staircase leading up to the choir stalls. Stained-glass windows provide pops of color, from those added in both 1932 and the 21st-century, the latter of which are made of agate cuts. Outside, a cloister that dates from the late 12th century provides a calm oasis with both a central garden filled with cultural and historical ornamental plants, and zoophoric pillars and arches sporting odd figures, animal scenes, and grimaces that unleash your imagination.

I found the most important church from the Renaissance period in Switzerland in Lucerne, one of the country’s prettiest cities. The current church, from 1639, rests on the foundation of a Roman basilica destroyed by fire in 1633. It incorporates the survivors of that fire—an altar and a few religious objects, but, most importantly, the iconic twin towers. I approached via a broad staircase, offering the perfect view. The spires of the towers taper up to points so fine they would rival a hypodermic needle. In between, a white stone entrance sports an archway, small rose window, and a clock. I stepped under the arch and was impressed by the six statues, three on either side of me, of saints like Nicholas, Benedict, and Peter, standing in niches with outstanding stenciling, including fine scallop shells, framing them. The masterfully carved wood door in front of me bore sculptures of saints Mauritius and Leodegar, a Burgundian bishop who was martyred in 679. Inside, the white stone interior is relieved by a high altar and a baptismal font of black marble, a 30-ton organ dating back to 1640 that had the tallest and heaviest pipe in the world at the time, and some exuberant altarpieces, including the Mary Altar that survived the fire, depicting the dying Virgin Mary in bed, surrounded by the Apostles. Keep an eye out for the different wooden pews—the ornate ones for the wealthy parishioners, the simple ones for the poor, a reminder that status separated who worshipped where.

Raised above street level, across the Limmat River from Great Minster, St. Peter’s Church stands on the site of multiple former structures, including a Roman temple dedicated to the deity Jupiter. The current church merges foundation walls from the ninth century (which makes it the oldest church in Zurich) with elements from the 13th century church and those of extensive alterations in 1705. Until 1911, a fire watch manned the tall tower (increased in height to 210’ in 1450). A broad staircase leads up to a cobblestone courtyard, where I admired the pale blue walls, cream-colored quoins, and simple covered entrances. Inside, ocular windows, like extra-large portholes, fill the nave with light, while arched windows illuminate the upper gallery that wraps around three walls, both supplemented by crystal chandeliers modeled in a 1710s style. Swirling floral stuccowork adds great detail, the baptismal font dates back to 1598, and the choir chairs with armrests that flank the walls under the gallery are even older, from the 1400s. Above the raised pulpit, over the sounding board, a rich acanthus adornment features a verse from the Book of Matthew. The church’s claim to fame, however, is outside, so I retraced my steps and emerged from the building and looked up at the tower, which houses five bells that date from 1880, the largest of which weights six tons. Just under the spire are the largest church clocks in Europe, one on each of the four sides. Since the end of the 13th century, these mechanical clocks have been keeping the city’s residents and guests on time. Through the years, they have been repaired, restored, and replaced, and for centuries they were Zurich’s official time—all public city clocks had to conform to them. Each clock face has a diameter measuring just over 28’, with the minute hand clocking in at 12’ and the hour hand at eight feet. Viewed from up close or from across the river, these clocks are massive and ensure you’ll never be late.