In this state of extremes, it’s impossible to resist the temptation to clock 100 miles per hour in your car along arrow-straight highways through the nothingness of some of the most barren landscapes in the United States. It’s equally impossible to resist the temptation to crawl at 10 miles per hour along serpentine back roads through some of the most spectacular scenery in the United States. One of the largest and least-populated states in the country, Wyoming boasts an admirable diversity of things to see and do, from marveling at abundant wildlife to buying some quality cowboy boots made in America. These are my favorites.

Established in 1872 as the first national park in the United States, Yellowstone National Park simply cannot be surpassed in terms of the diversity of its abundant treasures. And you’ll need a good week to really take in all of its 28,000 square miles. Five roads leading into the park all eventually merge with the figure-eight loop that will bring you to all of the park’s gems. The Yellowstone River and long-vanished glaciers have carved one of the park’s most stirring assets — its very own Grand Canyon, an incredible chasm that runs for 23 miles and plummets to a depth of up to 1,200 feet. Waterfalls such as the Upper and Lower Falls, Lewis Falls, and Gibbon Falls add dramatic accents to beguiling scenery. You’re practically guaranteed to mingle with some of the park’s denizens, including 67 species of mammals and 330 species of birds, from adorable chipmunks to thunderous herds of buffalo, and almost always with a bird of prey or two circling above you. I was most impressed by the park’s geothermal areas — landscapes of bizarre formations and living geology that seem more appropriate to a sci-fi flick on another planet than a park in Wyoming. At West Thumb Geyser Basin, Midway Geyser Basin, and Firehole Lake Drive, boiling pools, bubbling mudpots, fumaroles, travertine terraces, the world’s largest concentration of geysers, and the third-largest hot spring in the world (where pigmented bacteria living on sheets of microorganisms in the mineral-rich water produce hyper-vibrant colors from one end of the spectrum to the other), left me in total awe of nature’s forces. It was these fantastical features in particular that served as the original impetus to preserve the area in a national park that’s simply unbeatable.

Majestic mountains rise abruptly from Jackson Hole Valley in Grand Teton National Park. Unobstructed views of these staggering masses of granite and gneiss beckon you closer, and you’ll relish the opportunity to surround yourself with so much magnificence. With more than 200 miles of hiking trails, Grand Teton makes that exceptionally easy to do, regardless of your fitness level. Trails range from half a mile to more than 30 miles and can gain in elevation anywhere from 10 to 5,000 feet, taking you up to the 10,000-foot mark. A couple of my favorites are the Taggart Lake Trail, which leads you to the shore of this unspoiled lake, with jagged, snow-topped mountains beautifully reflected in its pristine water, and the Jenny Lake Trail, which loops around the park’s second-largest lake, with a depth of more than 400 feet. The unpaved Schwabacher Road brings you down to a gentle stretch of the Snake River where you’ll enjoy fantastic views of the Teton Range while watching waterfowl floating around beaver dams. Trails to Jackson Lake reward you with the opportunity to stroll along the shore of the park’s largest lake, dotted with sailboats and hemmed in by soaring mountains, including the 12,605-foot Mt. Moran, sometimes mysteriously enshrouded in fog and low clouds. And any path to Oxbow Bend, a slow-moving curve in the Snake River, encapsulates everything that makes this park so photogenic — gorgeous views of serrated mountains; abundant wildlife that ranges from giant moose to regal bald eagles to playful river otters; and reflections of the sizzling red, orange, and yellow colors of the riparian trees in the throes of autumn. 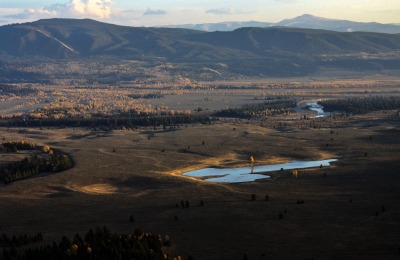 Hop in your car in late afternoon and drive up the five-mile switchback Signal Mountain Summit Road, cognizant of the mule and white-tail deer that will inevitably cross in front of you. The road climbs 800 feet to the summit of Signal Mountain (about 7,700 feet) and a vantage point that boasts a seemingly endless view of the Teton Range and Jackson Hole Valley. Absorb the spectacular panorama all around you and wait for the sunset/moonrise through pink clouds over Jackson Lake and the Snake River. Listen carefully for elk bugling, an eerie, high-pitched sound emitted by the males in search of mates, echoing in the valley. Befriend your fellow travelers who have gathered beside you — in my case, a gentleman from my neighborhood in New York who just happened to have a powerful telescope that he shared with me so that I could zoom in on two elk bulls in a very aggressive tussle.

I wouldn’t want to stay here — far too many tourists streaming in and out and around the inn create human traffic jams all day long. Visiting Old Faithful Inn, however, is a different story. Constructed with locally obtained materials during the winter of 1903–04, this mammoth inn — the largest log structure in the world — runs nearly 700 feet in length, and parts of it reach seven stories high. Added to the National Register of Historic Places in 1973 and designated a National Historic Landmark in 1987, the inn set the rustic-style standard for national park lodges that popped up in the early 1900s. Its steep pitched shingled roof, punctuated with dormer windows, and columns of logs that support the viewing deck above the main entrance, stacked atop one another and sharpened at the edges like pencils before a math test, give the inn a spiky appearance. Inside, a massive rhyolite fireplace in the center of the lobby dominates the cavernous space, reaching up to the ceiling 65 feet above and featuring a hand-crafted copper clock about two stories up. Around the chimney, four floors of balconies with lodgepole pine railings, accessed via log staircases with gnarled balusters, afford different vantage points to appreciate the grandeur of the space. You can try to score a rocking chair around the fireplace to take in the whirlwind of activity around you, or do what everyone who checks in here is going to do: watch the reliably punctual Old Faithful geyser erupt just steps from the inn itself.

In the highly unlikely event that you don’t spot any wildlife roaming around the national parks you’re here to visit, you can spend a couple of hours in the National Museum of Wildlife Art checking out some of what you’ve missed. Just a minute or two outside of Jackson, the rough stone museum, inspired by the ruins of Slains Castle in Scotland, blends naturally into the rocky outcrop opposite the National Elk Refuge. Wildlife sculptures line the three-quarter-mile trail leading to the museum’s entrance. More than 5,000 catalogued items by over 550 artists, including Frederic Remington, John James Audubon, Ansel Adams, Goya, Picasso, and Rembrandt, are housed in the museum’s 51,000 square feet. Their work covers a vast array of media — oil and watercolor paintings, bronze and marble sculptures, photography, pencil and charcoal sketches, and so on. And their subjects are even more expansive. Particularly striking are Chief, an arresting acrylic of a male bison staring directly at you as he emerges from a haze of snow, so lifelike that you could almost hear his breathing; the lovely and whimsical Tiger Observing Cranes; and Arctic Gyr Falcon, a watercolor whose subject seems to look at you and know exactly what you’re thinking.