Steamy Waimangu will impress you right from the beginning.

The smell of sulfur in the air greeted me as I emerged from Robertson House, my bed and breakfast in New Zealand’s North Island city of Rotorua. It continued to filter in and out of my car as I headed south. It’s no wonder, given that Rotorua lies in an active geothermal area filled with bubbling mud pools, hot springs, and geysers, earning it the nickname “Sulfur City.”

One of the most fascinating regions in this part of New Zealand is Waimangu Volcanic Valley. The world’s newest geothermal system literally exploded into existence on June 10, 1886, when the volcano Mount Tarawera erupted. That cataclysmic event destroyed the world-renowned Pink and White Terraces and extinguished all plants and birdlife here, the volcano’s eructation covering the area in mud and ash that averaged 66 feet thick. A regeneration began almost immediately, with the development of hydrothermal surface activity and geothermal features as well as the evolution of new soil, followed by new plant life and birdlife — making this the world’s only geothermal system created within written history. 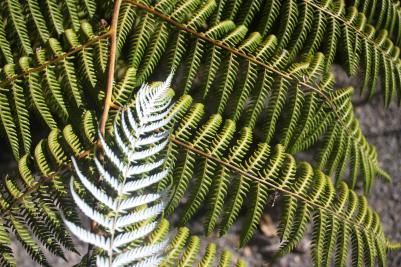 Both sides of the silver fern.

From the entrance of Waimangu (which means “black water” in Maori), I began my 2½-mile walk, a gentle descent on gravel paths and the occasional boardwalk through unearthly landscapes that almost immediately started with Southern Crater, a 160-foot-deep crater, filled in by a lake reflecting the blue from the sky and green from the lush vegetation around it.

I continued on, not really looking for hobbits, elves, dwarves, or ents, but not expecting to be a bit surprised if any of them should appear. Rather, I did start to notice the puffs of steam ahead of me, trapped in the hills and rock formations like low-lying clouds. An impressive panorama opened up to my left, drawing me closer to Echo Crater, filled in by Frying Pan Lake. Eventually, the trail led me right beside the crater — the largest one here — and the lake, which is the world’s largest hot spring, covering 410,000 square feet and reaching a depth of 20 feet. Through wisps of steam rising from the lake’s surface, I inhaled the rotten-egg smell of sulfur and viewed gorgeous sinter terraces, the occasional fumarole, and little islets in the water covered in deep-green algae, careful not to touch the acidic water. With an average temperature of a scalding 131°F, this is not a spring where you’d like to take a soak.

Orange and white silica add a splash of color to all the greenery.

From here, it was just a short walk past Cathedral Rocks to Inferno Crater Lake, the world’s largest geyser-like feature (but you can’t see the geyser: it’s at the bottom of the lake) whose sky-blue water reaches temperatures of 176°F.

Although the valley is filled with natural creations such as these, it’s also a thrill for botanists and bird-watchers. All of the plant life here developed organically, via birds and the wind carrying spores and seeds; humans played absolutely no role in developing the valley’s flora. More than 50 different tree and shrub species can be found here, plus an additional 50 types of ferns, including the country’s symbolic silver fern — green on the mature fronds’ surface, silver-white on the under-surface. Among all this greenery, sharp eyes will spot birds like the large and colorful kereru (New Zealand pigeon) and the tui, and alert ears will pick up the sweet song of the bellbird. As I continued my trek, I noticed more than one piwakawaka, or the New Zealand fantail, checking me out from their perches amid the tangle of tree branches.

The end of the road.

I next arrived at Warbrick Terrace, orange and white silica platforms leading to a pool of silica-rich water that bears a stunning milky-blue color and emits feathery plumes of steam. Ultimately, the trail ends at the beautiful Lake Rotomahana. Across this body of deep-blue water, traversed by a bevy of languorous black swans, I spied the gaping hole in the side of a mountain — very clear evidence of the volcanic violence that took place here not that long ago.

Once you’ve had your fill of this dreamy scenery, you can choose to board a boat for a cruise on the lake, or you can head back the way you came, by foot…or by the convenient shuttle bus in case you’ve become too overwhelmed by the bizarre and unusual beauty you just experienced for a few hours.