Along the Way of the Cross, you can stop at each of the 14 Stations of the Cross and experience Jesus’ last day on earth.

“Thank you for helping me walk again.”

“Thank you for taking away my brain tumor.”

“Thank you for curing my son’s heart disease.”

The notes were everywhere. So were the photos. And the crutches and the canes and the braces. Clearly, this was going to be a more spiritual visit than I had expected.

My friend and I hadn’t come to the Basilica of Sainte-Anne-de-Beaupré on a pilgrimage or to make any special request. But every year, more than 500,000 people do, and they arrive with a mission: to beseech Ste. Anne (that’s Mary’s mother, and Jesus’ grandmother) to help them or a loved one.

Located in the town of Sainte-Anne-de-Beaupré, about 20 miles east of Québec City, the basilica stands in a tranquil spot on the St. Lawrence River. To its left, the Way of the Cross winds its way up the hillside, a quiet path under maple trees that explode into fiery colors every autumn. Along the way, visitors can stop at the 14 Stations of the Cross, each displayed in a scene of about five bronze life-size statues. It’s a peaceful and reflective complement to the tremendous basilica beside it.

The handsome basilica has been visited by pilgrims for nearly 70 years.

Completed in 1946 after the original basilica was destroyed in a fire in 1922, this second version was built in the Romanesque Revival style in the shape of a cross. The two bell towers top out at 328 feet each, and the light-gray stone and blue-green roof of the appealing and restrained structure convey a sense of calm.

Passing under the rose window, the sculpted 12 apostles, and the elaborate bas-relief frieze of Ste. Anne in all her glory, and through the handmade copper doors depicting the life of Jesus, we entered the basilica and were immediately greeted by two pillars strapped with rows of crutches, leg braces, walking sticks, and canes, many accompanied by photos of and handwritten notes from people who had come here to ask Ste. Anne for relief from a wide variety of afflictions, illnesses, and diseases.

Apparently, the healing started right from the beginning, when one the basilica’s builders ditched his crutches upon completing his work on the church and walked without assistance for the first time in years. Nearly seven decades later, judging by the number of notes and discarded mobility aids here, Ste. Anne seems to continue to be very generous.

It was a jolting way to begin a walk around a church, and I felt like I was intruding on the personal lives, now so publicly exposed, of those who had suffered and recovered. I glanced at the other visitors near me, some with tears in their eyes, visibly affected by the faith of the pilgrims who believed Ste. Anne had intervened on their behalf. They must have felt the same way I did: Although camera flashes were going off in the rest of the church, no one was photographing this particular display — it was simply too intimate to be treated as a tourist attraction. 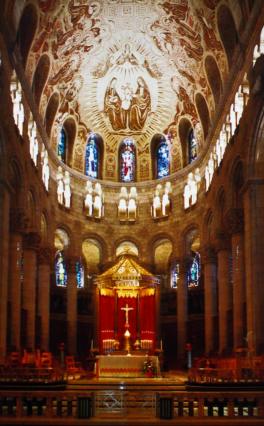 Ste. Anne and Mary are prominently featured on the ceiling above the altar.

Pulling myself away from this poignant sight, I began to focus on the basilica’s other features, but that first impression persisted during my entire walkabout, heightening the divinity of this place. Throughout the basilica, 240 superb stained glass windows let in a constant flow of light, warming up golden mosaics and illuminating the vaulted ceiling, which is covered in mosaics portraying the life of Ste. Anne as a holy Jewish woman. Above the altar, also in mosaic, Ste. Anne presents a fruit to the Baby Jesus as she sits beside Mary. There’s obviously no mistaking who this church is honoring.

Wrapped around and behind the altar, 10 chapels radiate off the semicircular ambulatory. Each one, with its marble and glittering mosaics, is dedicated to a different saint who made a significant contribution to the Church, including Ste. Anne’s husband, Joachim; her son-in-law and Jesus’ stepdad, Joseph; and the patron of French Canadians, St. John the Baptist.

Above the chapels, a continuous mosaic illustrates the history of the Eucharist, including the somewhat graphic “Le Martyre de Saint Tharcisius”: The third-century Roman youth is being stoned and beaten to death by an angry mob intent on robbing him of his delivery of the Eucharist to imprisoned Christians.

On my way to the lower level, I paused at a statue of Ste. Anne, where a pile of notes was mounting — prayers and requests from countless pilgrims asking for salvation from whatever ailed them. And if the statue wasn’t enough to get them close to the venerated saint, the basilica houses four of Ste. Anne’s relics, including a finger bone and a wrist bone.

Downstairs, past the striking replica of Michelangelo’s Pietà, I entered the Immaculate Conception Chapel, large enough to be a church in its own right, which offers visitors a quieter place of reflection than upstairs. I sat in one of the pews and spied some of the 176 small, simple, and colorful mosaic column capitals of butterflies, flowers, and birds, thankful that I wasn’t stricken with anything that would have brought me here for any reason other than a vacation. 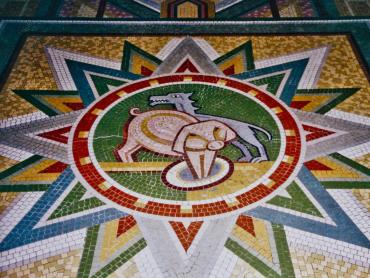 Gluttony, portrayed in mosaic tiles on the basilica floor, reminds us to stop pigging out.

Of course, not everything here is so serious. Back upstairs, I strolled down the central aisle, ticking off each of the seven deadly sins represented almost playfully in mosaic on the floor. And carved into the end of each pew is one of 260 different animals and plants, and not just biblical ones. Other than perhaps a Noah’s ark reference, it was the first time I ever saw a giraffe or a penguin included in a church.

On our way out, my friend and I crossed paths with a tour group that had just entered. As they gathered around the columns of crutches and started to listen to the guide explain their significance, one gentleman, who appeared to be in his seventies, spoke up.

“I came here a few years ago to ask to be cured,” he said with a hitch in his voice. “I’m back now to say thank you.”

When he mentioned his disease, a rare and almost always fatal blood disorder that I had never heard of, my friend — a registered nurse who works in the intensive care unit in one of New York’s top hospitals — tugged on my arm. “No one survives that,” she said. But, apparently, someone had.

Medical miracle? Divine intervention? No one can say for sure, of course, but after spending some time here, you might just lean a little more toward the latter.

2 thoughts on “Miracles in Québec”