From Rhode Island to the Midwest, and especially in his New York City home base, George Browne Post beautified the urban landscape with his gorgeous buildings. His clients included Joseph Pulitzer, Cornelius Vanderbilt, and The New York Times. He was widely respected by other leading architects of his time, even when he cast concern on his profession’s ambitions: Although he got in on the ground floor of early skyscrapers, he argued against their unrestricted heights. At various times throughout his celebrated career, he served as president of the American Institute of Architects, the Architectural League in New York, and the National Arts Club; director of the Municipal Art Society of New York; and permanent committee member of the International Congress of Architects. President Theodore Roosevelt appointed him to the Bureau of Fine Arts. He received an honorary Doctor of Laws from Columbia University as well as awards from Great Britain and France.

Unfortunately, the wrecking ball did not revere Post as much as everyone else, and entirely too many of his buildings have been egregiously demolished, much to the dismay of those of us who appreciate the work of this “picturesque designer and determined realist.” Yet, there are survivors. These are my favorites. 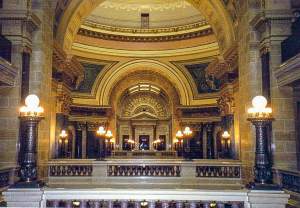 Post’s last major commission—won in a competition in which he beat out four other architects—was also his best. Although he didn’t live to see it to completion in 1917, his sons, both architects and part of Post’s successor firm, George B. Post & Sons, made sure it adhered to their father’s design. Not far from my where I was staying, the Mendota Lake House B&B, the Wisconsin State Capitol, which cost $7.25 million to construct and remains one of the most beautiful capitols in the United States, brightens up downtown Madison with its white marble façade; at night, when it’s illuminated, it’s even brighter. Four wings radiate from the capitol’s core, topped with one of the world’s most beautiful domes. At just three feet shorter than the dome of the national capitol in Washington, D.C. (a concession made during construction), Wisconsin’s dome was vindicated by the fact that it is larger by volume. Measured as such, it’s one of the largest domes in the world; it’s also the only granite dome on a U.S. capitol. At the end of each of the four wings of the building, Corinthian columns support a pediment with a tympanum filled with bas-reliefs that represent the branch of government housed in that particular wing. More than 40 kinds of stone embellish the interior, originating from places as close as Wisconsin and Minnesota and as far away as Algeria, Greece, Italy, and Norway. Stained glass, skylights, barrel vaults, and wonderful wall and ceiling murals abound, including The Marriage of the Atlantic and Pacific that commemorates the opening of the Panama Canal. Precious marble inlay surrounds the rotunda, and the floor of the Governor’s Conference Room was laid with seven different woods and not a single nail. A 34’-diameter mural, Resources of Wisconsin, spans the apex of the interior dome. And below, in the pendentives, four brilliant mosaics of 400,000 pieces of colored glass, each about the size of a quarter, depict Liberty and the executive, judicial, and legislative branches of the government—one of the capitol’s most striking splashes of color. 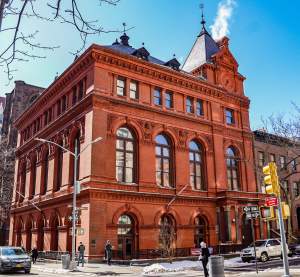 I have the privilege of walking by the Brooklyn Historical Society nearly every day. Just a few blocks from my home, this sumptuous building always makes me smile. Built in 1881 as the home for the then Long Island Historical Society, this National Historic Landmark now operates as the Center for Brooklyn History, with a museum, library, and educational center that focuses on the study of Brooklyn’s 400-year history. In 2007, it opened the first gallery in the United States devoted to oral history. Post won the commission in a competition that included 13 other architects. He created a Romanesque Revival masterpiece that includes a landmark interior two-story library with high ceilings, gallery, elaborately carved woodwork, and stained-glass windows. Outside, there’s a terrific clock rising from the top floor along the shingled roof. The building is especially noted for its rich terra cotta ornamentation, including busts of a Viking and a Native American wedged into the spandrels of the arch at the main entrance. It’s always fun to hunt for other busts on the façade, like those of Michelangelo, Beethoven, Shakespeare, Columbus, Gutenberg, and Benjamin Franklin, surrounded by local flora. Every time I walk by, I thank Post for creating what the American Institute of Architects Guide to New York City calls “one of [New York’s] great architectural treasures.” 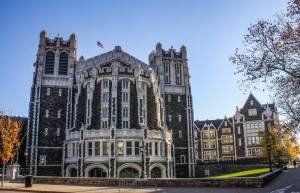 A swath of 36 acres in the Harlem neighborhood of Manhattan are given over to City College, part of the City University of New York, the largest public university system in the United States. City College’s first and best building on its new campus, Shepard Hall, was completed by Post in 1907 in the Late Gothic Revival style, setting a precedent for campus buildings that followed. The hall was named after alumnus Everett M. Shepard (Class of 1869), perhaps not as familiar as future City College alumni Jonas Salk and Colin Powell. Its stone and terra cotta work provides an engaging contrast of materials. Towers and an abundance of grotesques, many engaged in academic activities, add to the hall’s visual interest. Inside, Albert Einstein, Woodrow Wilson, William Taft, and Franklin Roosevelt walked the halls on their way to deliver speeches. The Great Hall features stained-glass windows and emblems from other U.S. colleges. In 1994, the building was listed in the New York and the National Registers of Historic Places. 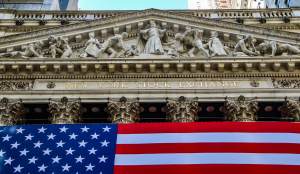 Both famed and vilified, Wall Street remains one of the main draws in Lower Manhattan. And nothing represents it more than the New York Stock Exchange Building. Post was responsible for the older section of this two-part structure, a commission he received after besting seven other architects in a competition. His Classical Revival–style beauty, with a white Georgia marble façade and completed in 1903, employs all the key elements of a typical Greek Revival public structure: symmetry, columns, pediment, and ornate entablature and moldings. A two-story base features arched windows on the second story with a series of balconets supported by ornate brackets that serve double duty as lintels for the tops of the basement openings below them. Above the base, three-story windows, broad colonnades, and six fluted Corinthian columns soar upwards. Behind them you’ll find the original open 72’-tall trading floor of the world’s largest stock exchange as measured by market capitalization of its listed companies. The columns hold up an entablature with the words “New York Stock Exchange” in capital letters and a gorgeous 110’-wide pediment with 11 sculptural figures depicting commerce and industry—four pairs portraying planning and building, exploring and mining, science and industry, and agriculture; and two small children sitting at the feet of the central female figure, representing integrity, which, given how corporate America sometimes runs, has become a bit laughable. All the figures, originally carved in marble, were replaced by sheet-metal carvings coated with lead in 1936—another Wall Street deception perpetrated on the American public. Above it, a cornice with egg-and-dart molding with lions’ heads runs along the façade, topped by a parapet with a balustrade. Designated a National Historic Landmark in 1978 and a New York City Landmark in 1985, Post’s building remains one of the world’s most important places of business and, certainly, one of its most attractive. 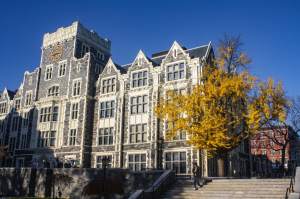 Another component of the CCNY campus is Townsend Harris Hall, named for the founder of the college. Completed in 1908 as one of the college’s five original structures, the building makes up part of the Gothic Quadrangle on the campus, dedicated the same year at a ceremony featuring Mark Twain as one of the speakers. Erected on the highest point of the campus to take advantage of views of the Hudson River and New Jersey on the other side, the building required extensive blasting and excavating to accommodate its foundations. Post offset the cost by using the excavated rock—Manhattan schist—for the building’s walls. The stones vary in gray color, with naturally rusty and iron-touched accents, and are perfectly offset by white terra cotta trim, richly decorated with shields and grotesques. The central crenulated tower features a two-story bay window and a large clock. Now the home of the college’s biomedical program, it remains one of the most stately college buildings in Manhattan.