During dinner at San Chez Bistro in Grand Rapids, a local resident recommended that I visit the Gerald R. Ford Presidential Library & Museum while I was in town. It hadn’t been on my list of things to see — it sounded rather dull. But I took his advice when I found myself with some extra time, and, quite unexpectedly, it proved to be an interesting and enlightening experience, as the story of the 38th president, who was out of office before I reached my ninth birthday, unfolded via excellent exhibits. It was just one of many noteworthy museums in a state that boasts a few hundred. These are my favorites.

One of my favorite paintings is housed in Michigan’s best museum, the renowned Detroit Institute of Arts. In Henry Fuseli’s creepy The Nightmare, from 1781, a sleeping lady clad in a clingy white gown lies in a rather sultry position. An incubus sits on her abdomen, and a demonic horse with lifeless eyes emerges through a curtain in the shadowy background. A sexually risqué painting at the time, it is widely held that the piece is a portrayal of the physical and emotional anguish of those suffering from sleep paralysis, a condition in which someone, on the verge of sleep, undergoes an inability to move or speak, a tremendous pressure on the chest, and an awakening accompanied by sheer panic, dread, and fear. As someone who has experienced this, I can testify that Fuseli perfectly brings these sensations to life in his frightening painting. It’s one of the highlights of one of the top art museums in the United States. Located just a couple of blocks from my accommodations, the superior Inn on Ferry Street, the DIA presents a handsome face to the street — a three-story Beaux-Arts building from 1927. On my way in, I stopped to admire the sculpture Le Fleuve La Garonne (The Garonne River), represented by a lounging Neptune-like god, with an urn spilling out its watery contents. Tickled by the art that depicts the river with my surname (albeit with an extra “n,”), I entered through the trio of arches at the main entrance, into a world of 65,000 pieces of art that encompass millennia of drawings, paintings, photographs, prints, and sculptures from Africa, the Americas, Asia, Europe, and Oceania. The astounding collection contains everything from 3,000-year-old Egyptian figures to Dale Chihuly’s blown glass from the 1980s. Of course, the building itself is masterful, especially the Great Hall, lined with suits of armor from William Randolph Hearst’s estate under a barrel ceiling. But even better is Rivera Court. Under a wall-to-wall skylight, the entire room is devoted to Detroit Industry, 27 fantastic murals by Mexican Marxist Diego Rivera, who was commissioned by Edsel Ford to paint them. During the 1932–33 period, Rivera created the panels that comprise hundreds of figures and images representing the geological, technological, natural, and human history of Detroit, including factory laborers in Henry Ford’s auto plants, Meso-American figures, birds in fields of sunflowers, crops grown in Michigan, and the production of poison gas — all expressed as part of Rivera’s belief that everything is connected.

Tiny Hickory Corners (population: about 350) probably won’t appear on your Michigan itinerary, but there’s a very big reason why it should. Whether you are passionate about the automotive industry or have a total disinterest in it, the Gilmore Car Museum will utterly fascinate you with its collection of motor vehicles — one of the largest car museums in North America. This sprawling assemblage of 400 automobiles spanning more than a century began as a hobby, but when the collector’s wife suggested he open it to the public, they launched the museum in 1966. Housed in restored historic barns spread out over 90 acres, the collection, tended to with meticulous care, begins with a Locomobile from the 1890s, when the horseless carriage was considered a passing fad exclusively for the amusement of the rich. As I popped into the various barns, I found Model A and Model T cars; a 1929 Dusenberg that cost a whopping $20,000 to purchase in the year of its release; cars from the 1930s with massive bonnets, giant headlights, and wide running boards; the bizarre 1946 Stout; racing cars; trucks; and Checker cabs. The museum also boasts a hefty collection of ancillary exhibits, including more than 1,500 distinctive hood ornaments. You can take a break with a meal inside an authentic 1941 diner that typifies those which sprung up alongside roads as more Americans got behind the wheel. And then poke around the Shell gas station from the 1930s, complete with the smell of motor oil, the tools of a full-service garage from that era, and gas pumps advertising the price for a gallon: 18 cents. When you get back in your own car, you simply won’t look at it the same way.

Just a short drive from the Brayton House, my lovely bed and breakfast in the Heritage Hill Historic District, one of the top five historic districts in the United States, I pulled up to what turned out to be a surprisingly interesting museum, exceeding my expectations. A block away from the Gerald R. Ford Presidential Library & Museum, the tremendous building housing the Grand Rapids Public Museum — one of the oldest history museums in the United States, founded in 1854 — stands along the banks of the Grand River. Its hodgepodge of exhibits include immigration to Michigan, western Michigan’s wildlife, and a 1928 carousel you can ride. Even more engaging was the display of local history. Gorgeous pieces of furniture made in Grand Rapids when it was the city’s signature industry (akin to Detroit’s auto industry) that earned it the nickname “Furniture City” testify to the talented craftspeople who created pieces of art used for such utilitarian purposes as sitting, eating, and storing your socks or dishes. I also found two clocks in particular that fascinated me: One was the factory time-punch clock that warns “No Loafing”; the other was part of the stunning 1888 City Hall that was sadly demolished in 1969 as a result of misguided urban renewal. My favorite part, however, was the “Streets of Old Grand Rapids” exhibit. Through the entrance by the horse-drawn street car, I walked into a ¾-scale reproduction of the city as it appeared in the 1890s. Along brick-paved streets, I passed by storefronts re-created from actual businesses and buildings. I peered in at the merchandise available in the shops — the print shop, the department store, the drug store, the grocery store — that they would have sold over a century ago. Trained guides sometimes open these businesses and invite you in to learn about, for instance, the funeral parlor or the watch shop. Piped-in street sounds of people’s conversations or a clip-clopping horse add to your immersion into this handsome city of yore. 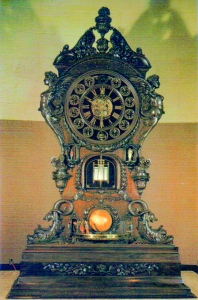 Dedicated in 1951 on the 250th anniversary of Antoine Cadillac’s landing and founding of the city, the Detroit Historical Museum encompasses everything that fascinates me about this living but badly battered city working on its renaissance. Outside the unimpressive building, which could pass for a low-rise jail, three poles fly the flags of the three nations that have governed Detroit — the United States, the United Kingdom, and the flag of the French kings and government in 1701, possibly the only place in the world where this one is raised. Inside, the museum traces the history of the city, including its meteoric rise that gave birth to such structures as the Guardian Building, one of the world’s most beautiful skyscrapers; the massive (and poorly located) Michigan Central Train Depot; the gorgeous mansions in the Brush Park neighborhood; and fantastic churches. Its themed exhibits include “America’s Motor City,” featuring an authentic auto body shop assembling a Cadillac and different model car seats on which you can sit to watch videos about the industry that made Detroit the fourth-largest city in the United States by 1920 (today it barely cracks the top 25); “Motor City Music,” an interactive space focusing on the rich heritage of the city’s music that still resounds in our mental jukebox; and “The Glancy Trains,” which not only explores the city’s rail travel, from trolleys to interurbans, but also displays a fantastic model train set with bridges, tunnels, station houses, and multiple tiers of rushing freight and passenger trains. Like the Public Museum in Grand Rapids, this museum has its own walk through the past. “Streets of Old Detroit” is filled with re-creations of storefront Detroit in the 1840s, 1870s, and 1900s, including such businesses as a printing office, savings bank, clothing emporium, confectionery, toy shop, bicycle shop, hotel, barber shop, saloon with a separate entrance for ladies, dentist office that ensured “A Lady Always in Attendance,” and drug store selling headache wafers, castor oil, and kidney and bladder pills. And like the Grand Rapids Public Museum, this museum houses a clock of great curiosity and tremendous beauty. Its name, “Meier’s Wonderful Clock,” downplays exactly how wonderful it is. Bavarian native Louis Meier took almost a dozen years to build this clock for his jewelry store in Detroit. With its gorgeously carved mahogany base, the clock stands almost 15’ tall and measures seven feet across, weighing in at more than 2,500 lbs. The main clock face is surrounded by 12 smaller clocks displaying the time in cities around the world, from Rome to Denver to Tokyo. A sphere at the top shows the phases of the moon, making a complete rotation every 29 days and eight hours, while a calendar at the bottom displays the day, month, and date. Miniature figures representing different nations and dressed in the traditional garb of their homeland march to music around a globe every five minutes. And, every hour, one of four men appear on the quarter-hour to ring the chimes: a child, a young man, a middle-aged man, and an old man, collectively representing the passage of time. As if all that weren’t special enough to make it the museum’s most treasured object, I was amazed to learn that all of its mechanisms are run by one single pendulum, which made it one of the most complicated compound clocks of its time.

After visiting one of the top 10 capitol buildings in the United States, I headed a few blocks away through the tidy and very clean city of Lansing to the Michigan History Museum. This museum traces the history of the state, from its earliest peoples to the late 20th century. Along the journey, I peeked into a somewhat spooky copper mine, a one-room schoolroom, a 1920s theater, and the entry to a lumber baron’s mansion. I learned about how 10 percent of the men constructing the Soo Locks died in their first year on the job, Detroit’s explosive growth from 300,000 people in 1900 to 1.5 million only 30 years later, and how Sara Emma Edmunds, a nurse and spy during the Civil War, became the only woman awarded full membership in the Grand Army of the Republic. Ninety thousand Michigan men joined the Union during the Civil War, 15,000 of whom died during its course. Employees at Henry Ford’s Highland Park factories was one of the earliest examples of a diverse workforce: In 1915, 53 nations were represented by the 15,000 employees there. Spic and Span was created by two housewives in Saginaw in 1933. From overarching issues to fun little factoids, this museum offers a fine, and very well-planned, introductory crash course to Michigan and will provide an excellent overview of what you’ll see when exploring the Great Lakes State.