I have long been fascinated by ghost towns, ever since I visited my first one back in 1994. From that time, these relics of the past have held special allure for me, prompting all sorts of questions. What was this place? How did it start? What happened here? Who lived here? Why did it cease to exist? Walking around these ghost towns provides a creepy sense of finality you can’t find anywhere else in the world where life continues to evolve. These places simply ended. Frozen in time, they transport you back to a forgotten age, perfectly capturing a bygone era. These are my favorites.

Once one of California’s largest cities, boasting a population that topped 10,000 in 1880, Bodie today is home to no one. At the end of a bumpy 13-mile road, the vast remains of Bodie appear, strewn across a barren, unforgiving, treeless landscape. The largest, best-preserved ghost town in the United States evokes countless images of America’s Wild West. As I roamed around the dusty streets of this former gold-mining town, exploring its 100 collapsing buildings, rusting equipment and automobiles, and teetering utility poles that still stand in a “state of arrested decay,” I tried to imagine life in this harsh environment and its inherent asperities. Bodie’s piacular reputation stemmed from its inventory of nearly 70 saloons, a red-light district of bagnios with eager prostitutes, opium dens, and gambling halls, and its history of frequent stagecoach holdups, robberies, and killings. But there was a more sedate, workaday side to this town, too, a typical Western boom town of its time, with a general store, firehouse, churches, bank, hotel, barber shop, school house, post office, Odd Fellows Lodge, Masonic and Miners’ Union halls, stables, morgue, bowling alley, horse racetrack, and county courthouse—many of which are still standing, although often lopsided and deteriorating.

Dwindling gold reserves obnubilated the palmy city’s boom days. When this precious metal ran out, the residents fled, leaving behind a treasure trove of personal items in their homes and businesses that you can still observe through spotty windows—coffee presses, unopened boxes of Ghirardelli chocolates, sofas, roulette tables, cast-iron stoves, primers, baby carriages, and maps of the United States before there were 50. Completely abandoned by the 1950s, Bodie was established as a California State Historic Park in 1962 and attracts about 200,000 visitors annually. Wrap up your time here by wandering around the hilltop cemetery and the graves of Bodie’s former residents, including the city’s founder, European and Chinese immigrants, and children who never made it to their first birthday, all buried in a desolate place that you will never forget.

Sand dunes rise inside living rooms, bedrooms, hallways, and kitchens, blown in by formidable winds through broken windows and empty doorways, rippled by nature and trod upon by humans. Here in the fascinating ghost town of Kolmanskop, Namibia, the desert is reclaiming what man started building in the early 1900s and completely abandoned in the 1950s. Founded as a diamond-mining town after the discovery of that glittering gem in 1908, Kolmanskop (or, as the German colonizers christened it, Kolmanskuppe) sprung up as an affluent town in the middle of nothing, yet about only 10 miles from the Atlantic coast. Complete with a hospital (and the first X-ray machine in the Southern Hemisphere), ballroom and music hall, power station, ice factory, theater, sports hall, school, and the first tram in Africa, Kolmanskop boomed for less than two decades, maxing out at about 1,600 residents, and pulling about one million carats (or nearly 12 percent of the world’s diamonds) from the ground in 1912 alone. Given its small size, Kolmanskop was the town with the highest per capita wealth in the world for a short time. Richer diamond deposits that were easier to excavate were found elsewhere in 1928, effectively surceasing the town’s growth and ushering in the exodus. Since 1954, not a soul has lived here—just some stunted shrubs and desert succulents. 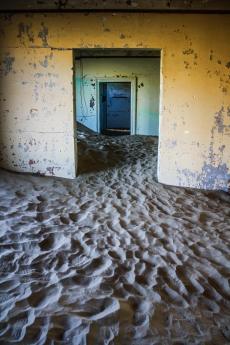 Strolling around the town and its German architecture today is a fascinating experience. The lush gardens with manicured lawns, rose beds, and eucalyptus trees that assuaged the severe environment have long vanished, and the rail tracks, save for isolated stretches of what look like parallel snakes, are now almost completely hidden under the sand, but the remains of once handsome structures still stand in defiant beauty. I explored the homes of the town’s architect, teacher, doctors, and mining managers, noting the occasional fireplace, built-in bookcase, and concrete bathtub. A flash of glazed cobalt-blue tile appears just above the top of a hill of sand that has infiltrated an interior space; staircases lead up to second stories becoming increasingly vulnerable to the elements as roofs slowly decay; cracking paint and fading wallpaper and stenciling flake from the walls. Early morning and late afternoon, when the sun is at its lowest angles, are particularly wonderful times to visit, when this ghost town comes to life in an amber glow.

The entire state of Montana seems to be littered with ghost towns. In Big Sky Country, one of the best preserved ghost towns is found at 6,000 feet above sea level, at the end of a twisting, steep, dusty, pitted dirt road marked by hairpin turns and potholes that will challenge the most experienced driver—and that’s off limits in winter: You’ll have to take a snowmobile or cross-country ski trip to get here. Originally called Mitchell when it was founded in the 1860s, the town changed its name to Garnet after that ruby-red semi-precious stone was found nearby. But its rise depended on the gold that was found soon after. By 1898, about 1,000 people lived in this town, with four hotels, two barber shops, mercantile and food stores, a school for 41 students, a jail, livery and butcher shops, and 13 saloons, including one that offered “male-orientated” entertainment—many of which still remain, despite more than a century’s worth of neglect and harsh winter conditions. When the gold ran out by 1905, people began to leave in droves. After a devastating fire in 1912 destroyed half the town, only a few stragglers remained. Although a brief resurgence in mining in the mid-1930s brought a little life back to Garnet, World War II siphoned off its population. The post office closed in 1942, and everyone was gone by 1948. Constructed in a haphazard manner, the two dozen buildings that remain today, including a saloon, the J.K. Wells Hotel, cabins, and outhouses, and the cast-off items inside them—pots and pans, stoves, cans of cooking oil, rocking chairs, coffee pots, wash basins—cohere into a sepia snapshot of a typical American Old West boom and bust town.

Elkhorn, Montana, is a rather unique ghost town in a couple of ways. Founded in 1872, Elkhorn grew up around the local silver, gold, and lead mines. During the 1880s, the population had spiked to 2,500, and by 1900, miners (aided by 1,500 mules) had extracted 8.9 million pounds of silver, four million pounds of lead, and almost nine thousand ounces of gold. A drop in silver prices ushered in the ineluctable decline in population. A diphtheria epidemic and the later termination of railroad service exacerbated the town’s moribund status. By the 1970s, its population was zero. Unlike most mining towns, Elkhorn had been inhabited by families of married European immigrants rather than lots of single randy American men looking to strike it rich in a freewheeling Wild West town. The town had a school, hotel, church, grocery store, and shoemaker’s shop, but it wasn’t completely innocent: saloons and brothels rose up here, too. Today, many of these structures still stand among the remnants of the mine’s outbuildings. The two most substantial buildings, Fraternity Hall, constructed for social gatherings, and Gillian Hall—both fine examples of frontier architecture—became Elkhorn State Park in 1980; the rest of the town is private property. I wandered around this little forgotten pocket of former civilization completely alone, silent except for some weeds rustling in the breeze and the occasional call of a bird of prey. As I made my way among rusting machinery and automobiles, the cabins with sagging roofs, the tilting doctor’s office, and the sun-bleached facades of wood homes with brick chimneys, I heard the sounds of construction. Intrigued, I followed the noise to a cabin where a trio of men in hard hats was working with hammers and drills. Unlike other ghost towns, Elkhorn is apparently being resurrected. As of today, it has a new population of 18. 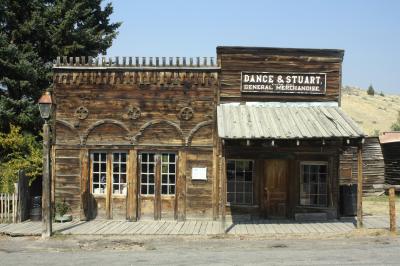 The easily accessible Virginia City, flanking both sides of Highway 287, is a ghost town that was never a true ghost town. The city boomed immediately after the 1863 discovery of gold nearby and was named capital of the Territory of Montana a year later, until 1875. Despite its small size—its population never hit 700—Virginia City had all the trappings of a much larger city, including among its 300 buildings a brewery, opera house, cemetery, trading company, general merchandise store, toy shop, candy shop, boot store, stagecoach vendor, wagon shop, saloons, Wells Fargo office, inn, Chinese laundry, bakery, Masonic temple, furniture store, and Montana’s first newspaper, first public school, and first permanent bank. Old wood boardwalks still abut the entrances to many of these buildings, some of which have been restored. The population began to decline fairly steadily after 1890, falling to below 200 in 1960 and hitting a low mark of 130 in 2000. But Virginia City was never completely abandoned because the gold never entirely ran out, which enabled it to sustain homes and businesses but did not provide enough wealth to remodel or rebuild. As a result, it remains an Old West Victorian town frozen in time but not completely forsaken. Most of the city was made a National Historic Landmark and is now operated as an open-air museum by the Montana Historic Commission. Functioning restaurants and shops help support the local economy—and the town’s 198 citizens. Despite that modern surge, you can still easily wrap yourself in the history of this place and imagine, without too much of an effort, what Virginia City was like more than a century ago, when John Bozeman (founder of the Bozeman Trail and Bozeman, Montana) and Calamity Jane walked along these same streets, and when a drunken Jack Slade, co-founder of the Pony Express, was lynched here in 1864 by local vigilantes for disturbing the peace.