With a history that spans more than 400 years, the city of Albany is bound to reveal its age through a wide variety in the inventory of its built environment. During my few days here, I inevitably found myself in the downtown area of New York’s capital at some point every day. Whether I was heading to dinner at Albany Pump Station or Jack’s Oyster House, picking up some snacks at the farmer’s market, or attending a cancer survivor event, I would ultimately end in the vicinity of Empire State Plaza, a not-so-successful urban renewal project, in search of the city’s most beautiful buildings. These are my favorites.

#1 Cathedral of the Immaculate Conception 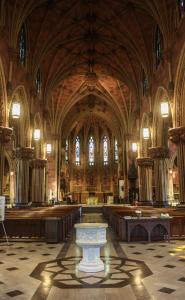 Atop the list of the five most beautiful churches in Albany, the Cathedral of the Immaculate Conception also scores as the most beautiful building overall in the New York capital. The cathedral boasts an impressive historical record as the first American Catholic cathedral built in the neo-Gothic style, the second-oldest cathedral in New York (after St. Patrick’s in New York City), the third-oldest in the United States, and the tallest building in Albany when construction ended in 1852. Added to the National Register of Historic Places in 1976, the cathedral escaped the wholesale razing of the surrounding neighborhood to create Empire State Plaza and stands in stark contrast to the banal modernist office towers across the street. The brick, sandstone, and plaster cathedral occupies a corner lot and features two spires that top out at 210’. I entered the magnificent interior through the middle of three portals and was immediately drawn to the exceptional sculptural arrangements of the Stations of the Cross, which won the Gold Medal at the 1888 Paris Exposition. There’s plenty more to be awed by, especially the seemingly international effort to beautify the space: The Last Judgment Window was made in England, the oak high pulpit was hand-carved in Holland, and the oak choir stalls were carved in Belgium. You’ll also find a Caen stone baptismal font and the regal cathedra — the bishop’s chair. Clustered columns with heavy capitals of organic motifs, including lots of grapes, grape leaves, and grape vines, support the vaulted ceiling with heavy bosses. The cathedral also holds my favorite depiction of Palm Sunday, a stained-glass window displaying the full spectrum of colors.

Unlike any other state capitol in the United States, the New York State Capitol in Albany is one of the country’s top five capitols. Because it took so long to build (1867 to 1899, when it was dedicated by then-Governor Theodore Roosevelt), it’s a mix of architectural styles that somehow blend seamlessly. Built for a whopping cost that exceeded $25 million (more than the U.S. capitol), the five-story granite building features a central section with two connecting sections that link to corner towers with pyramidal red roofs, best viewed from the center of Empire State Plaza before it. Overall, it could be mistaken for an enormous French chateau, with its dormer windows and clusters of chimneys. Inside, the surprisingly dark interior was a little disorienting; there’s no grand open space or clearly articulated or instinctive routes to follow, as in many other capitols. Instead, I got to discover lots of wonderful treats along the byzantine layout, survivors of the 1911 fire that consumed a large part of the building as well as what was, at the time, the nation’s fifth-largest and the world’s 12th-largest library. Three grand staircases beckoned me to start climbing: the Moorish- and Gothic-style Assembly Staircase, with a huge skylight; the other Moorish- and Gothic-style Senate Staircase, made of Scottish sandstone, with a glassless rose window in the most unexpected place, and bas-relief carvings of plants, fish, turtles, and mythical animals, and granite owls carved into a column capital; and the most elaborate, the four-pronged Great Western Staircase, designed by the incomparable Henry Hobson Richardson. Made of warm–rose-colored stone and brimming with ornate lampposts (this was one of the first public buildings in the United States to employ electricity), this staircase features fantastic hand-carved sculptures of 77 governors, presidents, explorers, poets, and soldiers, including Civil War heroes Abraham Lincoln and Ulysses S. Grant, all found hidden among column capitals, along the walls, and at the bases of arches, along with additional unidentified faces (probably friends of the carvers) used to fill in the ornamentation, no pattern of which is repeated. Countless arches and windows line each floor, and you’ll enjoy hunting for some fine details like an eagle and the New York State coat of arms. The Senate Lobby has a beautiful Victorian-tile floor; the Minton tile floor in the Upper Senate Corridor is just as nice. There’s also an impressive Moorish-Gothic–style Assembly Chamber, the largest room in the building, with stained glass, and brass and alabaster chandeliers, and the Governor’s Reception Room, with fantastic murals on the curved ceiling depicting important events in New York State military history, such as the battle between English and Dutch colonists fighting for control of the region. As if this capitol wasn’t already unique, there’s a Dunkin’ located inside.

Just a couple of blocks up from the Hudson River, the palatial former Delaware & Hudson Railroad Company Building dominates the foot of State Street — and is often mistaken for the state capitol by not-so-well-informed visitors. With a design based on part of the Cloth Hall in Ypres, Belgium, the railroad’s headquarters was constructed in sections between 1914 and 1918, and the result was a huge and spectacular edifice. A central 13-story tower anchors the asymmetric Gothic building, which runs more than 600’ long. From there, the older north arm and the more ornate south arm lead to additional towers, the southern one functioning as the headquarters of the Albany Evening Journal, whose editor just happened to play poker with the architect, the president of the D&H, and the Republican political boss of the city. After both organizations decamped from the building, it remained vacant until the State University of New York (SUNY) purchased it as its central administration offices, renovated it, and moved in in 1977, five years after the building was added to the National Register of Historic Places. In a fairly selfish gesture (not quite so shocking, giving the cabal of the original foursome who put together the building), the SUNY chancellor made the top four floors of the southern tower his rent-free residence. I managed to talk myself inside despite not having a SUNY ID to check out the long halls with beautiful columns with floral capitals and with ribbed groin vault ceilings covered in herringbone-patterned tiles. But the real beauty is found outside. Decorated windows, finials and crockets, turrets, gargoyles, and cinquefoil arches add tremendous flair to what was basically an office building. Plenty of flourishes acknowledge the history of Albany that transcend the railroad company and the newspaper. Way atop the central fleche, an eight-foot-tall working copper weathervane replicates Henry Hudson’s ship, Half Moon. Stone beavers appear between the dormers of the north wing; gables along the south wing bear coats-of-arms of key Dutch families, including that of the city’s first mayor. Stone reliefs of the names and dates of important figures in the history of print can be found on the façade as well as the crests of Hudson and of European royalty, and the seals of the city and state. Prescient to SUNY occupying the building, there’s a small stone owl a few stories up, and a particularly stern-looking bespectacled taskmaster pointing to a page in an open book. And if anyone could explain the bizarre figure attached to the corner at the very southern end of the building, I’d love to know the meaning of the lion-demon being wearing something Madonna might have donned in her prime, with its legs suggestively spread and apparently giving birth to a reptilian creature.

Designed in the Romanesque Revival style by a local architect, St. Mary’s Roman Catholic Church went up in 1870 and still stands as one of the top five churches in Albany. Shortly after, electric lighting was installed — the first among the city’s churches. The 175′ open bell tower was added in the late 1870s, topped by a statue of St. Gabriel the Archangel, blowing a trumpet and functioning as a weathervane. Inside, an upper-story horseshoe-shaped gallery running around the sides and back, supported by clustered columns, opens up the space, giving ample breathing room and the chance to view the ornate ceiling close up. Two angels flank a clock from 1797, and the Baptismal font is made of white carerra marble, pewter, and silver. The Stations of the Cross, carved in Bavaria and dating from 1862, ring the walls between fine stained-glass windows and excellent murals and contain a little secret: If the plaques with the English descriptions at the bottom of each Station were to be removed, the original German would appear. 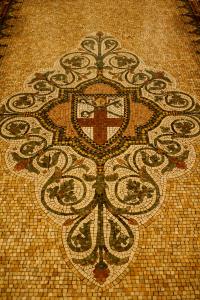 One of my favorite architects, the great Richard Upjohn, designed the lovely St. Peter’s Episcopal Church in the French Gothic style in 1876. The asymmetrical façade of this National Historic Landmark and one of Albany’s top five churches features a rose window designed by Tiffany in 1890 and a 180′-tall tower with turrets, three-ton gargoyles, and three lancet windows on each side, gracing State Street, downtown Albany’s main drag, with one of its most striking buildings. Inside, a series of arches sustain the clerestory, rising from octagonal stone columns. Above, a beautiful wood ceiling is a masterwork of tracery, and the vivid stained-glass windows bathe the interior in colorful light. My favorite feature unfolded beneath me. The gorgeous mosaic flooring throughout the church bears both straight-out messages (“I am the vine, ye are the branches” and the Ten Commandments) and elaborate Christian symbolism, such as an anchor (representing hope), a pelican (redemption), and a lamp (good works), as well as shields holding the traditional symbols of the 12 apostles and of St. Stephen, David, St. Paul, and Moses.