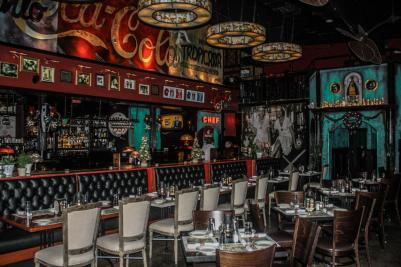 In the bustling, newer-every-day Brickell area of Miami, Havana 1957 bucks the trend and focuses on yesterday. I had the option of dining at this restaurant outside, hidden from pedestrians along the sidewalk by a wall of thick plants, sitting under strings of white lights and listening to Cuban music. But indoors beckoned, for as soon as I stepped inside, I was instantly transported back to the Cuban capital half a century ago, and I was quite sure that the restaurant would make good on its promise of “Un Día en La Habana.”

A sign for the Tropicana night club hangs above turquoise walls decorated with framed baseball jerseys and promotional ads for visiting the island when it was a sizzling-hot destination for celebrities and jet setters. Photos of Cuban stars like Celia Cruz mix in with religious statues and tall votive candles. It all sets the mood for a throwback to Havana’s pre-Communist glory years. And, after you’ve enjoyed a truly excellent meal, if you want a more tangible recollection of Havana 1957 besides a warm memory, you can pick up a souvenir or two, like a set of dominoes or a dice box, or some cigars from…until that embargo is fully lifted…Nicaragua or the Dominican Republic.

Try This: As you start to snack on some slightly salty plantain chips, quench your thirst on a sultry Miami night with a raspberry mojito with Bacardi Razz, sugar cane, and yerba buena. Then begin to experience traditional Cuban flavors with a tamal en hoja (cornmeal with seasoned pork wrapped in a corn husk and served with onion sauce). For your main course, try the chicken marinated in citrus juice, garlic cloves, onions, and bell peppers, with a criolla sauce with raisins and olives, surrounded by sides of white rice, sweet plantains, and black beans. And before you head off to one of the city’s glitzy night clubs, caffeinate yourself with some strong Cuban coffee and a slice of wonderfully original guava cheesecake.