My brother and sister-in-law were debating if they should order shots of Jägermeister, even though that didn’t sound particularly Namibian. But, this potent digestif made with 56 herbs and spices is billed as “the house wine” of Joe’s Beerhouse, and given the German influence that endures from the country’s colonial days, it wasn’t really that surprising.

While they were waffling, I was eyeing the menu with much curiosity. I was staring at offerings I had never seen before, anywhere in the world. My appetite increased quickly, teased by what sounded like incredibly delicious choices, but laced with a soupçon of apprehension. Did I really want to consume animals that I was going to be seeing and photographing and marveling at in the wild over the next two weeks? I pivoted back and forth until the waitress arrived.

“I’ll have the butternut soup, zebra loin steak with garlic butter, chips, and a Namibian lager.”

It’s a sentence I never could have imagined uttering. But, then again, I had never been to Windhoek, Namibia, before.

Our dinner recommendation came from our hosts at the wonderful Villa Vista Guesthouse, a pleasant 15-minute stroll away through a quiet residential neighborhood just on the fringes of the heart of the capital city. Joe’s Beerhouse has been a Windhoek institution since 1991, and we knew we were going to be treated to something special as soon as we arrived.

Gravel paths lead you along the maze of indoor and outdoor seating to five distinct sections that strike a pronounced German-African blend, including the very German biergarten with a koi pond. You may be seated at a bench with a long table with miners’ lanterns, next to a brick fireplace, that reminds you of a German beer hall, until you notice the thatched roof above you and the fake rhinoceros head attached to the wall. Or you may feel comfortable in a canvas chair around more intimate circular tables. Or you can belly up to the bar and occupy a barstool, or perhaps a (gratefully) nonfunctioning and disconnected toilet bowl with the lid down. If you’re accustomed to fine linens and crystal glasses at your restaurant, you may need a minute to recover. 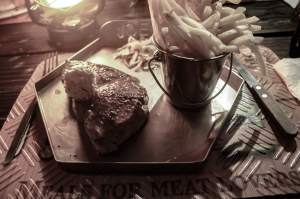 No matter where you sit, you’ll be one of 600 people the restaurant can accommodate. And although that sounds like tourist central, it’s not: Joe’s is a favorite with Namibians, too, and everyone blends together seamlessly, aided by the service of a staff of about 110.

All around you, disparate objects hang from the walls and roofs: a congeries of flowerpots, bundt pans, ropes, barrels. A German street sign for Kaiser Wilhelm Strasse is strapped around a palm tree. Sunflowers, empty cans of sauerkraut, skulls of antlered animals, bicycles, a collection of steins, and locally woven baskets contribute to the visual chaos.

Founded by Joachim Gross, a master chef with global experience, from Germany to Asia to the Bahamas, Joe’s Beerhouse has grown over the years, and its new owners have introduced heightened levels of wackiness while always maintaining the high-quality menu.

That menu includes many of the animals we were here in Namibia to see in their native habitat. For instance, after some debate, my brother decided on a combination platter of oryx, springbok, and kudu. If you’re reluctant to try exotic game meat, that’s understandable. But put aside your doubts; this is some of the finest food I’ve ever had in my entire life. And trying unusual food in unusual places is one of the top five things to do in Namibia. If you truly can’t get beyond it, or if you’re a vegetarian, don’t fret: There are plenty of more familiar items, like beef and chicken and oysters, as well as salads and vegetarian entrées for you to choose from, so you’ll still be able to enjoy the uniqueness of this famed eatery without going hungry. And you can put some trepidations aside: Lion, giraffe, and elephant are just a few of the animals that do not appear on the menu.

Getting back to that zebra steak… I did feel more than a little guilty about ordering it. After all, zebras are one of my favorite animals, and I had spent a good deal of time and money planning this trip to Namibia to see them in the wild. And now one was on my plate (and, by the way, it was fantastic — tender, juicy, and not at all gamy). About a week later, I was much relieved to learn that some zebra are raised for consumption. It made that once-in-a-lifetime meal (never to be seen again, no matter where I went in the country) even more satisfying.

It’s this combination of delicious and authentic food, a rustic and casual ambience, and truly amusing and quirky décor that makes Joe’s Beerhouse so unforgettable. In a place where the everyday becomes extraordinary, where bizarre is normal, and where the unexpected completely captivates you, Joe’s Beerhouse is, in many ways, a true microcosm of Namibia itself.