The brick streets that I was strolling along on harkened back to an earlier era. The old brick warehouse buildings and old-fashioned lampposts supported the notion that it was 1920 instead of 2020. I had arrived in Old Town, a compact area of downtown Wichita, Kansas, that would serve as my home for a few days while I stayed at the wonderful Hotel at Old Town. 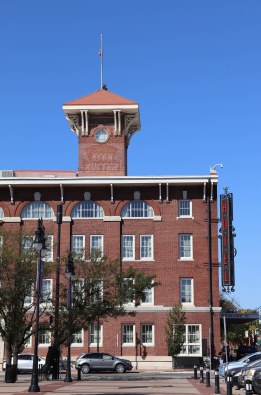 The old cupola with the building’s original name honors the hotel’s history.

In its former life, Hotel at Old Town was the city’s largest warehouse, built in 1906 for the Keen Kutter brand of tools, silverware, dishes, and sporting goods. The state-of-the-art construction made the four-story warehouse not only the strongest building in Wichita but also a virtually fireproof one, with watertight floors, corbled walls that slowed air currents, and a rooftop cupola containing 20,000 gallons of water.

The redevelopment of the warehouse into the hotel is indicative of the resurrection of the entire 20-block Old Town area, which developed in the 1870s as a collection of warehouses that utilized the rail lines that connected Old Town to Chicago, St. Louis, and other major eastern markets. By 1911, Wichita was the second-largest distribution point for agricultural implements in the United States. That all changed with both the rise of interstate trucking that clobbered the rail business and the construction of new warehouses on the edges of the city. As a result, buildings in Old Town were shuttered, and vacancy rates skyrocketed to 70 percent.

The area was rescued from total abandonment in the late 1980s and early 1990s by some creative urban planning strategies, including mixed-use development and the nation’s first environmental tax increment financing district that bypassed federal Superfund assistance in lieu of city fiscal responsibility to clean up the groundwater contamination in the area.

Enjoy breakfast or a music-filled evening in the airy atrium.

Now, old warehouses, industrial buildings, printing and publishing shops, and mechanic’s garages have been reimagined as businesses, restaurants, apartments, and stores. One of these successful conversions was the Hotel at Old Town. Decades after the Keen Kutter warehouse had closed, hotelier Jack DeBoer (founder of Residence Inn) saw an opportunity to create some magic. And in 1999, the new hotel opened, with his vision realized.

After a quick check-in, I rode the elevator (piped with Frank Sinatra tunes) up to my floor. Archival photos of early Wichita line the whitewashed brick walls, and showcases feature collections of some of the old Keen Kutter items, such as scales and meat grinders. Although the hotel stresses its history, it does not do so at the cost of modern conveniences. Rooms are equipped with high-definition televisions, free WiFi, Egyptian cotton bedding, down blankets, and full kitchenettes. Bathrooms are spacious, stocked with high-end toiletries. The hotel does give a nod to the past, however, with a fully functioning rotary-style push-button telephone that looks like it’s a century old.

The hotel offers a breakfast buffet in the airy atrium lobby, where you can enjoy, for example, orange juice, scrambled eggs with cheese, spicy potatoes, bacon, sausage croissant sandwiches, cinnamon rolls, and fresh blueberries, cantaloupe, grapes, and honeydew while gazing at the soothing fountain and the brick wall that rises to the ceiling, adorned with balconets and sconces at the curtained doors of the guest rooms facing in.

Amid your room’s modern conveniences, signs of last century.

If you choose to venture out for your morning meal, you’ll be grateful for another of the hotel’s great assets — its terrifically convenient location. Just down the block, Egg Cetera serves up an excellent breakfast, and the weekly farmers market is right across the street in the Farm and Art Plaza, which itself is anchored by the Museum of World Treasures, an oddball and quite interesting collection of everything from dinosaur bones and Roman coins to the history of the U.S. presidency and the fall of the Berlin Wall. At night, several dinner options, including the lovely Larkspur Bistro & Bar, are only a few minutes away by foot, and the recently built Warren Old Town Theatre could be your destination for a movie night (or, if you time it right, for the annual Tallgrass Film Festival), in an eye-catching Art Deco motif.

Should you choose to drive to anything farther afield, parking when you return to the hotel is made easy by the complementary garage next door. And if you decide to remain in, you can head down to the intimate piano lounge in the lobby, settle in for a drink or two at the bar, or enjoy the live jazz on weekend evenings. But no matter how you spend your days and evenings in Wichita, Hotel at Old Town is where you want to return to every night.