My long weekend in the largest city in Maryland started when I checked into the terrific Hotel Monaco, housed in the old headquarters of the B&O Railroad, one of the top five buildings in Baltimore. With this as my base, I was within easy walking distance of many of the top things to see and do in this city that was founded in 1729. These are my favorites. 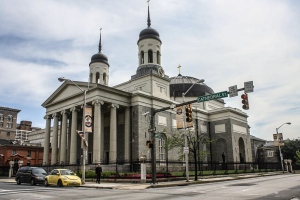 Located atop a hill above Baltimore Harbor, the Basilica of the National Shrine of the Assumption of the Blessed Virgin Mary (more handily called the Baltimore Basilica) is a major magnet for all kinds of people: Catholics, architects, historians, or anyone who just enjoys a gorgeous building. Completed in 1821 as the first Roman Catholic cathedral constructed in the United States and the country’s first archdiocese (from which two-thirds of U.S. Catholic dioceses can trace their heritage), it was promoted to a minor basilica in 1937, listed on the National Register of Historic Places in 1969, declared a National Historic Landmark in 1971, and designated a National Shrine in 1993. The handsome silver-gray gneiss façade features a pair of cylindrical towers and a wooden double-shell dome. I passed under the Greek portico with fluted Ionic columns and entered the neo-classical building, following in the path of such illustrious figures as Ralph Waldo Emerson, Andrew Johnson, Mother Teresa, Alexis de Tocqueville, Pope John Paul II, and the Marquis de Lafayette. The simple, very bright, elegant, and understated interior represents the architect’s and diocese’s vision to not have it resemble its grander European predecessors. Against cream-colored walls, the Four Evangelists get a symbolic treatment on fields of a striking blue. Small, saucer-shaped secondary domes surround the tremendous main dome, with a white dove against a gold background in the oculus and its ceiling accented by plaster rosettes in coffered medallions and panels. Make sure to head downstairs to visit the chapel and the quiet crypts that contain the remains of the first bishop of the United States. You’ll definitely want to see the fantastic brickwork of the arches and herringbone-pattern floor.

#2 Be Inspired by the Works at the Walters Art Museum

I thought this would be my secondary museum, with the Baltimore Museum of Art being the top draw (both of which generously offer free admission). As it turned out, the Walters Art Museum emerged as my favorite. Opened in 1934, the Walters has a vast collection of art largely amassed by a father-and-son team of art and sculpture collectors; junior was the one to arrange for the erection of the palazzo-style structure (Parisian on the outside, Genoese on the inside) that would house his family’s 22,000 treasures for public display. Ranging from 5000 BC to the 21st century, the 36,000 objects originate from every corner of the globe. From the ancient world, you can view Egyptian statues, Assyrian alabaster reliefs, Greek sculptures and jewelry, and Roman sarcophagi. The ancient Americas are well represented, too, with stone and pottery pieces from the Aztec and Maya cultures as well as nearly 100 gold artifacts from western Panama. The Asian collection includes Japanese porcelains and lacquers, Cambodian and Indian bronzes, Tibetan knives, one of the world’s largest and finest collections of Thai banner paintings, bronze, and scrolls, and the world’s oldest Chinese wood and lacquer image of the Buddha. Islamic art encompasses bowls from Persia, Turkish tile, silk from the Mughal Empire, parts of a ninth-century Qur’an, and a host of manuscripts. The huge European collection includes Renaissance, Baroque, and 18th- and 19th- century paintings, furniture, ceramics, metal works, snuffboxes, watches, Art Nouveau jewelry, and sculptures. The museum’s medieval European art collection is one of the best in the United States, replete with stained glass, textiles, paintings, enamels, reliquaries, and such religious objects as icons and illuminated manuscripts.

Indeed, the religious art housed in the Walters is truly astounding. Byzantine, medieval, Gothic, and Romanesque objects cover a wide array of media and regions, including the ivory piece of the stoning of St. Stephen, from eastern Belgium (circa 1100), the largest and finest collection of art of the Ethiopian Orthodox Church outside Ethiopia, altarpieces and triptychs, and sculpted heads from the Abbey of St. Denis. The knight’s hall is filled with armor, and the central atrium is given over to a European sculpture court on the first floor and a fantastic collection of ceramics on the second floor, including one of the world’s top five depictions of Adam and Eve. 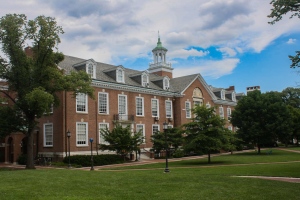 Just a short bus ride from downtown, Johns Hopkins University has been attracting visitors and brilliant students for over a century. This private institution of higher learning was founded in 1876 and named for its first benefactor, who left a $7 million bequest (that’s the equivalent of $147.5 million in today’s dollars — the largest philanthropic gift in the history of the United States at that time), to fund a university and hospital. Considered the first research university in the country, Johns Hopkins spent about $2.5 billion on research in 2016 alone. Where is all this research taking place? Aside from graduate campuses in China, Italy, and Washington, D.C., it’s at this main campus in Baltimore, and what a beautiful campus it is. Originally a private estate called Homewood that was the property of a signer of the Declaration of Independence, the university acquired the land in 1902. The Homewood House, from 1801, still stands, serving as both an on-campus museum and the inspiration for the Collegiate Gothic architectural style of the campus. Brick buildings with white trim and towers, lots of grassy lawns, and interconnecting walkways and colonnades combine to achieve a cohesive look. The flagship building, Gilman Hall (from 1915, named after the university’s first president), features a columned portico, mansard roof, and a domed tower, and houses an archaeological museum. The old dairy cattle barn is now home to the theater arts program. Occasionally, a rabbit or two will hop by you before ducking under some shrubbery. As I strolled around, I gained a greater appreciation of the place that launched the oldest U.S. university press in continuous operation (in 1878), the first school of public health, and the first medical school to admit women on an equal basis with men. You don’t have to be a student translating ancient German manuscripts or becoming a robotics expert to truly appreciate the beauty of this wonderful college campus. 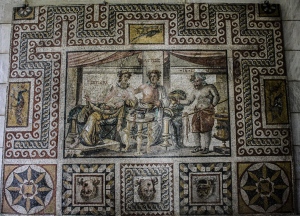 Within walking distance from Johns Hopkins, the Baltimore Museum of Art has been operating for more than a century. Opened in 1914 and housed in its current neoclassical building since 1929, the largest museum in Maryland boasts a collection of 95,000 objects, including a massive inventory of works by Henri Matisse and one of the finest holdings of drawings, photographs, and prints in the United States. Spread over three floors, galleries showcase art from around the world: African ceremonial weapons, figures, headdresses, jewelry, masks, pottery, and textiles — one of the first collections of African art in a U.S. museum; Asian art from China, India, Japan, the Near East, Southeast Asia, and Tibet; object from the Pacific islands that include carvings, jewelry, ornaments, and textiles from Melanesia, Polynesia, the Easter Islands, Hawaii, Fiji, and Tonga; and ancient American works from Aztec, Maya, Muisca, and Nioya civilizations that date back to 2500 BC. You’ll also find textiles from around the world, and American and European paintings, sculpture, and decorative arts as well as several period rooms that were replicated from half a dozen historic houses in Maryland before they were razed. You’ll also find a generous display of works by such artists as Cézanne, Degas, Gauguin, Renoir, and van Gogh. For me, the best thing to see is the 28 Antioch mosaics, displayed around a sunlit atrium. These gorgeous pavements were discovered in southeastern Turkey in the 1930s and date from the reign of Hadrian in the second century to the rule of Justinian in the sixth, created before the ancient city was destroyed by earthquakes in 526 and 528. Their grand scale, elaborately patterned borders, elaborate rinceaux, finely detailed figures, and brilliant decorative and naturalistic effects will make an indelible mark in your memory of this museum. 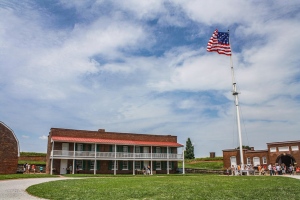 I hopped on a bus on one of the four free Charm City Circulator routes for a couple of miles to the end of the line at Fort McHenry. Named after James McHenry, a Scottish-Irish immigrant and surgeon solider who was also a signer of the U.S. Constitution and the U.S. Secretary of War under George Washington and then John Adams, Fort McHenry is a bastioned pentagon surrounded by a dry moat. Built between 1798 and 1800 on a peninsula that forks the Patapsco River that leads into Chesapeake Bay in order to bolster the defenses of the strategic port of Baltimore from enemy attacks, its mission was realized almost immediately, during the War of 1812, when the fort achieved its greatest accomplishment. For 25 continuous hours beginning on September 13, 1814, British warships bombarded the fort, resisted by returning cannon fire. With the British ships at maximum firing range from the fort and somewhat poor accuracy on the side of the Americans, very little damage was done to either side, and loss of life was minimal. By the end, the British had depleted their ammunition and their attack was a failure. For the Americans, it was a resounding victory that left Baltimore safe — and that gave the United States its national anthem. When a huge 30’ x 42’ American flag was raised at the end of the battle to signal the American victory, Francis Scott Key, a lawyer who was negotiating the release of a prisoner of war aboard a nearby truce ship and who had been witnessing the bombardment, was so moved that he immediately began to compose the poem “Defence of Fort M’Henry,” which was later set to music and became “The Star Spangled Banner.” Since then, the fort was used continuously by the U.S. armed forces, serving as a military prison and the site of artillery training during the Civil War. The fort added 100 buildings (now gone) to serve as one of the largest military hospitals in the country for troops returning from France during World War I (housing 3,000 soldiers, tended to by 1,000 staff) and where the staff made advances in neurosurgery and reconstructive surgery. The Coast Guard used it as a base during World War II. Designated a national park in 1925, it was bestowed with the distinction of National Monument and Historic Shrine in 1939 — the only place in America to hold that title — and then added to the National Register of Historic Places in 1966. 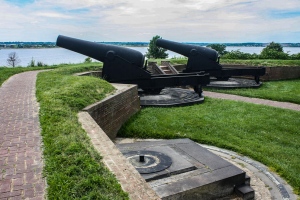 So, what is there to see here? Your visit may start with soldiers in 1800s uniform marching down the herringbone brick path through the sally port of the fort as part of a historical reenactment. You can check out some of the old Civil War prison cells; explore the parade grounds, quarters, and barracks; step inside the exceptionally thick walls of the powder magazine with its barrels of gunpowder; learn how the original cannons were loaded and fired (by mock soldiers in authentic garb); and stand beside those cannons atop the parapet, aimed into the harbor, and imagine the scene from more than two centuries ago that gave birth to those lyrics about the land of the free and home of the brave. As for that 15-star and 15-stripe flag that so inspired Key, the original is still here for viewing. It also started a national tradition of flying any new American flag over Fort McHenry before anywhere else. Although that hasn’t happened since 1959, when Hawaii became the final star in the current flag, if anything changes, you’ll see it here first.