I once saw St. Lucy. Not while she was alive, of course—she died in the Sicilian city of Syracuse in 304. Her body, however, lies enshrined in the Church of Sts. Jeremiah and Lucy in Venice, Italy, and I made sure to visit her to give thanks for my eyesight. After all, she is the patron saint of the blind and visually impaired (along with a host of other groups, including authors, peasants, salesmen, and stained-glass workers).

The legend of St. Lucy and her association with sight is a bit sketchy. Born to a rich family and left fatherless when she was five, Lucy was arranged to be married to a wealthy pagan by her mother, who was unaware of Lucy’s decision to consecrate her virginity to God and distribute her dowry to the poor. Lucy’s betrothed wasn’t exactly thrilled by either of her choices, so he promptly denounced her to the governor of Syracuse, who ordered her to burn a sacrifice to the Roman emperor’s image. Lucy refused, so the governor sentenced her to be deflowered in a brothel. When guards came to take her, however, they could not move her, even after they hitched her to a team of oxen. Frustrated, they tried to set her on fire, but she would not burn. Finally, a sword thrust into her throat ended her life. It wasn’t until the 15th century, however, that Lucy’s association with sight developed, and accounts begin to conflict. One narrative holds that she was tortured by the forceful removal of her eyes; another states that she herself gouged out her own eyes to discourage a persistent suitor who admired them; and still another says that when her body was being prepared for burial, it was discovered that her eyes had been miraculously restored.

Whatever the truth may be, she has long been associated with sight and, as implied by her name, light. Her feast day, December 13, is highly appropriate, as winter begins and days in the northern hemisphere darken earlier.

In artwork around the world, St. Lucy is usually portrayed with a couple of recurring symbols, none more notably than her own eyes that she holds in her hand. These are my favorites. 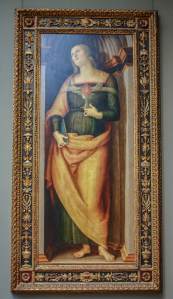 Lucy’s symbols most commonly featured include a cord, removed eyes, a lamp, swords, and a palm branch. Her associated colors include red, white, and blue. My favorite depiction of St. Lucy, however, has none of them. Begun by Filippino Lippi in 1502, completed in 1507 by the Italian artist Pietro di Cristoforo Vannuci (aka Perugino) following Lippi’s death, and at home in the Metropolitan Museum of Art since 1981, Saint Lucy was part of double panel (along with St. John the Baptist) for a huge altarpiece in a church in Florence, Italy. She’s not completely devoid of symbolism, though. She stands in a half-domed niche, barefoot (signaling her willing desire to part with her worldly goods, giving away during life what one often gives away only upon death). She wears a robe of green (not one of her normal colors), but it’s partially covered by a cloak of yellow (definitely one of her colors, representing light). Lucy holds a book (rather unusual) with one hand, but the other hand holds a cup from which flames rise (a more common element). Noted for subdued coloring and subtle treatment of light, this painting portrays her looking heavenward, eyes intact, perhaps acknowledging her sacrifice to her higher power.

#2 Church of the Most Precious Blood (New York, New York) 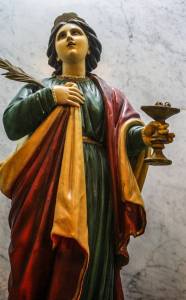 Inside the Church of the Most Precious Blood in New York’s Little Italy, the statue of St. Lucy is one of many saints venerated in this parish. Like Perugino’s Saint Lucy, this Lucy wears a green robe, also with a yellow cloak (with some red thrown in, the color of martyrs). Unlike her contemporary, however, this rendition features the three most common symbols—a palm branch (representing a martyr’s victory over evil), a pair of eyes resting in a chalice, and a small palm branch. She, too, has her face turned upward, in a bit of religious ecstasy, but her eyes look lifeless, the pupils and irises a barren black. Yet, somehow, they’re not expressionless, which makes this version particularly striking. 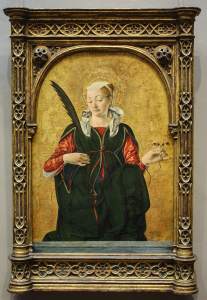 I was starting to wonder if green should be an associated color for St. Lucy, because in this Saint Lucy, by Francesco del Cossa, once again that’s the color of her robe. It covers a red dress, with a collar of white (symbolizing her purity). Originally commissioned for a family chapel inside a church in Bologna, Italy, del Cossa completed the painting in 1474. Now part of the collection at the National Gallery of Art, this Lucy features a subtle halo encircling her head, and she holds a palm branch in one hand. The highly unusual treatment of her gouged eyes here is unique. Whenever her eyes do appear in art, I’ve seen them only on a plate or chalice. Here, they appear as if they’re two flowers emerging from sepals at the top of a plant stem that Lucy holds in her other hand. It’s an intriguing deviation from the norm, as is her position—she’s kneeling. Her gaze is equally arresting—she looks downward at her second set of eyes, not with an expression of regret or anger, but rather one of pride and acceptance, presenting her eyes—and, by extension, the gift of sight—as something to revere. 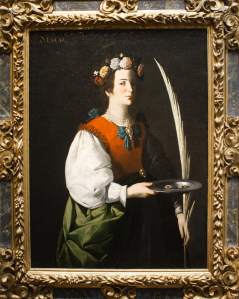 The National Gallery of Art scored another winning depiction of St. Lucy when it acquired Saint Lucy, completed circa 1630 by Spanish painter Francisco de Zurbarán, in 1943. This elegantly clad and bejeweled Lucy, her hair carefully coiffed underneath her floral wreath, wears fine clothing of red, white, and green, and sports expensive jewelry, including a brooche with a dew-drop pearl. She holds her palm branch in one hand, her eyes on a pewter plate in the other. Zurbarán’s use of light and darkness here is engaging. Most of Lucy’s body and face is bright, but parts are cast in shadow—the artist’s nod toward Lucy’s association with light. 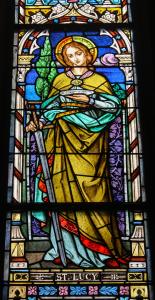 Although St. Mary Basilica was completed in 1886, it didn’t receive its 16 stained-glass windows until later on, in two batches, one installed by 1893 and the other in 1961. One of them features St. Lucy, aglow in all her yellow—robe, hair, halo. She holds both an exceptionally long sword, in reference to her method of martyrdom, and her eyes on a plate, looking down at them, seemingly content with her fate. Two yellow cords around her high waist allude, perhaps, to the cords wrapped around her when the team of oxen was attached to her to drag her off to her defilement. That’s a far cry from her privileged birth, alluded to her here by the fine red footwear.