What was this place?

At first, it seemed like a beautiful sprawling mansion in the town of Manitou Springs, Colorado. Or was it a Victorian insane asylum? From my position in front of this tremendous building, I couldn’t tell. It certainly was eye-catching, to say the least, but upon closer inspection, it looked a little confused, with a hodgepodge of nine different architectural styles that gives it a disjointed vibe. Of course, its history adds to the confusion: It has served six unique, and very different, purposes. Ultimately, I concluded that if one were to shoot a haunted house horror movie, this would be the ideal setting. And that was before I knew that, indeed, popular folklore abounds with incidents of ghostly apparitions and unexplainable phenomena occurring here. I couldn’t wait to find out more. 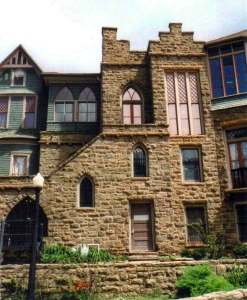 The jumbled fenestration of Miramont Castle.

My first impression—striking mansion—turned out to be correct, at least initially. Miramont Castle was constructed from 1895 to 1896 as a private home for Father Jean Baptiste Francolon. Born in France into a wealthy, aristocratic family, Francolon arrived in the United States when he was 24, landing in Santa Fe, New Mexico, and operating several missions to the indigenous peoples. Escalating tension between the fading Spanish Catholic Church and the newly arrived French Catholic Church caused problems, and the unpopular Francolon seems to have made things worse: An attempted homicide by poisoning hastened his exit to Manitou Springs, famed for its healing waters and clear air that he hoped would restore his health. His mother followed a short time later, and a few years after, Fr. Francolon had Miramont built for himself and his mother as well as her four French-speaking servants.

While traveling around the world with his diplomat father before his arrival in North America, Francolon had begun to mentally store away architectural ideas from different countries and eras, and it seems he wanted to employ them all at once for his castle. He spent hour after hour going over his detailed ideas with his contractors, from the castle’s two-foot-thick green sandstone walls to its indoor plumbing and electricity when both utilities were fairly new and luxurious.

I could have only imagined the frustration on the part of the builders who were trying to erect a cohesive structure. Francolon wanted crenellated battlements at each end of the castle, making it look like a medieval fortress. In some sections, the stone walls rise all the way up to the roofline; in others, however, they’re replaced by Flemish stepped gables, or by shingle-style Queen Anne elements, or by half-timber English Tudor features. There’s a Gothic front door, but there’s also Venetian ogee windows. Throw in some Romanesque, Elizabethan, Byzantine, and Moorish components, and you’ve got yourself one heck of a batty building.

As Miramont rises up the mountain on which it was built, you can find 10 entrances granting direct access to all four floors from different elevations. I stepped inside through the main entrance on the ground floor and walked into Victorian splendor, frozen in time, right down to the January 1915 wall calendar. 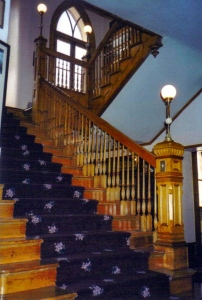 An elegant staircase fit for a king, or a 19th-century priest.

With 46 rooms spread out over 14,000 square feet, there’s plenty to see at Miramont. Francolon led a privileged life that was hardly sacerdotal, with local newspapers of the time describing the extravagant furniture, tapestries, paintings, antiques, and artifacts he had throughout his home. But things were not as rosy as they seemed: Financial losses prompted the contractors to sue Francolon for payment, forcing the priest to take out a loan on the property. Unpopular, again, with the local residents (despite his fundraisers for a hospital and for the poor), Francolon and his mother abruptly abandoned Miramont and Colorado in 1900, hauling much of their possessions with them and never returning.

They did, however, leave behind some of their bounty, like the furniture and a carpet that had been commissioned by King Umberto of Italy. But the building itself is the real draw. I didn’t know what to think of Francolon as I explored his old home. Was he a genius, or a madman? Finding a room with four corners is virtually impossible. Instead, I made my way through eight-sided rooms and a 16-sided room. Sixty windows of various styles—one staircase alone is illuminated by three different styles—allow plenty of light to penetrate the rooms and hallways, yet I still felt a bit of darkness and shadowy spookiness. Curiosities include the huge horseshoe-shaped archway between two rooms, the massive 40,000 lb. fireplace, and underground tunnels and escape routes that stemmed from Francolon’s paranoia that he’d need these, a leftover fear from having immigrated from France during a time of revolution and unrest.

After the Francolons took off, Miramont remained unoccupied for four years, until the Sisters of Mercy, who had been running a sanitarium for tuberculosis patients on Francolon’s property, purchased it in 1904. When their original structure burned down in 1907, the Sisters moved their patients into the castle and operated the Montcalme Sanitarium here until 1928. Renowned for their spotless rooms, generous table settings, and tender care of TB patients, these Sisters also broadened the cultural interests of Manitou Springs society, offering mandolin, guitar, and banjo lessons.

The enormous fireplace weighs as much as a Greyhound bus.

Alas, economic realities soon clouded Miramont, and the Sisters could no longer run the sanitarium. The castle morphed into a boarding house for the wealthy, a vacation and retreat house for clergy, and, during World War II, residential apartments, until it was abandoned yet again. In 1946, the Sisters sold it to a private owner. Thirty years later, it was added to the National Register of Historic Places.

Now operated by the Manitou Springs Historical Society, Miramont transcends its raison d’être as a historic house museum by throwing in displays as eclectic as the house itself: exhibits on the Manitou Springs Volunteer Fire Department, mid-19th-century maps, the last trial at Nuremberg (presided over by a Colorado Springs judge), the spoils of war (from the Civil War to today’s conflicts), and the Pikes Peak International Hill Climb, the second-oldest motor sports race in the United States.

If you need a little time to figure it all out and put Miramont into some sort of uniform context, take a seat in the Queen’s Parlour Tea Room for high tea and your mental reflections. You may not be successful in your thoughts, but you’ll certainly be happy that you visited this unique attraction.