I first started to admire the perfection of the dome as an architectural element years ago when I noticed how many U.S. state capitols had them: 39 out of 50. Of course, domes have been an essential building component for centuries, long before the United States even existed, such as the 2,000-year-old dome at the Pantheon in Rome. They take myriad shapes, from beehives to onions to saucers, and top everything from government buildings to churches to sports arenas. These are my favorites. 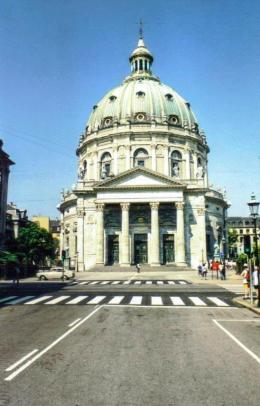 The massive dome of “the Marble Church” lured me through the expansive square that’s home to Amalienborg, the 18th-century palace in the heart of the Danish capital. The closer I got to this Evangelical Lutheran church, the more impressive the dome became. Originally designed by Nicolai Eigtved in 1740, Frederik’s Church wasn’t completed until 1894, long after Eigtved’s death and countless delays that shunted it aside as an abandoned ruin for more than a century. Today, this beautiful building is a masterpiece, and its dome — the largest in Scandinavia, with a span of just over 100 feet — truly inspires awe. Resting on a dozen pairs of columns and modeled after the dome at St. Peter’s Basilica in the Vatican City, the gold and verdigris-green dome soars heavenward. At the bottom, windows rest above balustrades and pairs or urns. A series of lucarnes punctures the circumference of the middle of the dome, and another series of windows circles around the top. An almost playful lantern stands atop the dome, with wreaths and garlands ringing the walkway around it and with its own dome that echoes the major one below it, all capped with a metal cross atop yet another metal copper cross. Inside, murals of the 12 Apostles occupy the panels between the dome’s ribs, and rays of golden light beam out from the oculus against a blue background. An integral part of the skyline of Copenhagen, this dome may not be particularly well-known outside Denmark, but that lack of familiarity makes seeing it for the first time even more exhilarating.

Unlike the dome atop Frederik’s Church, the domes of St. Mark’s Basilica — all five of them — are best viewed from a distance; the closer you get, the more they retreat behind the façade’s gables. For the best view, either head to the upper-floor windows of Correr Museum on the opposite end of the Piazza San Marco, or ascend to the top of the Campanile di San Marco just outside its doors. Also unlike Frederik’s Church, St. Mark’s domes are startlingly plain on the outside. Shaped in the form of a cross, the lead-covered wood domes bear no decorations, and aside from some minor variations — two are taller than the other three, and the lanterns and the crosses that crown them are a tad different — they’re identical. The beauty of the domes lies inside, and once you finally enter the basilica (get there early in the morning — the lines are tragic), you’ll be completely stunned. The golden glow of the 86,000 square feet of mosaics all around you, largely completed in the 13th century, bathes the entire interior. Look up into the domes to see gorgeous depictions of the Ascension of Christ, Pentecost, the 12 apostles, the story of Adam and Eve, angels, and other Biblical figures. Try to ignore the crowds and let them pass you by — you’re going to want to stare at these magnificent achievements for a long time.

Following the Great Fire of London in 1666, architect Sir Christopher Wren went to work rebuilding the city, and one of his masterpieces is the iconic St. Paul’s Cathedral, which replaced the cathedral of the same name that was gutted in the conflagration. History enshrouds this Anglican cathedral, from Winston Churchill’s funeral to the wedding of Prince Charles and Lady Diana to photographer Herbert Mason’s famous shot of the dome — St. Paul’s Survives — still standing proudly amid the smoke of fires and exploding bombs during The Blitz in World War II. That dome made the church the tallest building in London from 1710 to 1967. At a height of 278 feet (and width of 112 feet), the dome is one of the highest in the world as well as the world’s second-largest cathedral dome, weighing about 65,000 tons. Inspired by the dome at St. Peter’s Basilica in the Vatican City, Wren designed the dome with a continuous colonnade encircling the drum, with niches between the columns in every fourth opening. A balustrade balcony rests on top of this peristyle, with pilasters and rectangular windows. Then there’s the lead-covered ribbed dome itself, which is topped by an 850-ton lantern that’s capped by a cross on a golden ball. Paintings of scenes from the life of St. Paul cover the interior of the dome, set in eight arched niches — a wonderful example of artistic trickery, as the 3D architectural elements of the paintings are, indeed, flat.

Crossing over the Umberto I Bridge above the Tiber River in Rome, I caught my first sight of St. Peter’s Basilica in the Vatican City, about a 15-minute walk away. I stopped for a bit to admire the view of one of the world’s most recognizable buildings. Both inside and out, this basilica teems with memorable elements, but its dome is certainly the great eye-catcher, visible from so many vantage points throughout Rome. In 1547, Michelangelo designed the dome, one of the world’s largest, at nearly 138 feet wide — and its tallest, at just over 448 feet. His death in 1564 preceded the completion of the dome, which didn’t occur until 1590. The dome rests on a drum of pairs of columns, a ring of garlands, and rectangular windows topped with either pointed or rounded arches. The lowest series of windows in the dome reflect the alternating arches of the windows in the drum, and two more series of windows pierce the dome above them. A crown-like lantern is topped by a gold ball and a silver cross, the latter of which holds two lead caskets, one of which contains a fragment of the True Cross and a relic of St. Andrew. Inside, the dome soars above the altar and the fantastic baldacchino. Circling the base, it’s easy to read the 4½-foot-high letters of the Latin words from Matthew’s Gospel that translate to “You are Peter, and on this rock I will build my church…I will give you the keys to the kingdom of heaven,” and circling the base of the lantern, the Latin for “To the glory of St. Peter; Sixtus V, pope, in the year 1590, the fifth of his pontificate.” In between the two, the dome is divided into 16 segments filled with 96 figures: the 16 popes buried in the basilica, cherubim and seraphim, angels bearing the instruments of Jesus’ Passion (such as the cross, pillar, and whip), the apostles and evangelists, Jesus, Mary, Joseph, and St. John the Baptist. Painted onto the base of the lantern is God himself, clad in red and blue and resting on a cloud, his arm outstretched to anyone standing a few hundred feet below Him. 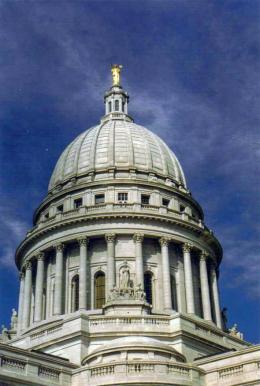 I drove into Madison after dark had fallen. On my way to my bed and breakfast, the Mendota Lake House B&B, I had my initial view of the Wisconsin State Capitol, awash in lights and blazing white against the black night sky. The capitol retains its grandeur in the clear light of day, as I found during my visit the next day. Completed in 1917 as the tallest building in the city, the capitol continues to claim that statistic thanks to a 1990 state law barring any building within a mile of the capitol from being taller than the base of the columns supporting the dome. The dome, clearly modeled after the dome of the U.S. Capitol in Washington, D.C., with its columns, windows, and ribs, dominates the four wings of the capitol, rising 162 feet above them. Constructed of Bethel white granite from Vermont, the dome claims a host of impressive records: It’s the largest dome by volume and the only granite dome in the United States, and one of the largest domes — and the largest granite dome — in the world. Topping the lovely lantern, sculptor Daniel Chester French’s gilded bronze statue Wisconsin stands 15½ feet tall and weighs three tons. The left hand of the female figure holds a globe with an eagle perched on it. Her outstretched right arm symbolizes the state motto (“Forward”), and she wears a helmet topped with a badger, the state animal. Inside, the coffered interior of the dome leads up to the mural Resources of Wisconsin, depicting the state as a female figure, resting upon clouds and surrounded by other female figures holding examples of the state’s bounty, and the entire painting encircled in a ring of leaves and eight Ws.