Your private chalet comes with an astounding view.

Namibia’s accommodations were proving to be as varied, and as wonderful, as the country itself. I had acclimated myself to my first African country at the Villa Vista Guesthouse in Windhoek before checking in to the terrific Lüderitz Nest Hotel in Lüderitz, the Desert Homestead Outpost (a fantastic desert camp in Sesriem), and the top-notch business-class Strand Hotel in Swakopmund. Now, after driving north up the coast of the country and spotting one of its famed shipwrecks rotting in the Atlantic Ocean, I headed inland, cruising through valleys edged with mountains and rocky piles, with occasional donkeys, goats, ostriches, and a hyena or two along the road. The day’s journey of 273 miles ended when I arrived at the turnoff for my next accommodation. Past a tiny, impecunious community of lopsided tin shacks and semi-unusable cars, I made the approach to Doro Nawas (“the place where rhinos once lived”), smack in the middle of nothing in the Damaraland region.

I drove for nearly three miles to the main building atop a rocky outcrop, guarding the flat savannah all around for measureless distances. I was quickly greeted with a revitalizing fruity drink and a refreshing towel, followed by an impromptu welcome song from half a dozen ingenuous staff members. This latest gesture of hospitality impressed me just as much as all those that had preceded it, reinforcing my opinion that Namibians were some of the friendliest people I had ever met. I was also delighted to learn later on that most of the staff are local citizens, making the camp a good neighbor and a socially conscious employer. 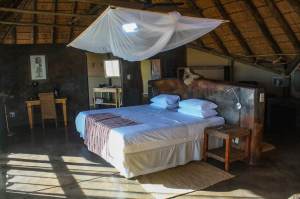 Having been completely bowled over by the first desert camp I stayed at, my expectations for Doro Nawas were high, and it didn’t disappoint. Like the Desert Homestead Outpost, the main building houses all the common facilities, like the dining area and the pool, and the sleeping accommodations were in private cabins, here called chalets. Mine had a huge picture window through which I would view the great expanse in front of me from my bed, with a massive stone headboard, every evening as I was lulled to sleep by the silence and every morning, when I would lazily watch the sunrise. My chalet, one of only 16 individual units that encircle the outcrop on which the main building perches, also had canvas walls, wood and glass doors, screened windows with canvas blinds, a thatch roof, an indoor shower, and an outdoor shower at the end of the stone veranda with iron chairs. Everything combined to ensure a peaceful respite, except for the one item that raised both my eyebrows to my hairline: an aerosol can of Doom. I wondered what kind of creature I would have to battle using this bug killer with the ominous name…

I turned to more pleasant pursuits with a late-afternoon dip in the ice-cold water of the pool before retiring to a chaise under the covered poolside area and watching the mountains change colors from tan to brown to purple as the sun slowly sank. Upon returning to my room, I found a little postcard on my pillow, as I would every day I stayed here. The short stories or handwritten messages on the reverse side were a wonderful, personal touch that I appreciated immensely, and they always put me in a great mood on my way to dinner. My first evening meal here was positively delicious: pea soup with bacon and cheese sticks, fruit-stuffed pork with mustard sauce, cauliflower and zucchini, and creamy polenta, along with a South African cabernet sauvignon. Completely sated, I headed outside and plopped down into an oversized beanbag chair next to the firepit burning logs of mopane, releasing a pleasant aroma, until I could start to hear my bed calling for me. On my way there, I crossed paths with a cricket, a praying mantis, and a spider, all freakishly large. Fortunately, they remained outside my chalet, and the can of Doom went unused. 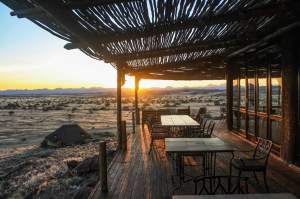 Although it’s tempting to remain at such a wonderful camp the entire time you stay here, there are other things to see, and Doro Nawas is located in the perfect spot for many of them. Up early the next morning, I headed out with a guide for an elephant hunt (of the photographic kind, not the barbaric gun kind). On our way to their usual hangouts, we passed by scores of springbok, and the guide was quick to point out birds like the Cape dove and the southern yellow-billed hornbill. We spent the morning tracking three herds of desert-adapted elephants, during which time I learned how to identify which side of each elephant is its dominant side. Their methods of protecting their babies heightened my appreciation of their parental care, and I was taken aback by the softness of their footsteps. 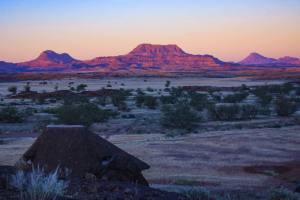 I was tempted to hang around Doro Nawas after the morning’s excitement, but now there were fake elephants to see at nearby Twyfelfontein. Clambering around and over rugged rocks, I became one of the 150,000 visitors to come here annually to marvel at the 6,000-year-old petroglyphs depicting watering holes, instructional images of animal feet used for tracking, and such animals as elephants and giraffes. Here at Africa’s most-visited rock art site, I was surprised to also find carvings of a penguin and a seal, which proved that the inland people who had etched these images into sandstone rocks were nomadic and had ventured to the Atlantic coast, about 100 miles away.

Back at Doro Nawas, I practically ran into a spotted-backed jackal outside the main building. We both stopped and stared at each for a couple of minutes, probably for different reasons (I can’t speak for him, but I was left wondering what one does when one is that close to a jackal), until he became bored with me and moved along, allowing me to continue on my way to watch another brilliant sunset from the covered terrace before the night’s special dinner. The staff distributed lanterns to all the guests — about 10 of us — and led us just after dusk for about a quarter-mile walk to an opening behind a tremendous rock. The setup was shockingly and gloriously romantic: One long family-style table, a firepit already ablaze for tonight’s braai (barbecue), and bagged lanterns ascending the base of the hill next to it. As I took my seat between a Swiss couple, a few Germans, and two members of the staff who joined us, a waiter and a waitress announced the evening’s wine choices — he in English, she in one of the regional click languages, a fascinating and truly weird form of vocal communication. I feasted on a remarkable meal of spiced cauliflower soup with fresh garlic bread, barbecued beef with a red wine sauce, barbecued chicken with a curry sauce, basmati rice, vegetable risotto, and carrots and beets, along with a couple of glasses of red merlot. A to-die-for dessert — a peppermint crisp ice cream tart — capped off this fantastic dinner. 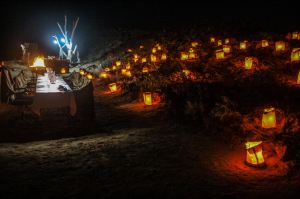 I headed back to my cabin under a star-filled sky, where I spied the Southern Cross and the entire, and enormous, constellation of Scorpio. Inside, I also spied the African-sized black wasp sitting atop my bed’s headboard. It was time to break out the Doom.

After a continental breakfast the following morning, which included juices and yogurts, muffins and toast, and omelets with cheese, ham, and mushrooms, it was, sadly, already time to check out. But not without a final sendoff from the staff, a goodbye song to keep me joyful on my 200-mile drive north and in my memories of this remarkable accommodation. It was yet another reason why staying at a desert camp is one of the top five things to do in Namibia.