Founded in 1821 and named for future U.S. President Andrew Jackson on lands that were part of the territory occupied by the Choctaw Nation, the capital of Mississippi was on an upward trajectory until 1863, when Union forces burned down most of the city during the Civil War. Nicknamed “Chimneyville” because house chimneys were just about the only things left standing, Jackson began its reconstruction, often deviating from its original checkerboard pattern, alternating city blocks with parks and open spaces. It has come a long way since then. Although it’s almost completely devoid of antebellum buildings thanks to the war, the city still has a core of terrific structures that made it a very worthwhile day trip while I was staying in nearby Vicksburg. These are my favorites.

Jackson’s most impressive building was also the first one I explored. Replacing the already existing capitol, this new building was completed in 1903 as a wonderful Beaux Arts structure on 13 acres. At the time, a lawsuit for $1 million in back taxes owed by the Illinois Central Railroad resulted in a victory for the state, which funneled the amount to the limestone and granite building’s construction and enabled it to erect the capitol with a tiny outstanding balance of only $93,641. Welcoming benches fringe the leafy approach to a replica of the Liberty Bell and the Women of the Confederacy Monument, dedicated to the mothers, wives, sisters, and daughters who surrendered their men to the misguided Southern cause. A huge three-tier staircase leads up to the main entrance, a portico with half a dozen Corinthian columns supporting a wonderfully sculpted pointed pediment with 14 figures representing the arts, industries, and resources of the state. Behind and above it rises the dome, reaching to a height of 180’ above ground level. Ringed by fluted Corinthian columns, balustrades, and windows, the dome culminates in a cupola topped with an eight-foot-tall copper American bald eagle coated in gold leaf. I stepped inside to an interior vastly improved during a major painting program of the Civil Works Administration during the Great Depression in the early 1930s. More than 10 types of marble from various states and countries embellish the interior, as do grand staircases, 750 of the original 4,750 electric fixtures used to illuminate the building, and stained and leaded glass, including in the domes of the Senate and House of Representative chambers. I was most impressed by the main rotunda, with its white Italian and black Belgian marble, cast-iron balustrades, three orders of columns, paintings from the 1930s upgrade that represent Mississippi’s history, and relief sculptures of a blindfolded Lady Justice at the top of each arch at the base of the dome’s drum. All of it combines beautifully, making it quite easy to understand why it was added to the National Register of Historic Places in 1969, designated a Mississippi Landmark in 1986, and made a National Historic Landmark in 2016.

The oldest building in Jackson served as Mississippi’s statehouse from when it was completed in 1839 until the new capitol replaced it in 1903. For the next 13 years, the building remained abandoned until it was renovated for state office space. Once all the state agencies moved out by 1960, it underwent another renovation, this time as a historical museum, which it remains today. The three-story Greek Revival building of brick, limestone, and stucco is simpler than its successor but does not lack some wonderful features. The ground-floor arcade supports two-story Ionic columns above it, which, in turn, support a plain pediment. Understated but attractive lintels cap the windows on the second and third floors, and the whole mass is capped by a copper dome and cupola, both aged into verdigris green. Inside, a sprinkling of brick partition walls and flagstones on the rotunda floor complement the abundant use of wood. Fluted Corinthian pilasters separating plain panels and ocular windows on the inside of the dome lead up to recessed coffers and a skylight that looks like a game of Tic-tac-toe that X is about to win. As a museum, the building houses exhibits that trace the history of events that occurred here, such as Mississippi’s secession from the Union in 1861, the crafting of the state’s constitution in 1890 that still is intact today, and the passing of the nation’s first law that permitted married women to own their own property, way back in 1839. A Mississippi Hall of Fame honors some of the state’s most distinguished citizens, including civil rights activist Medgar Evers, musician Muddy Waters, Dr. James Daniel (team leader for the first lung transplant), and Annie Coleman Peyton, who was a driving force for the creation of the first land-grant college for women in the United States. Like the new capitol, the Old State Capitol won an architectural trifecta: It is also on the National Register of Historic places and is both a Mississippi and a National Historic Landmark. 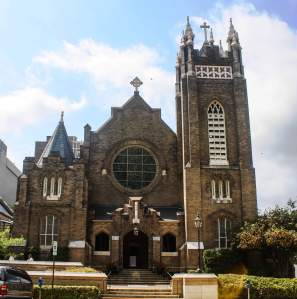 Located in the heart of downtown Jackson, St. Andrew’s Episcopal Cathedral draws you to it with its fine architecture, beautiful interior, and much-appreciated air-conditioning. I approached this asymmetrical brown-brick Gothic Revival cathedral, completed in 1903, via a gentle staircase leading up to the arched entranceway. Above, a large circular stained-glass window rests under an unusually stepped gable roofline. To the left, there’s a squat tower; to the right, a taller bell tower capped with white finials and a white cross. Inside, I followed the wood pews carved with trefoils that march up to the marble altar. On either side, clustered columns support arches with an Arabic hint, leading to a clerestory and then the wonderful beamed ceiling. Deeply vivid stained-glass windows started to replace the original amber windows in the 1950s, all given as memorials, including the one with one of the world’s top five depictions of Palm Sunday. Above them, the simple wood Stations of the Cross tell the story of the Passion of Christ. Throughout the cathedral, keep an eye out for several X-shaped crosses, the emblem of St. Andrew.

Unlike today, the completion of an 11-story building in 1924 Jackson was big news. When the Lamar Life Building, originally the Medical Building, opened that year, it was the first skyscraper in Jackson and the tallest building in the city, a title it retained for only five years. Today, it’s still in the city’s top 10. I couldn’t help but notice its striking resemblance to New York’s Woolworth Building, thanks to its Gothic Revival style, stepped-back design (the first of its kind in Mississippi), and white terra-cotta cladding. Slender ribs rise upward to a blind arcade and tracery-filled balustrade. Gargoyles and sculpted heads peer out over the city. Listed on the National Register of Historic Places in 1976, the building remains relevant today via its transformation into Lamar Life Lofts, a mixed-use reimagination that combines ground-floor retail space, a few floors of offices, and 23 apartments on the top five stories. The iconic clock tower, at a height of 191’, bears a clock face on all four sides and, as part of the renovation, now keeps everyone on time once again.

Of the 50 governor’s mansions in the United States, Mississippi has the second oldest, continuously occupied since 1842. I approached the two-story Greek Revival building through its well-kept grounds, with flower beds, a rose garden, and a gazebo. A series of stone steps lead to a semicircular portico with four fluted Corinthian columns. The white façade and black shutters lend an air of quiet Southern dignity — but not without some Northern interruption. After functioning as a hospital for wounded Confederate soldiers during the Civil War, conquering Union hero General Sherman usurped it as his temporary headquarters, and, post-war, Union officers occupied the building for a while. Since then, the mansion has undergone renovations and expansions. Despite the updates, stepping into the mansion is a bit like time traveling. A plethora of antebellum furniture, carpeting, fireplaces, antiques, and lighting fixtures keeps the Old South charm alive, earning this governor’s mansion a rightful designation as a National Historic Landmark in 1975.