A sizzling summer always conjures up the color red, whether it’s the abundance of mercury in a thermometer or some serious cases of sunburn on usually pale beachgoers. It attracts the human eye more than any other color—it’s the first color a baby can see, and it appears on more national flags than any other. It’s a passionate color, associated with love, lust, danger, evil, and heat. But it’s also a cool color, in a non-temperature kind of way, that really stands out in some wonderful forms and locations that have nothing to do with summer heat. These are my favorites.

King’s Garden (Kungsträdgården), originally a vegetable garden for the royal castle in the 15th century, remains a popular gathering spot in Stockholm, especially during long summer days when Swedes and visitors alike gather at this green space with its fountains, trees, bandstand, shallow pool for dipping your toes, and the restaurants flanking it. Abutting the garden, St. James’ Church—one of the most beautiful churches in Stockholm—makes a bold statement with its brilliant red-plastered brick façade. Sankt Jacobs Kyrka looks different from every angle, thanks to the exceptionally lengthy period of construction, from 1580 to 1643, which lends it a composition of Late Gothic, Renaissance, and Baroque styles. The enchanting central tower, with four clock faces, four bells, four little dormer-like windows at the corners, and a lovely lantern topped by a gold cross, dates from 1739, inaugurated following a fire in 1723 that destroyed the roof, which, once replaced, was again renovated in 1910 with a new one in copper. Two octagonal towers flank the west entrance. Carved sandstone portals granting entrance to the church on three sides were added in 1644, the southern one featuring sculptures of Moses and St. James. During the 1770s, the exterior was repainted in a gray-white color, a mistake that was happily corrected during restorations in the late 1960s that brought back the red color. This church holds a special place in my mental travelogue, not only for its beauty, but also because it’s dedicated to St. James the Greater (Swedish uses the same “Jacob” for both James and Jacob), who was one of the Twelve Apostles and the patron saint of pilgrims, and who just happens to share a feast day with St. Christopher, patron saint of travelers. 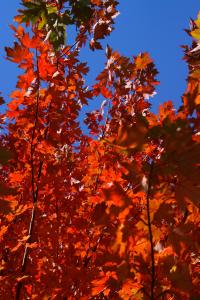 Leaf-peepers, the somewhat derogatory term assigned to non-New England folk who invade its six states every autumn, shouldn’t be deterred from visiting because of an insignificant slight. Autumn sets many areas of the United States ablaze in gorgeous colors, and New England is a prime destination to witness nature’s annual show. Vermont’s foliage is particularly striking. Its fall foliage season generally runs from mid-September through most of October. Green trees morph into spectacular flares of yellows, oranges, and fiery reds that carpet entire hillsides. The red color arises from the production of certain pigments called anthocyanins in the fall, when sugars are trapped in the leaves. As the overpowering green chlorophyll fades in the cooler season, the red pigment takes over, and leaves on the state’s basswood, pin cherry, and red maple trees burst into this seductive color. You don’t have to head to the hills or the country to see them. No matter where I went in Vermont—from the city streets of Montpelier, to the shore of Lake Champlain in Burlington and of Waterbury Reservoir, to the hiking trails in Little River State Park and Mount Mansfield State Forest, to the scenic roads around Stowe—this beautiful autumn color erupted in glorious abundance. 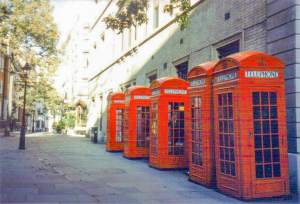 They’re an endangered species, but, for me, the red phone booths of London will always remain an integral part of the city’s fabric. As smartphones rapidly do away with the need for public telephones, many of these red phone booths are disappearing for lack of use—fewer than 30,000 calls were made last year from these kiosks last year in all of England, and the number is steadily declining. At their peak, there were about 70,000 red telephone boxes in the United Kingdom; today, only about half remain. Designed in 1921 and painted red to make them easy to spot, these enclosed kiosks enabled callers to talk with much of the street noise blocked out. Over the decades, they have evolved into many different designs. A prominent royal crown was added to the design in 1926. The K6 model, introduced in 1935, was the most prolific. Fortunately, some have been protected by law. And some have been completely repurposed. Instead of a telephone, some contain emergency defibrillators; others act as mini-libraries. All of that guarantees the survival of these iconic conveniences that were voted the greatest British design of all time in 2015.

Even on very-often overcast days in Bergen, Norway (one of Europe’s wettest cities, with some amount of rain falling, on average, on 239 days every year), the old Hanseatic warehouses lined up on Vågen Harbor present a cheery profile. A UNESCO World Heritage Site since 1979, these wooden buildings were originally erected in the 1300s. Rebuilt after destructive fires in 1702 (on stone foundations from the 1200s) and 1955, they provide an accurate picture of medieval Bergen. Formerly used to store goods such as stockfish and cereal when the city was one of the largest trading ports in Northern Europe, today these white, yellow, and wonderful red gabled buildings with tile roofs are home to museums, pubs, restaurants, and shops. Everything looks a bit slanted, and some tilt just a little, leaning against their neighbor like one who was imbibed just a bit too much during the annual Constitution Day parade that marches right in front of them on the cobblestone street every May 17. 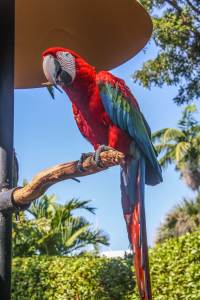 I love macaws. They’re one of my favorite birds. They’re smart, they’re loud, they speak human languages. They squawk, squeak, and scream—sounds that can carry up to several miles to call to their groups. And, of course, they’re beautiful, and it’s rather sad to know that they’re listed as an endangered species. The scarlet macaws at Miami Seaquarium, however, are doing just fine. Most of their plumage is a brilliant red—their heads, underbellies, upper wings, and much of their long tails; the rest is a rainbow of yellow, a touch of green, and shades of blue. Their natural behaviors are endlessly entertaining, and you can observe them, unobstructed by cages or nets, as they eat, preen themselves, and jauntily bounce from one foot to the next in some fascinating parrot dances on branches of fake trees under giant lampshades that provide some relief from the heat. With a life span of up to 80 years, these red beauties are guaranteed to be here for a very long time.