Canada has more than 2,300 museums, and they run the gamut from the dynamic to the bizarre, from world-class art and history institutions to establishments that celebrate tractors or potatoes. I found the exhibit on sleep in Québec City’s Museum of Civilization to be wonderfully wacky, but the installation art in the Vancouver Art Gallery seemed to be utterly pointless. I didn’t stop at the Shoe Museum in Toronto, but I did spend some time in the Canadian Centre for Architecture in Montreal. After nearly a dozen trips to Canada, I can safely say that these are my favorites.

On a very brisk morning, I hurried across the Alexandra Bridge over the Ottawa River from the nation’s capital to Gatineau, Québec. From the bridge, I admired the eye-catching Canadian Museum of History, constructed in 1989 with no straight lines or sharp angles. The architect, of Blackfoot heritage, created an alluring building of flowing, undulating curves in accordance with his culture’s tenet that evil spirits lurk in corners, so he designed a building without any. Formerly called the Canadian Museum of Civilization, the country’s largest cultural institution attracts well over one million visitors per year. A grand staircase leads to a spacious plaza and the Public Wing, with its wall of windows, copper domes that are gradually turning green so that they’ll match the roofs of the gorgeous Parliament Buildings across the river, and main entrance that resembles the head of a turtle, the native symbol of Mother Earth. Inside, more than a dozen totem poles from the First Nations peoples along the coast of British Columbia stand in the Grand Hall, the museum’s centerpiece. From here, you enter the First Peoples Hall, which presents more than 2,000 images of and articles from the indigenous peoples in Canada, describing everything from traditional medical practices and remedies to hunting strategies. The hall funnels visitors into the Canadian Stamp Collection, which traces the country’s philatelic history and contains every stamp it has ever issued. Upstairs, in Canada Hall, 1,000 years of the nation’s history unfold in chronological order, starting with exploration by the Vikings and moving on to “Once in French America,” which examines everything French during their colonial days in Canada; replicas of whaling and fishing boats; immigration and the expansion west, including an Alberta streetscape with an oil well, grain silo, and Ukrainian church; and finishing in Vancouver’s airport. You can easily spend a full day here, at least, but if you still have time, the IMAX theater provides a comfortable place to relax while watching an always-riveting feature. By the time you leave this museum, you will have received a thorough and very enjoyable education about this mammoth country.

On the sprawling campus of the University of British Columbia in Vancouver, the world-renowned Museum of Anthropology boasts more than half a million objects. Temporary exhibits have ranged from Peruvian silver to awareness and cultural response to AIDS in rural Malawi. But it’s the permanent exhibit I was here to see. The museum’s collections include archaeological material and ethnographic items from around the world, but the big draw is its display of more than 7,000 articles from the aboriginal peoples of coastal British Columbia, the First Nations people. Artifacts such as anklets for dancers, harpoon heads, transformation masks, and walking sticks provide a comprehensive look into their culture and belief system. Of course, there are totem poles as well — the museum has the best collection in the world. Six different types of totem poles can be carved with sculptures representing everything from the story of the family who owns them, to the history of a certain clan, to familiar legends, with each creature symbolic of something else. On the grounds of the museum, a re-creation of a traditional Haida village with a longhouse, mortuary house, and 10 totem poles puts everything in perspective. This is by far the best place to learn about and appreciate a people who believed that a dream catcher placed near a cradle would catch and filter out bad dreams before they reached a sleeping baby, and that a coyote could transform itself into a human.

One of the largest museums in western Canada (with a curiously small parking lot), the Royal Alberta Museum is a terrific way to pass some time on a frigid day in Edmonton. Three permanent exhibits focus on natural history, with impressive bird mounts, sublimely colorful gems and minerals, and some of the largest, most exotic, and most hideous live insects; 11,000 years of aboriginal culture; and a series of dioramas depicting Alberta’s wild animals and ecosystems. Temporary exhibits can range from the province’s oil industry to souvenir postcards of old Ukraine, but the best one is the annual Wildlife Photographer of the Year galleries. Since 1965, this international competition has been recognizing the stellar work of adults and of young adults who take some surprisingly accomplished pictures for people their age. The exhibit sets forth stunning photos of nature at its most riveting: a scorpion in strike mode, a pride of sleepy lions atop a rocky outcrop in Tanzania, an otherworldly squid, a terrifying, apocalyptic lightning storm during a volcanic eruption in Chile. This exhibit runs for a few months, winter into spring, so make sure you time your visit accordingly; it’s not to be missed! 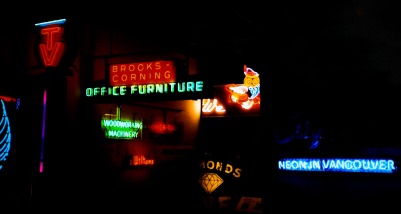 At the edge of Vanier Park, the Museum of Vancouver perfectly brings to fruition its mission: “To hold a mirror to the city and lead provocative conversations about its past, present and future.” You can learn about the history and development of metropolitan Vancouver through the items in its permanent collection — historic street signs, memorabilia of the influence of Scottish immigrants, buttons for Greenpeace (which was born in the city), signs for the city’s steel industry, photographs of old streetscapes, Chinese dragon heads, and the first gas pump in Canada (1907). The colors and incessant hum of neon lights assault your senses in a special exhibit, “Neon Vancouver | Ugly Vancouver,” which showcases a wide variety of neon signs that kept the city glowing in the 1950s through 1970s, when there was one neon sign for every 18 Vancouverites — about 19,000 in total. While some felt that the signs, ranging from the names of hotels and office furniture stores to the Smilin’ Buddha Cabaret, signified the excitement and glamour of Vancouver, many thought this razzle-dazzle was an unbecoming, tawdry display that besmirched their city. The “good taste laws” that were enacted favored the latter, resulting in civic controversy and a city that doesn’t flicker quite as garishly as it did a few decades ago. If you love Vancouver — and you know you do — this museum will give you an even greater appreciation for one of Canada’s greatest cities.

Who doesn’t like money? And who hasn’t admired the artwork on currency from countries around the world? You’d be hard pressed to find many people who don’t, and that’s why the Bank of Canada Museum is a great place to visit. Although the name of the museum is misleading and a little off-putting (who really wants to see a museum about BoC?), its holdings are not. Its former name, the Currency Museum, is actually more representative of what it contains. More than 110,000 objects — bills, coins, cash registers, production and engraving tools, counterfeits, wallets — comprise the collection of 2,000 years of numismatic history. From modern bank notes, to a two-sou French coin from 1757, to the impractical three-ton stone used as currency on the Caroline Island of Yap, you’ll be fascinated by what people around the world use to buy stuff. If you ever had a coin collection as a child or an adult, or if you held on to a note or coin from an exotic destination as a souvenir, you’ll love this museum.

4 thoughts on “Top 5 Museums in Canada”