As the urban gateway to the Black Hills, Rapid City is the ideal urban counterbalance to the easily accessible nature all around it. With a population that has been growing steadily since 1910, a variety of attractions and events have been proliferating for decades. Some are fairly new; some go back almost a century. These are my favorites >

#1 Meet All the U.S. Presidents 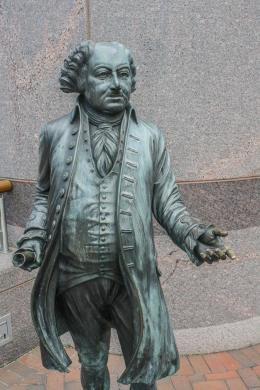 About 25 miles southwest of Rapid City, you can marvel at the massive heads of George Washington, Thomas Jefferson, Theodore Roosevelt, and Abraham Lincoln carved into Mount Rushmore. But what about the other 39 U.S. presidents? They receive their due along the streets of downtown Rapid City. City of Presidents is a permanent outdoor exhibit of life-size bronze statues of every person who has held the office of the U.S. presidency. Begun in 2000 by a local philanthropist who contributed the seed money of about $500,000, the project has been privately funded ever since. As I walked around, I kept bumping into the figures who have been shaping the United States, for better or worse, since Washington took office in 1789. Scattered on multiple street corners, the standing and sometimes seated statues, created by numerous sculptors, depict a key moment in the president’s administration or capture a defining personal trait. There’s Dwight D. Eisenhower attired in his military uniform, William Taft poised to throw the opening pitch of the major league season, James Polk next to a barrel that bears a banner with the expansionist slogan that won him the White House: “54° 40’ OR FIGHT!”, James Monroe tipping his top hat to passersby, John Tyler holding his violin, Harry S. Truman displaying the famously erroneous newspaper declaring Dewey the victor in the election, John Quincy Adams in full formal dress, and Franklin D. Roosevelt delivering his “day of infamy” speech behind a field of microphones. They’re all remarkable, and one of them is just a little eerie: John F. Kennedy is handing his young son a toy airplane. The synergism of history, sculpture, philanthropy, and a sense of patriotism culminate in what can truly be considered living art: Not only does the collection continue to grow (President Obama’s statue in slated to be inaugurated in fall 2017), but during the winter, residents playfully adorn the statues with hats, scarves, and other warm clothing to keep them toasty — and then to be collected for the homeless.

Just west of Rapid City, I found the oldest mine in the Black Hills area that’s open to the public, but, apparently, not many people know about it — I was the only visitor. After 20 years of unsuccessful drilling for gold, the mine was abandoned in 1900. Fifty years later, it was opened as a tourist attraction. I entered the 600-foot-long tunnel by myself. Along the path beside the rushing river, occasional lights illuminated veins of quartz that failed to lead to the sought-after precious metal. The farther I progressed, the darker, and the creepier, the tunnel grew. The sound of rushing water echoing off the damp walls became progressively louder as I continued deeper into the tunnel on my way to my final destination. At the end of the path, the Thunderhead Underground Falls tumbles down 30 feet to the river. The power of the falls is undeniable, producing enough mist to get you a bit dewy and a roar that’s simply overpowering. This rara avis is in danger of closing, so if you’ve never seen a waterfall under the surface of the earth, make sure you get here soon!

A family-owned operation since a young snake enthusiast opened it in 1937, Reptile Gardens has grown to become the world’s largest reptile zoo. Even if you’re not a particular fan of this order of animals, you’ll still love spending a few hours here, as the collection has expanded beyond just reptiles. Enter the first sky dome ever constructed in the United States and explore three levels of slithering snakes and their beautifully patterned skins, prehistoric-looking crocodiles, cute but deadly poison dart frogs, venomous lizards, and positively hideous bugs, scorpions, and spiders, all housed among exotic plants. If all of that makes your skin crawl, head outside to the rest of the gardens to find something more appealing. Stroll through the handful of small botanic gardens, run your hands along the shells of the resident giant tortoises, say hello to the majestic bald eagle, and enjoy the bird show with beautiful parrots and wise owls. End your time here with a few laughs with the always adorable and amusing prairie dogs. 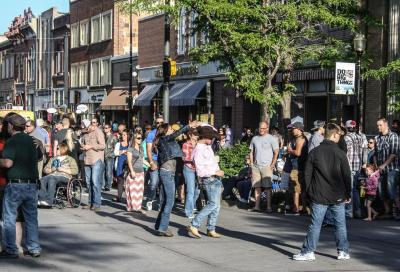 As soon as I finished an excellent Italian dinner at Botticelli, I walked a couple of blocks over to party with the locals. Every Thursday night during the summer since 2008, a few downtown streets come alive with the sights, sounds, and smells of one great big outdoor party. It seemed to me like half the city had shown up to partake in the Summer Nights festivities. Two bands — a Beatles cover band and one heck of a good country band — provided the music for men in cowboy hats and women in suede vests to dance by. Vendors sold plenty of street foods to snack on: kettle corn, crepes, corn dogs, and Philly cheesesteaks. Lots of beer flowed during for the three-hour event, yet not a single person imbibed too much, and, in a display of the residents’ civil-mindedness (or just plain good manners), no one littered so much as a napkin. Everyone’s here solely to have some fun, and joining them for a cold one and a well-executed two-step is a great way to end your day.

#5 Stay at the Hotel Alex Johnson

No ghosts visited me in the night, which was both a disappointment and a relief. Reputedly one of the most haunted hotels in South Dakota, the historic Hotel Alex Johnson in the heart of downtown Rapid City ensures a restful night’s sleep, unless, that is, the Lady in White or the ghost of Mr. Johnson himself visits you. Named after the founder, the vice president of the Chicago and Northwestern Railroad, the 10-story hotel opened in 1928 after only 11 months of construction. One of the tallest buildings in the city mixes German Tudor architecture with Plains Indian heritage. Listed on the National Register of Historic Places and included among the Historic Hotels of America, the Alex Johnson has been a favorite with Washington’s top man for decades: Presidents Coolidge, Franklin Roosevelt, Eisenhower, Nixon, Ford, and Reagan all stayed here, as did Alfred Hitchcock and the cast of North by Northwest while they were filming. The lobby provides comfortable leather chairs on the original brick floor from which you can warm up by the stone fireplace and admire the finely carved Indian heads at the base of the ceiling’s wood beams. The Vertex Sky Bar on the hotel’s top two levels boasts panoramic views of the city and the Black Hills for you to soak in while you sip a craft cocktail or enjoy a terrific dinner in an Art Deco setting. During fair weather, head outside to the patio and pull up a seat by a fire pit and watch the moonrise.